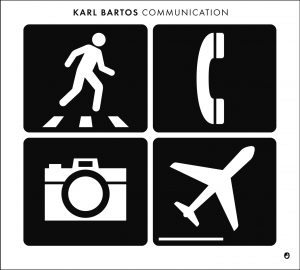 Founder Kraftwerk member Karl Bartos re-releases his 2003 debut solo album; re-mastered and expanded of course. Do you remember 2003? Certainly in 2003 Kraftwerk were an unfathomable presence on the music scene, the Internet had hit its stride, while hardly anyone Facebooked and nobody tweeted, mobile phones – not necessarily smart ones – were in our pockets, all the technical advancements that they had predicted in their records were coming true.

And where were Kraftwerk? Not in the middle of the white-heat of technology but hidden somewhere behind a simple Kling-Klang website that had absolutely no information about the band – How mysterious! How enigmatic! How Kraftwerk! They had retreated, Dietrich-like, to obsess over bicycles and lycra and no matter how much was rumoured about new work – nothing ever came. There certainly hadn’t been a Kraftwerk release since The Mix, a remixed compilation of their greatest hits in 1991, and certainly no new album since 1986’s Electric Cafe and the subsequent departure of Wolfgang Flür.

Karl Bartos departed the band shortly after the release of The Mix, frustrated with the increasingly slow pace of Kraftwerk’s output, spending his time collaborating with other artists. In 2003, and under his own name, he released Communication, which was unfortunately somewhat eclipsed by the out-of-the-blue release in the same year of Tour de France Soundtracks, by his former band and their subsequent Minimum-Maximum tour (documented in an excellent live album of the same name). Tour de France Soundtracks generated many an excited headline in the music press but was something of a divisive album, fans expecting something totally new were disappointed, while the record expanded on the ‘Tour de France’ single, it seemed as if Kraftwerk had been hermetically sealed inside a bubble in 1986 and that the dance music revolution – which they spurred in the 1970s – hadn’t happened at all. The technology had changed, you could buy off-the-shelf what once the band had to build for themselves, but the emperor’s clothes (indeed, Led Zep fans, the song) remained the same.

Those looking to Bartos for something different, and perhaps, a more regular schedule of output where, well…, also underwhelmed. Communication’s issue is that it sounds very much like Kraftwerk, too much like Kraftwerk in fact. It seems the apple hadn’t rolled all that far from the tree. You want vocoders? You got vocoders. You want technological subject matter? Check! You want a clean, processed, slick yet sophisticated Euro-pop sound? It’s here – and in spades.

So here we are in 2016 and Communication gets a re-release – I’m not entirely convinced that it requires one. Yes, the subject matter still stands – communication, technology, chasing fame, the integration of humans and computers – it’s all still relevant but the music is very much of its time, that time being 2003. While 1970s Kraftwerk sounded like the future, and to this day still does, Communication very much doesn’t. 2003 came and went, and so this record with it.

It’s not without its strengths – Bartos has a great ear for a pop-song, and it is very clear to see whose hand guided electro-pop classics like ‘The Model’, and in the brilliant song ‘Life’, we have a really classic pop song with a New Order like swagger (unsurprising given Bartos’ involvement with NO offshoot Electronic), but everything else is okay, just not really very memorable. there’s also a few misses – ‘Electronic Apeman’ is, excruciating. Did I mention vocoders? Oh lots of vocoders, all the vocoders, too many vocoders, which is a shame as Bartos has a very nice voice for pop, when not hidden behind the effects.