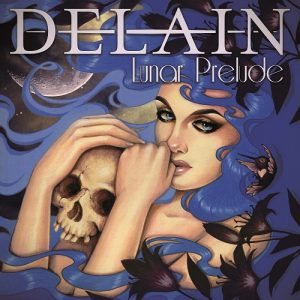 Released on February 19, 2016 via Napalm Records

Dutch symphonic metal band Delain’s last album, the well-received The Human Contradiction, was in some ways a consolidation of everything that the band had achieved over their previous three studio albums. Benefiting hugely from the band’s extensive touring, the album felt effortless in a way that their previous records hadn’t. Their début, 2006’s Lucidity, was less the product of a band than it was the sound of a studio-bound project – which in effect it was, the disparate feel emphasised by the use of a number of guest vocalists. The follow-up, 2009’s April Rain, felt much more cohesive, largely because Charlotte Wessels was the only featured vocalist this time around; but even this second album felt tentative, exploratory. It was only with their third album, 2012’s We Are The Others, that Delain finally seemed to find their voice – and even then, the record felt slightly schizophrenic, as if the tougher, grittier sound favoured by the live incarnation of the band was warring with the sleeker, polished version that was based in the studio. 2014’s The Human Contradiction finally blended the two distinct personalities of the band pretty much seamlessly, to tremendous effect.

Whilst the band are busily working on the follow-up, also due for release this year, they’ve elected to release this eight-track EP as both a taste of things to come and something for existing fans to enjoy whilst they wait. Comprising two new songs, a new version of an old band favourite and a number of live tracks, Lunar Prelude also works surprisingly well as a restatement of intent and as a potential introduction to the band for new listeners. Sonically and stylistically the new songs pick up right where The Human Contradiction left off: the band’s chunkier, ballsier live sound, which Delain had finally succeeded in reproducing in the studio on the last album, remains present and correct, whilst the more symphonic elements are retained, albeit somewhat tempered in favour of a more angular electronic vibe, which is especially noticeable on the re-tooled ‘Don’t Let Me Go’ (originally available only on the deluxe edition of The Human Contradiction). The new incarnation of this latter track sounds markedly more assured than its predecessor, and possesses a somewhat darker vibe; a pleasing urgency akin to a snake coiled to strike. The two new songs are undoubtedly in familiar Delain territory; ‘Suckerpunch’ feels like an old friend from its spiralling riff to its symphonic underpinnings, and its lyric of empowerment – this time in the face of your own personal demons – is also familiar in its approach. ‘Turn The Lights Out’ too is very typical of the band’s sound, its sprightly chorus belied by a lyric that appears to be sung from the perspective of the grim reaper. “I was here / When you first ever drew a breath in / I’ll be there / For the last living thing”. Both tracks are instantly memorable; like the band that gave birth to them – Delain was formed by ex-Within Temptation man Martjin Westerholt – Delain undeniably have the knack of writing songs that successfully marry the immediacy of pop with a tough, powerful sound that satisfies fans from across the musical divide. Like Within Temptation and their ilk, Delain are, in the truest sense, a crossover band.

The live tracks are, perhaps by their very nature, less essential – perhaps all the more so because they are all drawn from The Human Contradiction; it might have been more interesting if some older tracks had been re-visited by the now tour-hardened band. That said, these recordings clearly evidence what a remarkable live unit the band has become – the recent addition of second guitarist Merel Bechtold (of MaYan, The Gentle Storm and numerous others) has proved to be a masterstroke – but they stray, perhaps unsurprisingly, little from the template of the studio editions of the songs. ‘Lullaby’ and ‘Army Of Dolls’ are perhaps the least remarkable of the live tracks here for just that reason. ‘Stardust’ demonstrates the power and range of Charlotte’s vocals quite strikingly, as well as showing the band’s ability to lock into a chunky, loping riff. The live tracks are pleasingly live-sounding, and haven’t had the vibe of the gig crushed in the studio – the audience are quite high in the mix, so the results are not antiseptic as some live recordings tend to be. The enthusiasm of the audience – clapping along for all they’re worth – is evident throughout and is further testament to just how far Delain have come as a live act in recent years. Possibly the most powerful of all the live tracks, though, is the treatment of ‘Here Come The Vultures’, which crashes straight in with its introductory riff without Charlotte’s studio-bound introductory vocal, and the general effect is lean and extremely powerful. There’s no question that their recent plethora of support slots with the likes of Nightwish have given the band an increased confidence on-stage that is clearly serving them well.

The EP closes with a brief instrumental orchestral reprise of the refrain from the opening ‘Suckerpunch’, a gambit that succeeds in making you want to spin Lunar Prelude again (as well as making for an excellent intro tape to run before gigs, no doubt). The EP may essentially be a pick’n’mix grab-bag of offcuts and recent favourites, but it is effective in whetting the appetite for the band’s upcoming record and reminding listeners just how potent their recent work has been. Delain’s star is very much in the ascendance of late, and Lunar Prelude demonstrates just how far they’ve come since their début. It’s probably of most interest to established fans or to curious newcomers, but even the most jaded symphonic metal fan should find something of interest here. If the new album can capitalise further on Delain’s increasing confidence, their forthcoming album may just be the bold step forward they need to truly stand out in a sub-genre that is more over-populated and subject to cliché than ever.