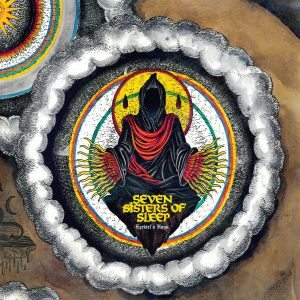 Released on February 19, 2016 via Relapse Records

Seven Sisters of Sleep are a five piece band from California. This record is their third long player. I have followed this band for a little while now and I am a big fan of their debut album and both EPs that followed it. It was their last album (2013’s Opium Morals on A389 Recordings) that made me sit up and properly take notice of what a force they have become in today’s heavy music climate. Opium Morals was cohesive, it was punishing, it was an absolute assault from start to finish. Short sharp shocks of blackened hardcore that gave nods to the likes of Integrity and All Pigs Must Die in equal measure. A set of songs so strong that they have since joined the impeccable roster that Relapse Records now boasts, this being their debut for the label.

Ezekiel’s Hags picks up where Opium Morals left off on opener ‘Jones’, two minutes of bludgeoning hardcore/grind. Tim McAlary’s voice is stronger here than on the last record, more controlled. The best he has sounded to date. The next three songs on the record (‘Denounce’, ‘Gutter’ and ‘Plateau’) slow things down somewhat, adding depth, density and texture. Huge sludge riffs, waves of tone and hammered drums that absolutely floor me.

Next up is ‘Brother’s River’. This song could have been taken right out of the last record, which is in no way a bad thing. ‘Brother’s River’ is the sound of a band knowing what their strengths are and where their power lies. It is a powerhouse and has one of my favourite riffs on the entire album. Next song ‘Prey’ starts with a squeal of feedback and is lead by another mammoth riff, which picks up the pace halfway through and morphs into another sludgey metallic hardcore assault. The opening five tracks are by far my favourite part of the record.

The next two songs, not so much. While taking nothing away from Seven Sisters of Sleep, ‘Third Season’ and ‘Sacred Prostitute’ are the weak links of Ezekiel’s Hags. They don’t have the same power or force as the songs that precede them. They both show a more melodic side to Seven Sisters of Sleep’s arsenal, but in my opinion they seem a little out of place here. However, ‘Ud-Nun’ gets us back on track. The riff is straight up Sabbath worship brought kicking, screaming and blasted into the modern age with glorious results. The first half of the song is punishing doom with howled vocals and driven drums. After a short drum break it is turned so seamlessly on its head and smashed into the ground at force.

The penultimate song on Ezekiel’s Hags is ‘War Master’. This song lurches to life with another huge riff that again plays on the strengths of the band, especially guitarists Brock Elmore and Eddie Bermudez. On ‘War Master’ the pair go into epic territory one playing a massive fuzzed out drone riff, the other playing a melodic passage over the top. This song absolutely nails the heavy to melodic ratio that wasn’t quite reached on ‘Third Season’ and ‘Sacred Prostitute’. Brilliant.

The song that closes the album is ‘Bastard Son’, which is 10 minutes of sheer rage. It is a song that sums up both the record and where the band are at creatively in 2016. The first 6 minutes of ‘Bastard Son’ are bludgeoning doom that reminds me of Thou and Primitive Man at the peak of their powers, you know what records I mean! The last 4, the outro if you will, is intense blackened hardcore more akin to Hexis and Young and in the way before they became Watain. Shrieked vocals over a trem picked riff and drums that feel like you are being shot in the chest at close range (I would imagine).