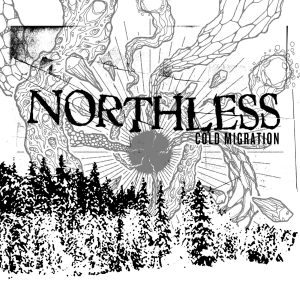 There is something oddly fitting about cleaning the toilet while Northless blasts from the living room. The Milwaukee sludge merchants have long trafficked in human filth, so in my feverish mind, the act of attacking rust stains with a pumice stone seemed laden with meaning.

Not only does Cold Migration mirror the depravity of the human experience, but it somehow seems to expose the desperation and futility of modern existence. This may sound like an unlikely revelation to experience while immersed in household chores, but it’s not the first time Northless has almost brought me to tears.

Their career has always had an element of shape-shifting: from sparse doom to almost claustrophobically technical sludge. This time out they appear to be treading on an almost post-metal path. Unlike recent releases (including the concurrent split with Primitive Man) the tempos have slowed allowing the songs to breathe in evil and confounding ways.

For the two longer songs here, singer Erik Stenglein utilizes a bit of uncharacteristically clean singing that, while initially off-putting, ends up being spookier than his trademark guttural yowl. The atmospheric guitar interplay between Stenglein and Nick Elert borders on post-rock territory at times and drives the desperation home.

So, while I savagely attacked the toilet to the opening howls of ‘The Curse Of Being’, I was curled on the couch whimpering by the time the last echoes of ‘Conduit’ faded away.

RIYL being crushed by a filthy brick.