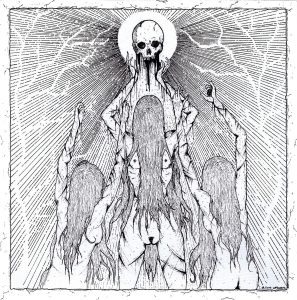 Released on January 14, 2016 via Art As Catharsis Records

It seems strange to think that, following the release of their next album, we’ll all be living in what future historians will undoubtedly call the ‘Post-Swans Era’. But with Michael Gira et al set to depart the scene it’s a good thing that bands such as Lost Salt Blood Purges are continuing to make extraordinary records that seek to alter our perceptions of what music can be. Like recent Swans output this is a double-album, which allows time and space for the music to breathe, and like To Be Kind or The Seer, this is an album to which you must wholly commit yourself without half-heartedness or distraction, as the music here-in demands your all. Don’t expect Swans-like guitar histrionics, there aren’t any of those, expect more a widescreen epic sweep, rather like that of Lift Your Tiny Fists era Godspeed You! Black Emperor, but without any of the overt political polemic.

At over a hundred minutes and across two discs, Only the Youngest Grave is a daunting prospect. Some may complain about the length, but if you’re anything like me you’ll be happy enough to completely lose yourself in it for hours. Don’t be taken in, either, by the sludge metal artwork on the cover, for that isn’t what you’ll find. What you do have is something that would inhabit the intersection of circles in a Venn Diagram that had Godspeed on one side and The Aphex Twin on the other. Michael Snoxall, the man behind the Lost Salt Blood Purges’ mask, has meticulously conjured a world that sits neatly between those two poles, and at the same time has made an artwork that is compelling and unique. Listen to it on speakers, and the sound takes over and fills your room, listen to it on headphones and all the frequencies normally available your ears are totally occupied by a dense, relentless, heavy curtain of sound.

As an exercise in ambient music this record is near flawless, each track appears wisp-like, but never fully arrives, but becomes, as Brian Eno once said of ambient music, a tint in the background. Any attempt to describe what you hear is bound to be difficult, given the shifting sands on which you perilously stand once you press the play button, the whole thing is a mirage: melodies appear but are immediately sucked up into a vortex of white noise, a piano’s keys tinkle in the distance, human voices, distorted, mutter incomprehensible words against a wall of fuzz. It’s rather like being the last human left alive trying to dial through the frequencies on a wireless, hoping against hope to find signs of human life out there, and tricking yourself into thinking that you’ve found them. Only the Youngest Grave is an epic soundtrack in search of a film.

To make this monolithic, primal album easier to digest it’s made up of roughly four sections, interspersed by four chants, the chants themselves bringing some melodic relief to the major slabs of insistent drone in between them. The publicity states that disc one is harsher, more abrasive while disc two is more textured and meandering. This is entirely the case, but for me thinking about the record in four phases helped enormously. The first section (‘Oneiric’ / ‘Abject Lust of God’) puts a rapidly sinking marker in the quicksand, if anything these two first tracks totally encapsulate the experience of Only the Youngest Grave in all its unsettling glory music that drags you in and allows not one moment of purchase to get your bearings. This is followed by ‘First Chant: Waxing, Waning Moon’.

In section two (‘Aura of Silent Moors and their Chambers’ / ‘Stuttering Sinews’) we discover an experiment in atmospheres as a slow build up of radio noise suddenly drops away to leave you floating in free space where the noise of your own breathing is eventually joined by the ghost of an ethereal guitar solo – this doesn’t last long before being filled with one of the most icy, cold, detached saxophone solos, which resolves itself into mournful endlessly repeated notes against a low-key repetitive piano.

Following ‘Second Chant: Blood In the Shells’, section three (‘Bodies Falling’ / ‘Lanthanesthai’ (which ends disc one) / ‘The Spirit Meets the Skin’) begins in melodic fashion, the piano once more taking the lead, fighting to avoid the indistinct, industrial drone black-hole that fills the space around it and threatens to (and finally manages to) swallow it up. The aural space isn’t left empty for long before hypnotic swelling noise and percussion take its place. Not for the first time on this record am I reminded of Hungarian composer György Ligetti who similarly composed epic slabs of discordant music in the 1960s (the proto-drone composer if you like), certainly Lost Salt Blood Purges are the spiritual children of Ligetti (If you’re unfamiliar with his work, check out the hyperspace section of 2001: A Space Odyssey, ‘Lanthanesthai’ shares exactly the same DNA and would work as an alternative soundtrack to that sequence if you’re so inclined). By contrast the percussion laden ‘The Spirit Meets the Skin’ is primal, native – primeval even, conjuring a lost world of smoke and tribal magics.

Following the ‘Final Chant: Stygian Cessation’, and clocking in at over half-an-hour an epic trio finishes the album (‘Noose In the Afterglow’ / ‘Dense Swells In Cold Earth Devour’ / ‘Blood Communion to the Port Saint’). Starting off building layers of electronic sound – in a way worthy of Tangerine Dream – before being absorbed into the slow, barely audible, paper thin noiselessness of ‘Dense Swells In Cold Earth Devour’. It’s a bold and brave move, to have something so quiet on a record, but stick with it and you are rewarded with the beautiful piano composition that finishes the album, and as it plays out you feel as if the whole experience was dream-like and imagined.

This is such a powerful work and I particularly enjoyed the constant tension in the music between the cold application of electronic treatments and the organic, natural quality of piano and percussion. Snoxall and his collaborators tap into both our primal natures and our genius for technology throughout this recording, almost acting as archivists of the world they see around them. Something about this album put me in mind of the great Library of Congress project of the early Twentieth-Century where field researchers were dispatched across the United States of America to record the sounds of people and places for posterity. Here Lost Salt Blood Purges are similarly shipped off to record – in this case – the sounds of the abyss, the dystopian fractures of humanity, and return with something that manages to be both familiar and indescribable, both comforting and terribly unsettling.

I think in anyone’s eyes this album is a triumph, setting the agenda of what music can be and the emotions it can stimulate. Do yourself a favour switch off your mobile, take the phone off the hook and give yourself over to it.

I truly hope it gets the recognition it so clearly deserves. Magnificent.