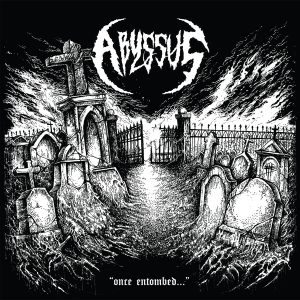 Once more here at Echoes and Dust, we’re featuring a première for old school death metal fans who want to hear it here first. This time, we have Abyssus‘ Once Entombed…, care of the newly founded Transcending Obscurity sub-label, Transcending Obscurity Classics. This band is heavy on an Obituary influence, especially the vocals. Once Entombed… is a collection of EPs released by Abyssus, and although the Obituary influence is strong, that’s not all there is to their approach. In Once Entombed…, they show a very strong punk rock influence while up-tempo. The slower sections and shred sections do feature an early Obituary style a whole lot, and those who’ve followed Obituary through the years know how much punk played a great deal towards Obituary’s early sound anyway.

While the drumming takes a back seat here due to the production values, whereas the drums on Obituary records usually rock solid at a good volume, Once Entombed… is enjoyable to fans of early Obituary and bands like The Rotted. Mid-way through Once Entombed…, the tempos tend to feature slower Obituary much more than at the start of the record, and many will like this welcome trait. This is particularly noticeable by track six, ‘Remnants of War’.

Track seven, ‘Outbreak of Evil’, a Sodom cover, features more punk-influenced thrash at a faster tempo. Expect thrash drumming at the fastest tempos on the record. Don’t expect blastbeats on here. FYI. This is not bad at all.

Track nine, ‘Remnants of War’, actually appears twice here, with track six being the first version. The track nine version trumps it however, and expect headbang a-go-go when track nine lays your speakers to waste. Track ten, ‘Left to Suffer’, sounds like the vocals left nothing at the studio, and the band send some slam your way via the track. Enjoy a good moshpit wherever this plays at. Track eleven, ‘Unleash the Storm’ offers a change of pace. The band slows down at the start, then builds up to a bashfest with an uptempo section, before the band slows down again.

There are five covers on here, and Abyssus rendition of Asphyx’s ‘Deathhammer’ has got to be the jugular. Expect track twelve to be intense, passionately-played and skillfully-executed.

While the Obituary influence does fade somewhat on the latter tracks, they don’t stray far from the formula. By the time they play last track, ‘Postmortem’, a Slayer cover this time, they knock the song out of the park and give you a strong impression on the record. ‘Postmortem’ has been done so many times, but Abyssus help freshen appetite for the song, making it one of the most intense, energetic songs on the record. It doesn’t help that the drums are more audible on this and other latter tracks.

Track fifteen is another version of ‘Left to Suffer’, so that’s twice the fun around the moshpit area. Play with caution.

The most surprising track here is track eighteen, ‘Sacred Serenity’, which is a Death cover. Death rules and so does this cover. The covers just rule on this record. No only originals are real here, fuckers. Keep an open mind and get slammed by Abyssus doing a hell of a job refreshing your taste for some classic metal.

Check out our exclusive stream of the opening track ‘Phobos’ below.