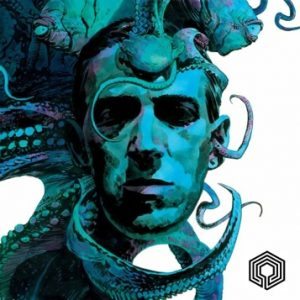 The bass line cuts through and pumps… making me want to walk away, fast, even before the story kicks in. Knowing the content I can see why they took the music in this direction. When the voice speaks, the bass drops back, but only tentatively, briefly… letting the first line get into your ears, before the undertow of the music catches and drags the line of the timeless tale back under, sinking the voice of British horror actor Laurence R Harvey and the worlds of H.P. Lovecraft amidst the pump and swoosh and surf.

The introduction is soft and acts as an overture, settling the mind to listen. As the story gets darker the narrative structure of the music reflects the structure of the prose (and to a certain extent quite evocative of the pen and ink pictures of early illustrated editions). The beat turns dark dance, and quite industrial, supporting the narrator in their evocation of fears and nightmares, and lyrically matching harmony to words. The dread drop chord progressions at a timbre to affect my heartbeat, trips to lull me into meditative listening, to this synaesthete quite inductive of the hypnotism that these tales feature as a plot point. The latter stories use a walking bass line to great effect, causing journey and passage of time in a tale that takes mere minutes to tell.

Whilst unashamedly electronic in construction and instrumentation, this album is very much in the progressive style of Jeff Wayne’s War of the Worlds and avoids the use of sound effects and non-instrument sounds that have dogged earlier attempts from other artists. This is a fantastic collection that works to beautifully illustrate the words of the classic Lovecraft tales; and is a delight to recommend.