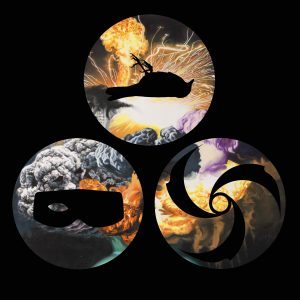 On the face of it, a musical collaboration between Mike Patton, Tunde Adebimpe and Adam ‘Doseone’ Drucker, three very respected artists with the alternative music scene, is the sort of thing that gets people like us very excited (you’re reading a review on Echoes and Dust, so let’s not pretend you’re not a tiny bit of a musical elitist). It’s the type of act you expect to headline boutique festivals, have acres of coverage in the underground press, but receive very little widespread commercial exposure and then quietly fade away as other musical priorities re-emerge. Frequently team ups of this nature are knocked together hastily between the day jobs, a chance to let of steam, goof around and swap instruments. The results then get hyped to the hills by the record label and everyone ends up a bit disappointed and embarrassed with themselves for getting so carried away.

Now, when I read the lengthy and hyperbolic biog accompanying this release my heart began to sink. I probably shouldn’t have been surprised that the PR people were touting this as being a cross between Avengers Assemble and a triumph of musical genius, but it didn’t exactly pre-dispose me to the album. And on first listens I was distinctly unimpressed, not because I thought it was the expected hotchpotch of ideas by artists at a loose end, dicking about in the studio until the tour bus pulls up, but because it sounded, well, too polished!

I was expecting the respective sounds and influences of each artist to clash and create spiky new forms, with the latent experimental bent of each one being encouraged to come to the fore in possibly uncomfortable and shocking ways. Instead what has happened is a sort of rubbing together of styles, which has smoothed down any superfluous edges, melding everything into a gleaming, perfect beast. This lead me to initially hear the album as quite bland, but on repeated listens, I’m glad to report that what Nevermen have actually produced is something of exceptional quality, which manages to take all the ghostly, industrial soul, metal, experimental hip hop and combined pop nous of the trio and fashion it into a seamless whole, certainly worthy of, if not greater than its parts.

The other stylistic surprise is that the sound of Adebimpi’s TV On The Radio is the dominant touchstone. The songs on Nevermen are glossy, dense, bass heavy, and at times the multiple voices swell to a devotional pitch. You could hear large parts of this record and be easily persuaded it was a new album from TV On The radio. The other influences frequently seem partially buried , although there are notable exceptions – the Underworld-meets-metal charge of ‘Wrong Animal Right Trap’ and the spooky dub hop intro of ‘At Your Service’, which becomes slinkier, but more vicious, crashing and bleeping like some sort of faulty production line.

The pop nous I spoke of comes to the fore on ‘Mr Mistake’, which chiefly reminds me of the eccentric electro pop Gorillaz produced on Plastic Beach. In fact, I can imagine lots of these tracks being played on the radio and grabbing you with their flash and style, however, as commercial a proposition as this may all sound, with famous talents and clever musical mutations, the album falls short of greatness for exactly the same reasons. The main problem with many of the songs is there is just too much going on. The constant clamour of voices, with Adebimpi, Drucker and Patton trading lines in numerous vocal styles means that the song lyrics remain frustratingly hard to decipher. As we know Patton on his own can sound like four different people on any one song, so add that to two more singers, trying to bouncing off of him and keep up with his repertoire, and you get a confusing hubbub, which essentially reduces the impact of the lyrics. Some of these songs seem to be reflections on fame (including the otherwise banging ‘Non Babylon’) and as such would probably leave me cold anyway, as I find that sort of navel gazing pretty alienating, but other songs are no doubt dealing in interesting topics, there meanings are often tantalisingly just out of reach.

One track that succeeds on all fronts is ‘Tough Towns’ – over melancholy synths and slower beats our three artists rein in the multi-vocal attack and produce something poignant and powerful as they mourn the death of America’s industrial heartlands. The following ‘Hate On’ has minimal lyrics and as such is also a stand out as a gothic trip hop backing reminiscent of Portishead’s last album pulses under an otherworldly, devotional choir, producing a sort of sleazy listening vibe not unlike some of Faith No More’s mellower moments, and then chattering samples and thick fuzzy riffs build it up, briefly, before it disappears too soon.

There is then, lots to admire here, as you would hope and expect from the protagonists, but I’m not getting over excited and foisting greatness upon it. It is a very interesting, incident packed album, which reflects the styles of all parties concerned and does nothing to diminish their stellar reputations. Perhaps though they were all too pumped up by their own talents and vast potential and got just a bit too excited. If its profundity was as obvious as its musical excellence, we would be talking about a future classic.