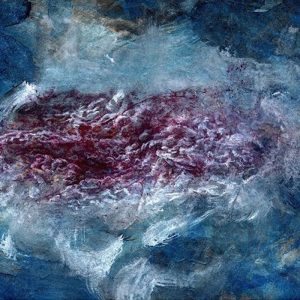 When I first heard news about this record I knew I could hardly contain my shit, two of the best DIY bands that the UK has produced in a long, LONG time joining forces, I knew I would have to brace myself. I have heard and indeed own material from both bands’ back catalogues and without hearing it I could tell it would be something that I would love, biased I hear you say? Fuck you, this is incredible. The thing that intrigues me the most about this split is that it is not ANOTHER hardcore /punk split or ANOTHER doom split or ANOTHER…well, you get the picture. Ok, so the point you are reading this? The songs herein.

Moloch’s contribution to the record is two songs which clock in at just over 14 minutes in total, from the opening feedback squeal of ‘Disability’ to the thundering outro of ‘Holding the Hand of Someone Dying’ , their side is absolutely unrelenting, the vocals are spat with such venom and ferocity that they are unsettling to listen to in places, and before you ask, no that is NOT a bad thing and yes that IS the point! The guitars are steeped in the kind of tone that makes me want to sell all my gear and throw in the towel, the rhythm section holds everything together with minimal effort, keeping everything rolling as it should, thick, sludgy bass tone and the kind of drums that were last heard leading men off to war. Heavy.

Lich’s side of the record, 8 songs in under 10 minutes, was recorded by Jason Frye (drummer in Harrowed) at his Son of Sun studios in Kent and straight off the bat is a punishing kick right in the teeth, an absolutely devastating barrage of sludge metal that makes me want to dig up my dead gran just to punch her in the face and bury her again. Sorry gran. There is so much groove and structure in this set of songs, given that Lich do so much in such a short space of time, their longest track here is opener ‘Beggars Teeth’ clocking in at 2:20. Lich are such a multifaceted band, taking these songs from blistering punk which teeters on the verge of black metal to visceral sludge to negative moshy hardcore that makes me want to punch my deceased elderly relatives, often all within the one song in AND in under a minute, absolutely seamless. The only thing that annoys me about these Lich songs is the fact that they serve as a reminder that the band are no longer operating and will no longer release music. Rest In Peace Lich.

This split is absolutely essential. Do yourself a favour, support Dry Cough, Vetala or Vendetta records and pick up a copy. Bang over imminent.