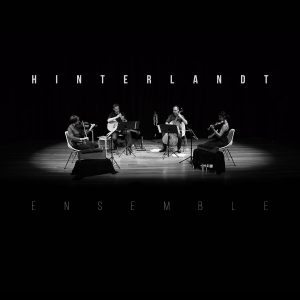 Released on January 19, 2016 via Art As Catharsis
Art, if it exists for any good reason at all, should be all about disrupting those things with which we find it comfortable to live. It should make us look at the world differently, with new eyes, or at the very least, start to chip away at those long held canards that we think of as ‘the norm’, or ‘what we like’. Many of you reading this review, and visiting this website will know that, and have a great appreciation of that way of thinking. We don’t deal here in the mainstream at Echoes and Dust – not that much.

Art as Catharsis is a label which must think along similar lines, just look at the diversity of bands that they have on their roster and think of some of the extraordinarily good records that they’ve released lately. Having done so, you’ll possibly be of the opinion that a quartet of musicians turning out contemporary classical music pieces, worthy of any chamber orchestra, has a natural home on this remarkable Australian label. I certainly think so.

I didn’t start seriously listening to classical music until I was in my late 30s. It’s a bit of a cliche but a truism for most of us, that we don’t really ‘get it’ until later in life. Which is stupid really, classical music is all around us from the moment we first draw breath, and I greatly admire anyone who tunes into it earlier in their lives as there are a lifetime of riches in store. Me? I’m playing catch-up. As I am with jazz, but I’ve had ten more years of that. I think I need at least three lifetimes to catch up with all the music I want to listen to.

So what I’m trying to say is, don’t leave it too late discover this ensemble who play contemporary classical compositions, which are highly influenced by Free Jazz improvisations, and which have a tinge of post-rock aural fireworks. Originally a solo vehicle for Jochen Gutsch, Hinterlandt now comprise four multi-talented musicians who clearly draw from any number of influences that transcend genres. While they do share a musical DNA with John Zorn or The Kronos Quartet, they immediately put me in mind of the (ex Cardiacs) Craig and Sharron Fortnam’s North Sea Radio Orchestra (NSRO) – another band that you should check out, if you haven’t already done so.

Ensemble is three tracks long – ‘Umgangswelt’, ‘Patches and Paths’, and ‘Alltagswelt’, but you’re not short-changed as the tracks all clock in at around the 20-minute mark. German born Gutcsh brings a pastoral European sensibility to the tracks here, but there’s also a hint of a native Australian influence throughout with the clever use of minimal, repetitive, percussion themes that punctuate the strings, recalling, as they do, something of an aboriginal flavour to the music. Umgangswelt and Alltagswelt mean, respectively, the ‘day-to-day world’ and ‘the everyday world’, indeed, the music feels as if it is a reflection of the world around us, the everyday sounds and musical shapes that soundtrack the background of our day. Sound-worlds are the main driver, it appears for Gutsch, but it’s very effective here drawing on European, contemporary Australian, and native Australian traditions.

It starts off at a fairly slow pace but soon blossoms into life with great verve and musicality, don’t be fooled though, into thinking that Ensemble is merely background music, listen carefully and you’ll hear, alongside the strings and percussion, distorted electric guitar. Wait? distorted electric guitar? Well, it is a stringed instrument and rightfully has it’s place on this record.  It’s not done for stunt value either but is allowed to subtly blend with the rest of the instruments.

For my money, Hinterlandt have produced a really original record in Ensemble, which is really worth an hour of your time if you’re looking for a break from the self-imposed silo of your usual listening.