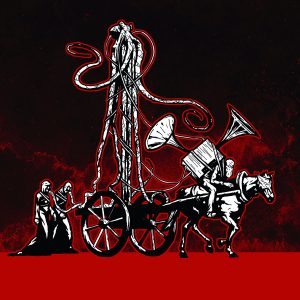 By: Michael B. Hayden

Throughout its existence Crippled Black Phoenix has straddled the lines between prog, post-rock, classic rock, indie and folk along with a fairly wide variety of others. They’ve managed to blend these styles in a way that makes them sound paradoxically modern and vintage at the same time. As they’ve progressed the Pink Floyd influence has become more and more pronounced and their latest EP New Dark Age brings it even more to the forefront with not one but two excellent Floyd covers. While the 70’s influences creep further and further to the forefront in their music they never fall into the trap of becoming a generic throwback band.

The original songs on the album show a slightly heavier CBP than much of their previous output. Much like everything they do though the heaviness doesn’t come across as contrived or forced. Opening song ‘Spider Island’ lurches and lumbers along ponderously, held together only by the vocal melody and sparse guitar leads. It’s not a particularly dynamic song, especially by CBP standards, but at just over five minutes in length serves well as an album opener.

The title track ‘New Dark Age’ exemplifies all of the best of CBP’s output to date. Layers of keyboards and guitars swell over the course of its fourteen minutes and the final crescendo and climax are both beautiful and massive. It’s a sprawling and multifarious composition full of interweaving melodies and heaviness that comes more from texture than outright riffery. Interestingly it’s not dissimilar in arrangement to the first of the two Pink Floyd covers ‘Echoes’.

Despite the quality of the original compositions on New Dark Age the focal point of the EP will most certainly be the extended cover of ‘Echoes’. Covering a song as well regarded as ‘Echoes‘ is always a risky proposition as many people would consider it one of Pink Floyd’s greatest pieces. CBP manages to capture the feel of the original and add enough of their own character to make it interesting. Notably the guitar solos are loose and expressive interpretations of Gilmour’s rather than a sterile note by note recitation. Arrangement wise CBP takes a few liberties with extending parts such as the funky breakdown portion and in the second half of the song there’s an entire section of song that appears to be a few minutes of original composition embedded within the final build up. The vocal harmonies are fantastic and spot on and the samples of actual Floyd members in conversation give the whole song a sense of light hearted reverence. Overall ‘Echoes’ is a huge success for CBP.

Also included as a sort of hidden track is another Floyd song. ‘Childhood’s End’ from Obscured By Clouds isn’t one of Floyd’s most popular songs and the faithful, if heavier, rendition given here is really solid even though it isn’t as ambitious as ‘Echoes’.

New Dark Age feels like it may be functioning as both a place holder between full length albums and a statement of future musical intentions, especially with the title track. With two solid original compositions and the Floyd tribute that they’ve been building towards satisfyingly delivered it seems like Crippled Black Phoenix is at a transition point and if their track record is any indication wherever they go next it will be first rate.