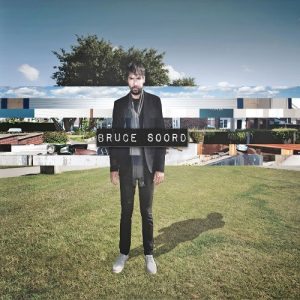 Bruce Soord is best known as the frontman and chief writer of progressive rockers The Pineapple Thief. Prior to, and during, his time with The Pineapple Thief, Soord has worked under a number of monikers both on his own and in collaboration with others – indeed the first few albums by The Pineapple Thief were essentially Soord solo albums in all but name. Bruce Soord marks the first time that he has released a record under his own name. In name, then, if not in fact, this is Soord’s first solo album.

Generally speaking, Bruce Soord has a lot in common with Soord’s work under the aegis of The Pineapple Thief – considering that Soord has essentially written all of The Pineapple Thief’s material himself, this is perhaps not surprising. Much as was the case with Pink Floyd, Soord’s writing tends towards melancholia; he favours generally hopeful stories about people struggling with life’s difficulties. This tendency has ensured that The Pineapple Thief’s albums are filled with paens to solitude, loss and mortality, all coloured with the band’s muscular progressive rock tendencies. Here, away from the band environment, the writing feels familiar for the most part. The chief difference between Bruce Soord and The Pineapple Thief’s catalogue is in how the songs are dressed.

Opener ‘Black Smoke’ is a fine example. A plangent ballad constructed from minimalist piano and Soord’s gracefully constructed harmony vocal, shot through with sparse electronica, it sounds just as you would expect a song by The Pineapple Thief sounding, but without the usual guitar-led arrangements. Whilst Soord generally writes from his own experience within The Pineapple Thief, the lyric here is also more explicitly rooted in Soord’s own life, too, as he wanders through the town where he grew up, now falling into a slow decay; the second track, ‘Buried Here’, picks up the narrative from there and looks back at his formative years. Writing in such a straightforward fashion about his own life and environs lends the material authenticity and an emotional heft that makes the material truly compelling.

Soord’s stewardship of The Pineapple Thief has often been compared to Steven Wilson’s stewardship of Porcupine Tree. Both bands essentially started out as solo projects by the two musicians, only to blossom into fully-fledged bands, albeit bands for which their respective founders wrote all of – or at least the vast majority of – the material. ‘Buried Here’ is the closest Soord comes here to sounding like Wilson; not just in terms of the careful acoustic-led arrangement, but also in vocal style and in the co-opting of a dark theme to tell a melancholy but uplifting tale.

‘The Odds’, on the other hand, is perhaps the closest thing here to The Pineapple Thief. It’s rolling, upbeat choruses and tension-filled verses are a favourite Soord device, and the general impression is of a latter-day Pineapple Thief song played with most of the plugs pulled out of the wall. In some ways, this track is the black sheep of the album for just that reason: it sounds less like the other songs and the way it is reminiscent of The Pineapple Thief’s material at first feels a little jarring. It also feels a little slight placed next to the drama of ‘A Thousand Daggers’, which welds ticking percussion and a woozy trumpet line to a tale of disillusionment and discord to great effect. A forbidding electric guitar line cuts through the spaces in the song like a forbidding fin across the water at high tide, before finally forming an oppressive thundercloud at the song’s conclusion.

Perhaps Soord’s finest achievement here is ‘Willow Tree’, which for the first few minutes of its running time is a shimmeringly beautiful sunlit acoustic ballad with a gorgeous bittersweet lyric, as Soord considers the titular tree, comparing the strength with which it weathers the elements and the passage of time with that of the human spirit. Instantly memorable and beautifully performed, it displays Soord’s winning way with a song, made all the more effective by a mid-song breakdown that utilises a forbidding brass line and clattering snares to build tension before releasing it into a tense brass-led interlude that could have come straight out of the Morricone songbook, which slowly builds into intensity before crashing to a discordant halt to give way for a gentle acoustic coda. It’s one of the records’ finest dramatic flourishes and lingers long in the memory.

The second half of the album is, if anything, even more melancholic. ‘Born In Delusion’ utilises a gently rolling rhythm to deliver its tale of destiny and unfulfilled dreams, as the protagonist’s spirit is slowly smothered by their well-meaning family and the slow dissolution of the town where they live. “It’s a strange kind of love”, muses a fascinated and appalled Soord. The song itself possesses a strange kind of beauty, built chiefly upon a percussion pattern and delicate acoustic guitar. The two-part ‘Field Day’ reduces the musical palette even further, to a whispered monochrome. The sparsest acoustic guitar accompanies Soord’s cautionary tale that draws comparisons between the automatons of the rat race with a hunting party, casting the listener in the role of the fleeing wildlife. “They’ll hunt you down and leave you lifeless / Run like hell”, warns Soord, before a brief, blissful Floydian guitar solo arrives, delivering a delicious and hugely effective catharsis. The second part returns to a simple duet between Soord’s vocals and acoustic guitar. “Don’t be afraid”, soothes Soord, as the song glides to a blissful end.

It’s noticeable throughout the record that there is a new-found confidence in Soord’s vocals. ‘Familiar Patterns’ utilises piano and sparse echoing percussion to underpin one of his finest vocal performances to date. “Is this a dream we share?”, wonders Soord, as the pregnant pauses in the structure of the song are steadily filled with gliding strings and plaintive electric guitar. This is a truly extraordinary track that is remarkably successful in marrying the catharsis and drama so beloved of fans of The Pineapple Thief to Soord’s stripped-back arrangements. A thing of glacial beauty, it comes across as equal parts latter-day Anathema and Floyd at their most reflective; in fact it’s so effective it’s a wonder that Soord didn’t save it for the grand finale.

The final track, ‘Leaves Leave Me’, ends the album on a reflective note. Soord’s narrator watches summer slip away into autumn and the promise of winter, but with the changing of the seasons comes a “clear day” and the promise of hope; and as the song slowly builds, Soord’s lonely vocal unfolds into a widescreen choir singing the listener to a sunlit acceptance of the cold winds of winter. As the song closes, we hear the sounds of passing people and children at play – after all, life goes on.

Bruce Soord is a beautiful album; a beauty borne of an acceptance of entropy: losses and dashed hopes are accepted, whilst Soord celebrates, as ever, the human spirit’s ability to overcome setbacks and face the future with hope. It’s this humanistic optimism that continues to make Soord’s writing so compelling and involving, and on this record he’s channeling it as effectively as ever. His existing fans will find a great deal to enjoy here: it’s familiar in feel, but is a side-step from The Pineapple Thief’s output rather than a slavish continuation or a radically different animal. For those who’ve yet to discover the joys of Soord’s ever-growing discography, in many ways this is the perfect place to start. Deceptively simple, emotionally rich, this album shows Soord at the peak of his powers.