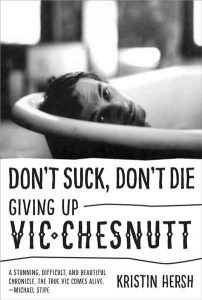 Released on September 30, 2015 via University of Texas Press

My discovery of Vic Chesnutt’s music came on Christmas Day 2009.  Spending iTunes vouchers received that day on various stuff, At The Cut was a blind buy. I’d read plaudits and critical whistlings from various people about Vic’s work yet not a note of it before, and so I took the plunge. I didn’t know until a few days later when I was impressed enough to do a little reading up on him that I also found out that it was on the day that I first listened to his songs that Christmas Day 2009 was the day that Vic died. I’ve struggled to listen to much else of his work because of this, yet At The Cut remains something rather precious to me.

Don’t Suck, Don’t Die is an odd book. Written by Vic’s touring partner and close friend Kristin Hersh (Throwing Muses et al), it’s not so much a biography as a very lucid recollection of a few incidents that passed between the two artists, written entirely as a one-sided conversation from Kristin to Vic. The factual nuts and bolts of Vic’s life are presented by way of an interesting preface courtesy of Amanda Petrusich in order to get the reader up to speed, or perhaps to prepare them for what follows. It’s a hard read, and not just because the way it’s presented makes the reader feel sometimes that they are in some way intruding on something far too personal to be listening into.

The closeness shared between Hersh and Chesnutt is an unconventional one, the goofy conversations between the two are a delight to listen into, and their lighter arguments also. Always in the picture are their respective partners, part of this inextricably close family as support and grounding to the main duo as presented here. The levity of the greater part of the book makes for a wonderfully human read, Vic coming across as someone managing to be ruthlessly pragmatic at times (“every hurt heals with scar tissue”) and delightfully silly at others, with Kristin providing either the foil or butt of much of his behaviour.

When other people become the narrative focus, the tone darkens. An incident backstage where Vic hits someone repeatedly described here as a “waif” to accentuate the onesidedness of the violence is a distasteful shock, and the whole episode is described in such a way that all sympathy for Vic built up by the reader is (at the very least) almost completely and swiftly drained away; and the suddenly-announced divorce of his wife comes as a sad surprise to audience and author alike. It’s the swiftness of these actions and Vic’s nonchalant reactions that jar the consciousness in no small manner, and the way that these are written suggest that this is the exact response that Kristin was aiming to portray in herself just as much as provoking the reader’s own response. At least when the unravelling begins in earnest during the book’s final act, we are warned with a sentence: “This is when you started to hate me, I guess.”

Just as we are used to and comfortable with Kristin’s directed prose, it changes. Four pages covering five months of unanswered emails and phone messages: the warmth we all felt from reminiscence and conversation is cut down by this show of true one-sided dialogue. It’s genuinely upsetting. Also upsetting is much of what follows, as the slow-paced lengthy memories are replaced by scattergun thoughts and actions – this shaded heart of the book does much to represent the “Giving Up…” section of Don’t Suck, Don’t Die as the focus is purely on Kristin’s time apart from Vic and of her piecing together a lot of, well, everything else in order to make sense of a chaotic period where she is the main focus of her own writing.

When the end comes it’s sad of course, but the overarching feeling is one of utter love. It’s entirely possible that not only can Kristin Hersh not give up Vic Chesnutt, but she is perfectly content to have this crotchety, childlike, wonderful dickhead hovering over her life still. Hopefully though, this book will have helped put to rest the parts of their time in each other’s company that have haunted her over the years so that all that remains is this shining memoir.