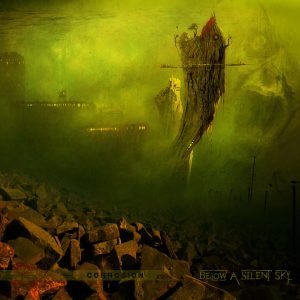 Released on September 24, 2015 via Independent

Post-rock and metal seems to be in clover at the moment. 2015 was a very strong year for the genre, I’m sure that any of the Echoes and Dust writers will attest to how many hours listening, writing, comparing and general wrangling went into choosing the Top 20 albums for the Album of the Year list. As such, we are a hard bunch to please and always searching for something that stands out of the pack.

Corrosion by Below a Silent Sky is something that has been on my playlist for a while. Their first full length album is something that required further listening. The album opens with ‘The Withering’ starts with a quiet guitar intro, the first thing that hits you is the wonderful production and sound stage of this record. It makes a lot of more popular (read – wealthier) bands look a bit amateur. The song meanders along until it breaks into a slow-tempo, doom laden, heavy riff, and the track slowly builds and develops switching both influences and feel. A quiet bass break comes when you might expect a huge crescendo.

‘Sulfur’ is a heavier track, and the track that would be the single, if a band like this did such a thing. Again, the songs varies and changes as it goes. It can feel a little rushed sometimes. I do get the feeling that there is a lot here crammed into one (short) album. Nonetheless, the band work well together on this song. ‘The Flood I Ambiguity’, again, has a quiet start but builds into heavy, fast down-tuned riffs, the urgency and dynamics coming across well. A very short track, almost an interlude. ‘The Flood II Closure’ merges into the previous track (which makes me wonder why not just make one big long track, I feel that would flow better). Bass and drums are excellent on here, exploring some more complex pieces.

‘Adrift’ this time is straight into it, the lead guitar dominating. Listening to this album is almost like watching a band live, takes a bit of time to warm up before they settle into it, start to express themselves. The last track, ‘Asperatus’, is a more jarring, doomy track.

Music of this genre, for me, is often best listened to as a whole album. A lot more patience is required than your average three-chord, three minute indie standard, but this does mean that arrangement and composition are critically important. This is something that’s not right here. There are some great tracks on this record, but it doesn’t seem to work well as a whole. Some of the tracks feel rushed and the mood changes too fast. This may be a symptom of a band brimming with ideas, which may bode well for the future as they develop and mature. That said, Below a Silent Sky are a talented band with some great moments and I will certainly check out future releases.