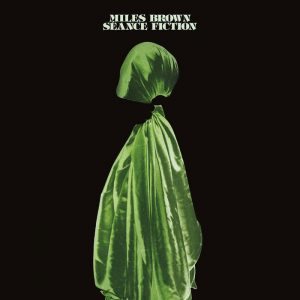 To quote the late, great Douglas Adams: “I love deadlines. I love the whooshing noise they make as they go by.”  A couple of weekends ago saw the final submission date of Echoes and Dust’s Best of 2015 list and, as I was very drunk when I did mine, I can’t wait to read it so I can find out who I voted for.  Not this gem unfortunately, as it arrived a mere 24 hours after we had to get our lists in.  So, say hello to a contender for Echoes and Dust’s Best of 2016…

Australian Miles Brown, better known in certain parishes as head honcho and theremin-wielder for ace gothic sci-fi prog types the Night Terrors, and Séance Fiction sees Miles branching off a bit into different territory.  Synths and theremin abound of course, but instead of constructing big, oppressive soundscapes as he does with his band, here we see a more introspective work based on a period when electronic music came out of the big halls and invaded the clubs.

There is a lot of retro stuff going on among this record’s assembled bleepings, all filtered neatly through Miles Brown’s own processes to end up with something very strange and exciting indeed.  Opening with instrumental Space Cadet, the 8-bit laser noises and arcade cabinet explosions for percussion do more than just introduce the equipment to the listener, they define the attitude of the performer also.  This in an enjoyable romp through a record collection and beyond, using the sounds of the time to express just how much fun it was to take something that was previously the preserve of rich rock types and make something new and dangerous out of it.

There are recognisable touchstones aplenty throughout Séance Fiction from post-punk’s electronic scene – Suicide seems to feature quite heavily across much of the album’s darker side (of which there are plenty), but there’s lighter references also: Thomas Dolby’s style – both musical and lyrical – is writ large across debut single ‘Electrics’ for example; closing instrumental ‘Feeder’ has the mournful tones of Ryuichi Sakamoto at his finest and highlight track ‘Apparition’ punctuates its atmosphere of Foxx-era Ultravox with a frankly stunning chorus that sounds like Japan had nicked Duran Duran’s ‘Save a Prayer’ and ran off with it, albeit in suitably elegant fashion.

Unsurprisingly for such an accomplished musician and composer, musically this is all top-drawer stuff.  Layers are the order of the day from start to finish and the end result is a heady mix of tones and melodies that stop just short of being overwhelming most of the time and the occasional application of panic to the final acts of several tracks pushes that feeling just over the edge to the point where removing the headphones and repairing for a cup of tea and a regathering of the senses seems mere seconds away.

Séance Fiction is music to move about to, whether it’s jumping about like a loon or just moping about forwards and backwards like goths did in the 1990s (and possibly still do, I haven’t checked in a while) but however you react to it, a kinetic reaction is pretty much inevitable.  If this doesn’t feature this time next year on my top however-many-it-was list of 2016, it’ll mean that next year will have been an absolutely staggering year, or I did my list in a drunken panic again.