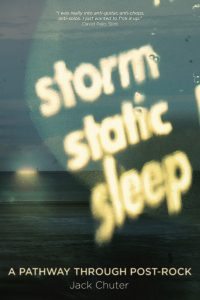 Released on November 30, 2015 via Function Books

Post-rock is a genre ripe for analysis. It’s often complex, multi-faceted and it rarely has any regards for any sort of conventional musical structure, making it perfect for music geeks to listen to, analyse and dissect, no doubt whilst stroking their beards and staring into the middle distance. It’s also paradoxical … despite post-rock’s intricacies, it’s one of the most universal forms of music; the emotional response to post-rock’s most dynamic explosive peaks and most beautiful, delicate troughs can be felt from Tennessee to Timbuktu.

It’s surprising then that there have been no books dedicated to exploring the rich history of the genre, but Storm Static Sleep makes a claim to be the first. It’s certainly a noble attempt to tell the story of post-rock, splitting its contents into 13 chapters headed by some of the key, influential bands of the genre (Mogwai, Sigur Rós, Mono, Explosions in the Sky, Maybeshewill) and bands who paved the way for post-rock to become a tangible, definable movement (Talk Talk, Slint, Bark Psychosis, Labradford, Tortoise). There are also some pleasing detours into relevant topics along the way, such as Constellation Records, ArcTanGent Festival and Simon Reynolds, the English-journalist who first used and proliferated the term ‘post-rock’ (its first use dating back to 1993 with regards to the band Insides in Melody Maker).

Much of the book is dedicated to exploring the origins of post-rock and how a term that used to be applied to describe musicians working without boundaries has transformed into a short-hand descriptor for epic song-lengths, dynamic crescendos and diminuendos and (often but not always) no vocals. The book is authored by Jack Chuter, editor of the music website ATTN: Magazine and long-time contributor to Rock-A-Rolla and Zero Tolerance. Of the genre and his intentions for Storm Static Sleep, he writes “I’ve loved post-rock since my early teens, yet it’s always troubled me that none of the existing accounts of post-rock history make any sense whatsoever. The internet liberally declares Slint and Talk Talk as the originators of the genre, while quietly glossing over the fact that, sonically, these bands couldn’t be further apart. I wanted to write a book that would lay the groundwork for a strong, consistent understanding of the post-rock narrative.”

In this, Chuter broadly succeeds; throughout the book he tries to pinpoint a concrete definition of the term post-rock, and through this, we come to understand its many nuances and intricacies. It’s a tricky exercise considering that the genre is an ever-expanding kaleidoscope of ever-shifting ideas and ideals but it is one that is explored deftly. Chuter’s metaphors are grand and adventurous, vividly painting pictures in your minds-eye. For example, to take a description of a song from one of post-rock’s most notable acts, he describes the instrumentation from Mogwai’s 1997 song R U Still In To It? as guitars and pianos dripping like tears all around Aidan Moffat’s heartbroken spoken verse. Some may tire of this grand-standing approach to the prose, whilst others will no doubt find it beautiful and lyrical but either way, it’s certainly evocative of the genre that Chuter is writing about.

It’s by no means the definitive guide to post-rock; being just shy of 300 pages, there are inevitably pieces of the post-rock puzzle missing, but Storm Static Sleep in no way makes a claim to be definitive. It does however give a greater understanding of exactly what post-rock is and where it has come from, by intelligently exploring the histories of some of the genre’s most significant and important bands. It will almost certainly act as an inspirational spring-board for a future author to write the definitive guide to the genre.