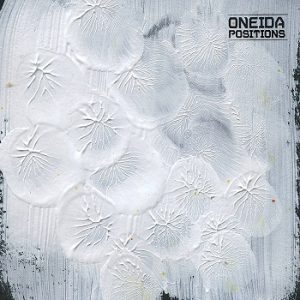 Released on November 27, 2015 via Rocket Recordings

With a work rate that puts many other bands to shame, krautrock psychonauts Oneida have developed a back catalogue which is full to the brim with excellent moments. This is all set to continue now with the release of their mini album Positions which, although only three tracks long, is a perfect antidote this side of Christmas to take you away from it all for a brief while.

Taking in two cover version of songs from This Heat and Chrome you may well feel a little short-changed but don’t let that put you off as in these songs are the essence of what makes this EP so great. Indeed, ‘All Data Lost’ may well be on your list of greatest tracks ever by the time it comes to its fiery end.

Opening with the post-punk squall of ‘SBQR’ whose bedraggled guitar throws you deep into the New York underground and the spirit of the original no wave scene from CBGB’s is resurrected, it’s also a complete red herring as to how the rest of the EP pans out. This is Oneida though, and a few surprises are always to be expected when approaching their music.

Order is restored with the ambient twig out that is ‘Under Whose Sword’, a track driven by a deep bass and coloured by the slight tremor of synths as the track eases its way into your consciousness. It’s creepy and dark and for all it’s strung our glory, never really goes anywhere. It’s more of a darkened drop as the little blue pill takes hold and you are thrust down the rabbit hole to a dystopian underground. Nervy and tetchy, it’s a perfect mid point.

That mid point then turns to a disturbed bleep of electronics as the dissonant start of ‘All Data Lost’ proves yet another red herring before it erupts in glorious technicolour krautrock. It is simply magnificent and can stand tall as one of the great end tracks on a release, such is the power of the piece. Dark, deep and thrusting it haunts the highways of the mind whilst keeping an eye on the motorik dancefloor. It’s as if after the squalid underground, daylight has been breached and a new dawn begins.

As yet another chapter in their tremendous career, Positions may ultimately rest as a footnote given the nature of the release. It thoroughly deserves to have its moment in the sun though as the three tracks are of the highest quality. Rocket Recordings seems like the perfect home for this release and if this is what comes of that partnership then the future really does like like it has some dark fun involved in it. Superb.