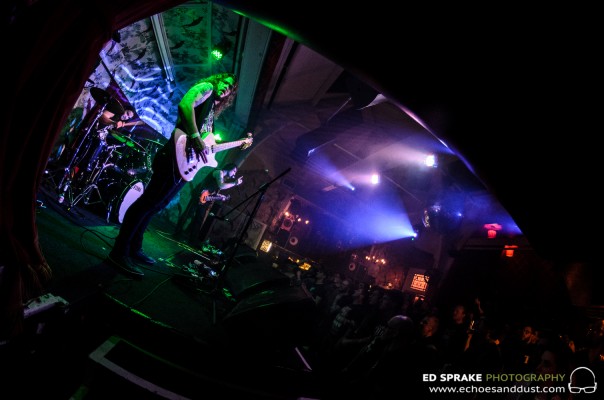 Mutoid Man, on their brief European and UK tour, stopped at the Deaf Institute in Manchester for their second of only two UK dates on the Bleeder Tour. 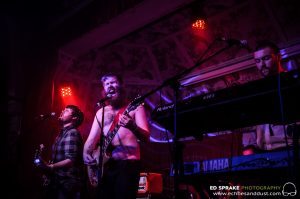 The evening started with local boys Trojan Horse. They opened to a small but appreciative crowd, singer/guitarist Nick Duke evidently a little nervous playing in front of, one of his self-avowed heroes, Brodsky. His Gibson sporting a Cave-In sticker, which was not-intentional (apparently that would make him look like a massive dick!). Trojan Horses’ on stage banter maybe not one of their strong points (their words, not mine) [I’d disagree. They are hilarious, sometimes on purpose. – Ed.] but despite that they have been favourite on the Mancunian scene for a while and have developed their live show of late, sounding a lot more edgy live than they are on record; a frenetic, random mix of prog-infused rock and weirdness. Best demonstrated on the last track ‘Hypocrites Hymn’, which descends into a cacophony of noise and feedback. It was also good to see members of the other two bands checking out these guys. Good show to kick off the night.

On stage next was Palm Reader, a hardcore outfit from Guilford. The five piece band took to the tiny stage with barely and inch to spare. I (wrongly) thought there wouldn’t be much space for stage dynamics. The band burst into their first track. Singer McKeown bristling with energy. The stage barely containing the mass of hair and instruments. The band of earn a lot of comparisons with Dillinger Escape Plan, with good reason. McKeown’s vocals though have a distinctive estuary English tinge. The band delivered half and hour of brutal, punishing, hard, fast tunes. Tracks from the recent release, Besides the Ones we Love show a little more maturity than the first album with no loss of intensity. The set seemed a little repetitive at times, the small venue containing some of the dynamics the band has on record. Palm Reader however are not your run of the mill standard hardcore band, under the ferocious facade is some real musical complexity and creativity.

One of the great things about the Deaf Institute is how close you get to bands, in fact, any closer and you would be tripping over cables. This is a bonus with bands such as Mutoid Man who really interact with the fans. A very casual entrance, more akin to a small band in a pub than a band whose members count Converge and Cave In on their CVs. The band come across as good friends who dearly love what they are doing and have a great sense of humour. They soon opened the set with ‘Bridgeburner’, an awesome opening track that immediately had the crowd take notice. The band were tight and fluid, Brodsky’s riffs combining with Cageo and Koller (bass and drums, respectively) very well. The band then went straight into ‘Reptilian Soul’ closely followed by ‘Sweet Ivy’ and ‘10,000 Mile Stare’. The first four tracks of the show being the first four tracks from the 2015 release, Bleeder. The band are unusual in the fact that they can swap instruments, the bass player can leave the stage and generally mess about a bit but at no point did they ever miss a riff, bass part or a drum beat. 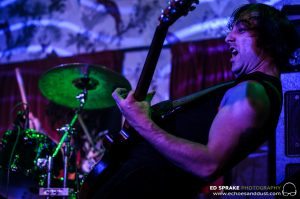 The next track was ‘Friday 13/8’, from the band’s first EP Helium Head. The intro to this track, a complex and urgent, shows that Brodsky’s guitar skills are far more advanced than straight-up power chord based rock of a lot of bands of their ilk. If you hadn’t been there you would swear there are far more than three members, such is the soundstage they create. They followed with ‘Sacrilege’, this time showing off Cageo’s bass ability with a heavy distorted intro. ‘Scrape the Walls’, again from Bleeder, sees cleaner vocals while still a heavy track with a memorable chorus. ‘Lost in the Hive’ another fast and heavy track followed. Brodsky at times amusingly ‘singing’ the intros to the songs. The opening riff for the next track, ‘Beast’, again showing off Brodsky’s skills with the whole band bouncing off each other, tight, heavy and relishing the moment. In a similar vein, they played ‘Dead Dreams’. 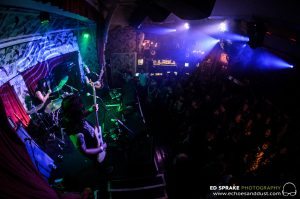 After telling the story that apparently Eric Burdon from The Animals hated this cover, they played ‘Don’t Let Be Misunderstood’. Brodsky’s vocals surprising good for what is something quite different to their normal style. Burdon might not like it but the crowd here did. This was followed by a song, which after some googling turned out to be the boss theme from the Contra video game. Full marks for creativity! To finish the main set, ‘Scavengers’ from Helium Head. After what seemed a very short interlude ‘Gnarcissist’, the amazing opening track also from Helium Head finished the set.

The night saw three different style bands, with Mutoid Man giving a masterclass in how a three piece metal band should be; fast, loud, technically excellent and loving it. Awesome.