The annual Malta Doom Metal Festival has just celebrated its seventh year and the line up goes from strength to strength. This year was my second visit to the festival, and this time my band Iron Void had the privilege of playing the official Warm-up Show the night before the main festival. Our old friends Hooded Priest were also on the bill (alongside local band Krishna and Swedish metallers Cult of The Fox) and it was great to see them back on stage again after an extended break. The audience were incredible, and by the end of the night, I knew things had well and truly kicked off and we were ready to start the main festival.

Maltese doom metal has always been about pure power with passionate vocals and Dawn of Anguish are no exception. They warmed up the crowd with their down-tuned riffs, with none other than Simeon Gatt of Maltese epic doom legends Forsaken on the drums. Theirs was a memorable set of no-nonsense doom metal and a great start to the festival.

King Heavy hail from Chile with their line up completed by Belgian vocalist Luce Vee (Hooded Priest, Witchsmeller Pursuiviant). I have been on tour with these guys for the last couple of weeks, so I may be a little biased. Despite that, I think it’s fair to say that they took full advantage of the festival’s large stage, with singer Luce on top form wearing his trademark hooded stage costume. Their set time seemed a little early, but actually worked in their favour as the crowd were wide awake and still had plenty of energy to cheer them on. 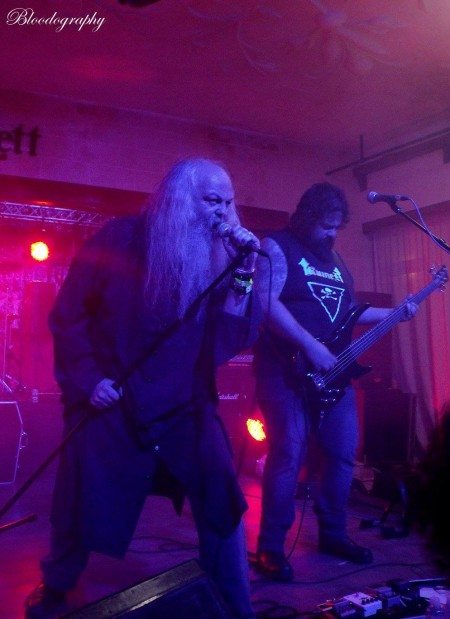 Belgian death doom, named after the Funeral March. The name says it all! They play a more technical, gothic/death based doom than I usually listen to, but their set was as good an example of the genre as any I have heard.

These NWOBHM veterans delivered a powerful set of classic heavy metal reminiscent of Saxon and early Iron Maiden. That’s the great thing about Malta Doom Metal. There is room for heavy metal as well as just slow doom. Tysondog’s set was perfectly timed after three full doom sets and it provided a nice break before headliners Nomad Son took to the stage.

This Maltese supergroup features Albert Bell, Malta Doom Metal Festival organiser and founding member of Forsaken on bass, backed up by the brothers Chris (guitar) and Julian (keyboards) Grech. Nomad Son play epic doom that is also influenced by classic 70’s rock and early heavy metal. This works well with their heavily keyboard-led sound while still keeping the emphasis firmly on doom metal. The band ended the first night of the festival in style, drawing on material from all three of their albums. 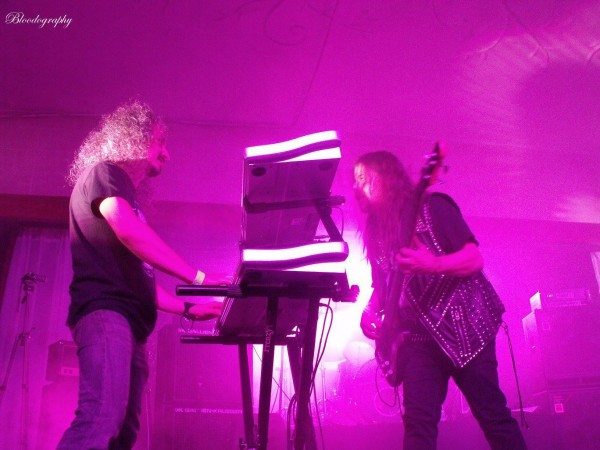 The second day of the festival saw things start a little earlier, and Malta’s 12th Ode were charged with blowing away our collective hangovers. The band had plenty of energy, despite the early afternoon timeslot, and delivered a powerful set of NWOBHM-inspired anthems that appealed to the Iron Maiden fan in me. 12th Ode delivered plenty of epic guitar solos, twin guitar harmonies and  headbanging riffs from their début CD The Awakening, topped off with very impressive clean vocals from front man Daryl Ebejer. Special mention should go to Daryl for his wise decision to sport an Iron Void ‘Doomsday’ t-shirt and also a patch on his denim vest!

This Swedish four-piece play mid-paced epic doom metal reminiscent of Dio-era Sabbath. With the line up completed by Cult of The Fox members Erika (guitar) and Peter (bass), they played a tight, well rehearsed set that set the doomy tone for the rest of the day.

Done badly, epic doom metal can quickly become boring. Stonegriff manage to get the formula just right, balancing songwriting with brutal heaviness. The theatrics of their drummer and the showmanship of their vocalist (who I was told is a big Judas Priest fan) made the set for me. Their were plenty of high-pitched vocals, which did become comical in places, but this just added to what was a very entertaining set.

Essentially a thrash band with some doomy passages thrown in for good measure, Canada’s Cromlech mix technical riffs with melodic vocals to great effect. They were one of the most musically accomplished bands of the festival, and are well worth checking out live if you get the chance. As they are based in Canada, I doubt I would ever have caught them live if they hadn’t been booked for the festival.

Doomed hail from Germany and play slow, funeral doom with death metal vocals. This is not my favourite flavour of doom, it has to be said, but they do the early Anathema/My Dying Bride death doom thing very well. I checked out a couple of songs and then headed out for pizza. If you’re a gothic doom fan, Doomed could well become your favourite band, but for me, they were a chance to get out for a food break.

Brummie occult doomsters Alunah may seem like an odd choice for this most heavy metal of festivals. The band kept to themselves most of the afternoon and didn’t really fit in with the crowd. They had their fair share of fans by the end of their set, though. Soph’s vocals were haunting and benefited from a good overall sound which allowed Dave’s fuzzy Tony Iommi-inspired guitar tone room to breathe without washing out her melodies. Alunah are old friends of mine and I have shared many stages with them over the years. They did well to stand up against so many bands and managed to win over at least half of the crowd, rounding off their set with a sludgy cover of an old song by The Cure.

A curtain was pulled across the stage in the run up to Venom Inc.’s set, and their hardcore fans began the long wait for the show to start. As the minutes ground on, the room began to fill up and it was completely packed by the time Venom Inc. took to the stage. The band is basically Venom minus Cronos with the “Inc.” added for legal reasons. While I have never been the biggest fan of their albums, the band quickly won me over live and made sure they played their classics such as ‘Black Metal’, ‘Warhead’, ‘Countess Bathory’ and ‘Buried Alive’ (remember the Obituary version?) so that even casual listeners like me could nod along from the back. Venom Inc. sounded like a band half their age and kept the energy levels up throughout their impressive set. They might make a fan out of me yet. 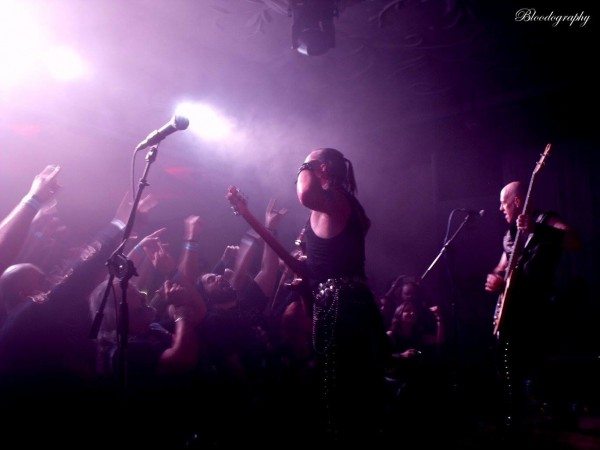 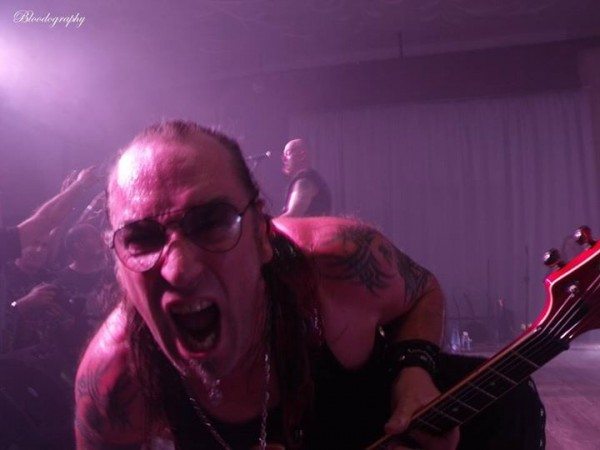 The decision to put two bands on after the headliners seemed strange to me. What if everyone leaves after Venom Inc.? While the crowd for these Greek epic doomsters was a little on the thin side, I’m glad I stuck around for them. Like Stonegriff before them, they have the balance of slow, Solitude Aeturnus doom metal and Sabbbath swing mixed with some of the best clean vocals I have ever heard live. They were great and I’m glad I didn’t spend their set cooling off outside like so many others.

You have to hand it to my fellow Yorkshiremen (and woman) Arkham Witch. They arrived on the same bus as me in the early afternoon knowing they wouldn’t be on stage until after midnight. They must have been tempted to hit the bar, but somehow managed to stay sober and bang out a special set made up of classic The Lamp of Thoth songs. TLOT were vocalist Simon and drummer Emma’s former band. Playing a covers set of your old band may seem a bit weird to you, but then again, Arkham Witch are weird. That’s what makes them so good! The crowd began to fill out again as they blasted through all the TLOT classics. I was singing along for their whole set as each song invoked old memories of gigging with them back at The Snooty Fox in Wakefield years ago. Their new line up is completed by guitarist John (whose tight rhythm guitar perfectly complements lead guitarist Aldo, and adds some much needed wah!) and my Iron Void band mate Jon “Sealey” Seale on bass, initially as a fill-in, but now as a full-time member. Arkham Witch have never sounded heavier, and this special set closed the festival in grand style, giving their European fans a chance to hear some TLOT classics live one last time. 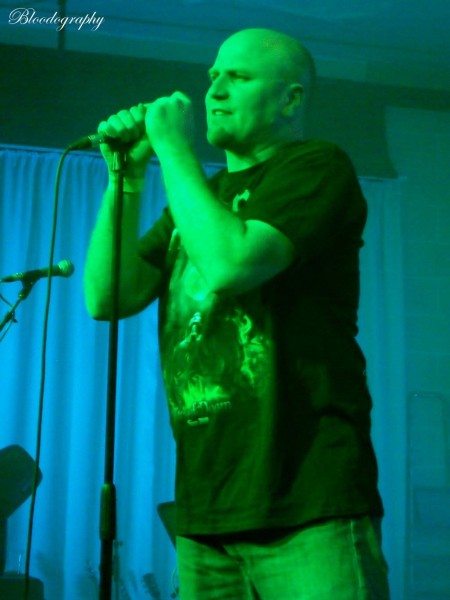 Malta Doom Metal is a special festival for me. It was the first overseas gig I ever played (back in 2012), and the friends I’ve made there will stay with me for the rest of my life. Sunshine, cold beer and a warm welcome await those who make the effort to venture out there every year. I’m not playing the festival next year, but myself and the rest of the Iron Void family will be back to share a few dozen cans of Cisk and Hop Leaf with our adopted Maltese brothers and sisters. If you’re thinking of going in 2016, just do it. I’ll see you there! 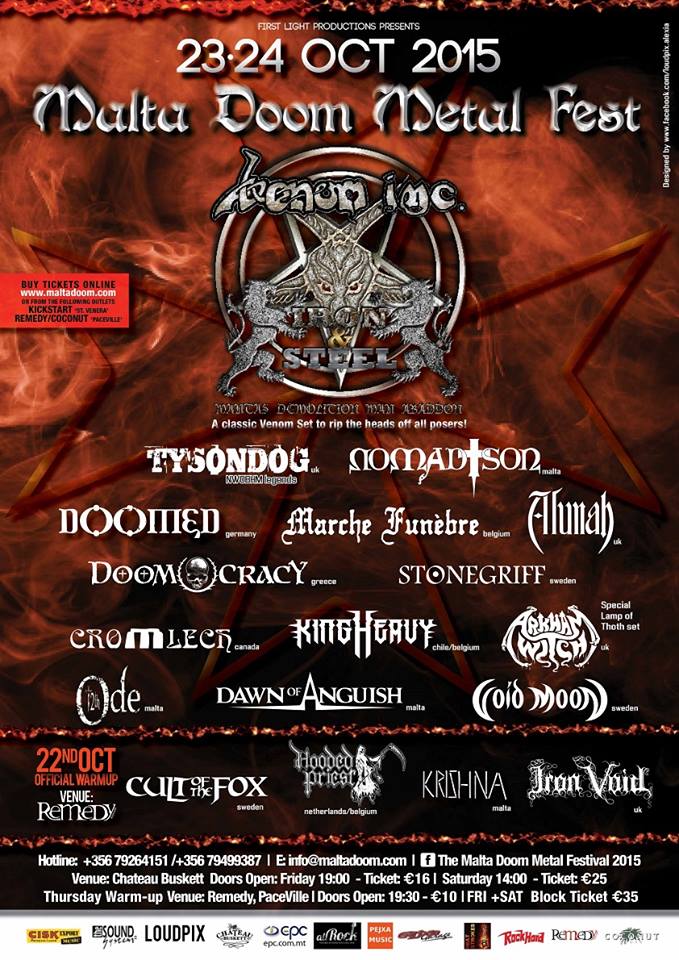