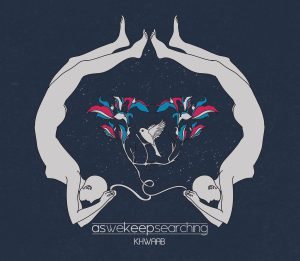 By: A J McQuay

Released on October 15, 2015 via Flowers Blossom In The Space

aswekeepsearching is a post-rock/experimental band hailing from India. Their latest release Khwaab is an excellent instrumental record that, while it fits nicely under the “post-rock” umbrella, deserves to be heard by a wider demographic.

Let me begin by saying that I’ve traditionally been one of those “no vocals in my post-rock, kthx” guys. I’ve always loved how instrumental music is so open for interpretation and allows the listener to draw their own conclusions. That said, aswekeepsearching has me changing my tune and the opening track “Ativa” is to blame. The song pulls you in with a great build towards an almost anti-climactic drop to a fantastic groove around three minutes in. Then around five minutes in… it happened. Someone started singing – *and I liked it*. Maybe it’s because I don’t speak the language and thus don’t know what’s being said, but regardless the vocals are well done and add another layer and dimension to the music. The next two tracks continue the overall vibe set in the opener, with a great spoken word sample showing up in “We Sound Like Strangers”.

The mood shifts with the song “Other Side” and things slow down a bit. This song is well placed on the record and it gives great movement to the project as a whole. The glitchy bit crushed drums in the intro are an example of some great production touches found all over this record. “When Will They Talk?” is more somber and atmospheric with a nice ambient key/synth part floating in the background and good vocal harmonies.

The next track “Catalogues” picks the mood back up after a somewhat sinister sounding opening sequence. A punchy breakdown section here is proof that asweekeepsearching is capable of more than just ambient/atmospheric material. The sparkly guitars joined by drums and glitchy samples towards the end of “Banshee” is one of my favourite moments on the album. “The Moment” is a movie score-style interlude leading us into the closing track “B-303″, which may be my favourite song on Khwaab.

There are great aggressive guitar tones and strong melodies abound, but the rhythm section really stood out to me. The drummer and bass player both sound fantastic and work well together. Electronic elements like synths and pads are also mixed in very tastefully. The production value is very high as well. The songs are mixed and mastered well and the record is cohesive with great dynamics, clarity, and punch. If you like post-rock or other types of instrumental rock, don’t sleep on Khwaab.