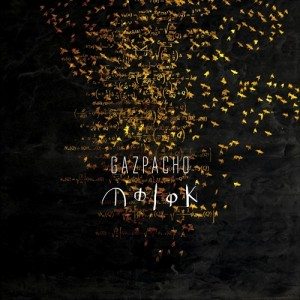 Norwegians Gazpacho never fail to serve up something a little different, and Molok is no exception: apparently, it is an album capable of destroying the universe. How could this possibly be the case? Well, a strange noise at the end of the record will cause the correction software in CD players everywhere to generate a random number every time the CD is played – and if that number corresponds to the actual position of every electron in the universe, theoretically the universe could come to an end. If that sounds far-fetched, you might want to go away and Google the Quantum Zeno effect. Oh, and don’t tell your mum. She’d only worry. Actually, perhaps it might be safer to play the vinyl edition?

Theoretical – and potentially universe-threatening – particle physics aside, Molok is another conceptual offering from Gazpacho, who have been making it a habit of this approach for some time now: their previous five albums have also been conceptual in nature. This time around, the story upon which the album is an early twentieth century fable about a man who notices that whenever the human race worships a god, they are worshipping stone, in some form – the god seems to be chased by his followers into stone, never to return, hence explaining why God seems to have become incommunicado. Consumed by this idea, and by the notion that physics provides a means of projecting the movement of everything in the universe into the past or future, the man builds a machine to calculate the past and future, a machine which he christens Molok. As the machine swiftly becomes self-aware, the man realises that his work may expose things that are best left unknown…

Molok is perhaps not as bold and uncompromising in its approach as the band’s previous album Demon was; but then, nine albums into their career, this is a band who no longer have anything to prove. In many ways, despite its subject matter and its often unnerving feel, Molok is a more musically forgiving record. Whilst Demon was a much starker record, its powerful progressive rock tendencies framed by introspective solo spots and restrained duets, Molok is less aggressive and more obviously band-oriented, all of the tracks being very much ensemble pieces all the way through. For those familiar with Gazpacho’s previous work, the general effect is of something that sits almost exactly halfway between Night and Missa Atropos, with some of the flavours of Demon, and the more song-based structure of their earlier albums, notably Firebird. Those not familiar with Gazpacho’s music should expect something that sounds like Pink Floyd and Marillion fed on a diet of post-rock, world music and Balkan folk.

Like its siblings, Molok reveals its secrets slowly, almost reluctantly. Gazpacho’s albums tend to be slow-burners that overwhelm on first listen, so loaded with imagery that your mind struggles to find something to anchor itself to until it has heard the record several times, and Molok is no exception. It opens with sinister tribal drumming, but it’s not long before the familiar smoky vocals of frontman Jan Henrik Ohme and the lush keyboard work of Thomas Andersen enfold those familiar with Gazpacho’s sonic universe in a warmly familiar embrace. This first track, ‘Park Bench’, builds from simmering unease to grandiose choruses and a thundering, powerful climax with an ease born of a musical telepathy developed over the years. Swells of organ, church bells and who knows what else join the fray; most bands would fumble juggling these seemingly disparate elements, but in Gazpacho’s sure hands the whole never tumbles out of control.

‘His Master’s Voice’ is a sinkhole of simmering unease, whilst ‘Bela Kiss’ is positively playful – its jaunty rhythms interspersed with frantic Balkan folk-style breakdowns that really give multi-instrumentalist Mikael Krømer and guest musician, accordionist Stian Carstensen, a workout. Carstensen amply displays the reasons why the band asked him to contribute to the record, whilst Krømer is, as always, Gazpacho’s secret weapon, grounding their modern sound to earth and lending it a timeless, arcane quality. This is music that simultaneously sounds like it was written today, and a century ago: entirely appropriate for the subject matter at hand.

‘Know Your Time’ is much more familiar ground: an initially bass-driven progressive rock behemoth that utilises the band’s unerring sense of dynamics to unfurl into a Marillion-esque keyboard-drenched epic that ranks among the very best songs the band have delivered to date. Special mention also has to go to Lars Erik Asp’s drumming, which is particularly powerful here, and Jon Arne Vilbo and Mikael Krømer’s soaring dual-solo spot, that successfully echoes the best work of Marillion’s Steve Rothery, long a touchstone for the band. All this, and the album is barely halfway through.

‘Choir Of Ancestors’ returns to a more introspective feel – Ohme’s vocals as intimate and heart-stopping as ever – as the song examines the human ability to keep moving forwards, no matter the odds or the sense of futility. The track acts as an oasis of calm between two more musically ambitious tracks: it is followed by ‘ABC’, which namechecks a number of human endeavours to measure time and man’s place in the universe, showing that Molok’s creator is just the latest in a long line of antecedents.

Those listening on CD are given a further treat at this point in the form of the moody instrumental ‘Algorithm’, which possesses a mesmerising groove – it’s a brief but welcome and highly effective interlude between the body of the album and the closing two tracks, which are Gazpacho in excelsis, containing all they do so well. The eerie yet anthemic ‘Alarm’ is positively filmic in its lush storytelling, building to a series of peaks separated by limpid pools of gliding bass and tinkling keys. Once more, Ohme is at his very best here: his highly emotive voice given the space to breathe by the band before lending wings to their musical ambition.

Grand finale ‘Molok Rising’ opens with a surprise: a selection of the world’s oldest known instruments, the ‘singing stone’ or Skåra stone and a variety of stone percussion, moose jaws, flutes and stringed instruments, all carefully reproduced and played by Norwegian musical archaeologist Gjermund Kolltveit. Kolltveit’s intriguing contributions flow easily into one of Gazpacho’s darkest tracks to date, equal parts The Doors’ ‘The End’ and Floyd’s ‘Yet Another Movie’. A dark cloud of synthesiser hovers over an icy lake of clattering drums, eerie percussion and chiming guitar as Ohme narrates the grand finale, delivering the coup de grace against a background of clocktower chimes and ticking clocks. Is time running out for us all? No spoilers here for those intrigued by the album’s central conceit – it’s far too good a tale to post a spoiler here – but it’s an ending that will definitely leave you pondering the implications of the tale and most likely have you hitting ‘Play’ again whilst you’re about it. But do let the album finish before returning to the beginning – you wouldn’t want to miss your chance to destroy the universe…

Molok is, in its own right, a deeply impressive piece of work. Conceptually intriguing, instrumentally beguiling and emotionally powerful, it’s beautifully composed, played and produced – another practically flawless entry in one of the most consistent back catalogues in modern progressive rock. Like all of Gazpacho’s albums, it rewards familiarity but never loses its initial frisson. As with so much of their work, this is definitely an album best heard in the dark, over headphones with no distractions; it may still sound hugely impressive in the light of day, but away from the sunlight it casts its own very specific and potent spell. History will record this band as one of the most relentlessly adventurous and eclectic progressive rock bands of recent years, but for now Gazpacho remain one of the best-kept secrets of modern progressive rock, and Molok numbers among their finest achievements.