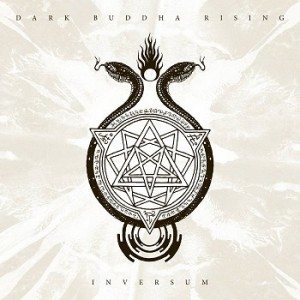 Released on September 25, 2015 via Neurot Recordings

Dark Buddha Rising are described as Finland’s dark underlords of psychedelic drone and on the basis of their fifth album, Inversum, you would be inclined to agree. That is after you have dug yourself up from behind the sofa and regained some sense of composure from the music that you have just heard. Here’s a band who don’t do things by halves and live up to their name by producing music which is so relentlessly “out there” that you could be forgiven for thinking you was losing your mind at points.

As is pretty much the norm now, this new album consists of just two tracks, which bear no resemblance to any song structure whatsoever and instead take their own time to build into what can only be described as a tumultuous cavalcade of noise. At first it’s all a bit disconcerting and if you are not used to this sort of stuff then you would be advised to steer clear until you have some experience. It’s not easy listening you see, and when Dark Buddha Rising get going even the most hardened space traveller can get caught up in their vortex.

‘E S O’ opens in relative clam before building into a swirling mass of noise, which sounds like some rip in the space/time continuum as just opened and all manner of evil beings are flying through. It isn’t helped by the “vocals”, which swoop and soar at you like abandoned souls of the doomed. This is space rock when things go wrong and you bump into those really nasty aliens, the ones that play with your mind.

‘E X O’ is a more sedated affair for its opening ten minutes and you could be forgiven for thinking that the band are going to stay on a much steadier path this time. Evoking dramatic feelings, its repetitive riff builds as the cymbals crash and the bass rumbles in the background. It’s not long before it all goes awry again though and as the winds of change start to howl through the bass rumble, you can sense the foreboding as the band decide where they will head next. It’s a tremendous feat and one can only imagine how they hash up this stuff in the studio.

Dark Buddha Rising certainly hold the medal for most spaced out release of the year so far and it will take a hardened traveller to stay the ride. Once you’re settled in you can then enjoy a fine slice of space rock which takes no prisoners and makes no apologies. After five albums it seems the band are really hitting their stride now and for just under an hour you can join them in their journey to places no normal person should ever go.