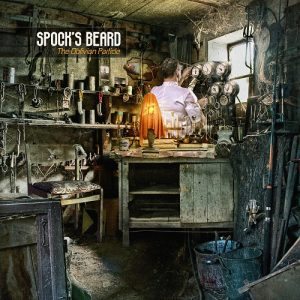 Released on August 21, 2015 via InsideOut Music

Spock’s Beard celebrate their 20th anniversary this year. One of a select few bands who championed progressive rock in the mid nineties, when the progressive music scene was at its lowest ebb since its inception at the fag-end of the sixties, the band have not just survived, but seemingly thrived on adversity from without as well as from within: two departing front-men and chief songwriters later, they remain unbowed.

Their previous album, the rapturously received Brief Nocturnes and Dreamless Sleep, was their first record with new vocalist Ted Leonard (Enchant, Thought Chamber), but also their first with regular live drummer Jimmy Keegan behind the kit full-time (previous frontman Nick D’Virgilio having recorded drums for all the band’s previous albums). Despite D’Virgilio’s long pedigree with the band, the new blood fitted into the Spock’s Beard sound seamlessly. However, whilst some bands would have been content to make the same record again, it is to Spock’s Beard’s credit that The Oblivion Particle is a very different record to its predecessor. Spock’s Beard will always sound like Spock’s Beard: after eleven albums, there is a definite Spock’s Beard sound. That said, the band have never been afraid to tinker with the DNA of their sonic make-up, and this new album sees them do so to a larger degree than on their last few records.

Listeners could be forgiven for thinking that this wasn’t the case based on opener ‘Tides Of Time’, which is very familiar ground for the band and for regular listeners. Its appearance at the top of the album is a reassurance for any listeners who might be concerned about the band abandoning its comfort zone: its keyboard-heavy classic progressive rock sound is as familiar and welcoming as your favoured local pub. It’s nicely sung by Leonard, but it gives plenty of space for the rest of the band to stretch out, especially guitarist Alan Morse and flamboyant keyboardist Ryo Okumoto, who steadily ramp up the tension in a series of instrumental breaks towards the end. It sets the mood perfectly and demonstrates that very few contemporary acts can do this sort of thing as effortlessly and effectively as Spock’s Beard can. Indeed, if there is a criticism of the band’s approach, it’s that sometimes they can slip into piling up the progressive rock tropes until they almost obscure their deft and subtle songwriting: ‘Hell’s Not Enough’ teeters on the edge of taking things too far in this respect, its sun kissed bridges, warm washes of organ, careful acoustic guitar and flute-like keyboard lines evoking mid-70s Genesis almost to the point of parody; happily, Morse’s grumbling New Wave-influenced guitar ensures that the music is always anchored to Planet Earth, aided and abetted by Keegan’s highly impressive and impactive drumming. Whilst most of ‘Hell’s Not Enough’ is pleasantly pastoral, the band also – almost carelessly – throw in a hold-on-tight prog breakdown section that will likely totally wrong-foot the listener the first time they hear it. It is little touches like this that show how it is that Spock’s Beard are still standing when so many copyists have fallen by the wayside over the past two decades.

From the second track onwards, however, there is plenty of evidence that the band is experimenting with its established progressive rock template. ‘Minion’ is a sturdy mid-paced rocker shot through with immaculate vocal harmonies that recall Kansas in their pomp: the opening is pure ‘Carry On Wayward Son’. Spock’s Beard are blessed with an abundance of vocal talent and they’ve always made full use of that fact; this is new light through an old window, though. Previously they’ve usually employed vocal harmony in a more counterpoint-based way that will be instantly familiar to fans of prog legends Gentle Giant; this more classic rock-style harmonising is a relatively new tool and they’re using it more effectively here than in the past.

The whimsical ‘Bennett Built A Time Machine’ sees drummer Keegan given the lead vocal. Keegan handles it beautifully, lending it character but never lapsing into hamming things up. Typically for the band, what is seemingly a fun-filled romp peopled by larger-than-life characters actually has a sobering sting in the tail, a way of writing that The Beard share with illustrious prog giants Genesis. Both bands paint with bold strokes and use humour to press home more serious agendas, and Bennett’s selfishness in the face of his own weaknesses lends this seemingly jolly number a striking impact that is at first not at all obvious. All this, and a wonderful synth adventure courtesy of Mr Ryo Okumoto on the keyboards to boot.

By contrast, ‘Get Out While You Can’ is a sinuous rocker that largely disposes of the usual progressive rock tropes and goes straight for the jugular, Leonard almost screaming out the chorus. This fondness for sturdy riffing extends to the utterly addictive ‘The Center Line’, which picks up where the previous album’s ‘I Know Your Secret’ left off. Meros’ almost Squire-like bass rockets along, the rest of the band up to the task of matching the momentum, allowing Leonard to deliver one of his finest recorded performances to date. Leonard  also finds an opportunity to throw in a knowing wink to the title track of the band’s debut album The Light (“Somebody has to hold it up to the light“), and indeed the whole song seems almost to be a sunnier answer to the band’s more sobering earlier song ‘The Bottom Line’. These little pieces of intertextuality only serve to make the material that much more satisfying to long-standing fans.

‘The Center Line’ also works well to break the tension built by the two longer tracks either side of it; on the face of it, both ‘A Better Way To Fly’ and ‘To Be Free Again’ are both typical progressive rock epics, yet neither of them cleave too closely to the established Spock’s Beard sound. The former builds very slowly from the dark, simmering opening to a rip-roaring none-more-prog blowout scattered with little solo spots, that finally builds into a shuddering wall of sound. It’s undeniably grandiose, yet it succeeds in that it does not find itself in thrall to the prog giants of yesterday. ‘To Be Free Again’, on the other hand, is rather more stately, the star of the show this time undoubtedly guitarist Morse, who unleashes a tremendous climactic solo that somehow evades sounding quite like anything he has contributed before. Morse remains an exceptional if under-appreciated player. It’s such a powerful moment that the sturdy closer ‘Disappear’ almost feels anticlimactic – or at least as anticlimactic as a song containing an explosive keyboard solo that constantly teeters onto two wheels and a Yes-style vocal breakdown can be. Those who opt to pick up the special edition CD of the album also get a further treat in the shape of a tongue-in-cheek reading of Black Sabbath’s immortal ‘Iron Man’. It could rightly be said that it’s a long way from what Sabbath intended – but perhaps that’s the point. The results of Spock’s Beard plundering the Sabbath songbook are probably exactly what aficionados will expect – and that’s at least part of Spock’s Beard’s enduring appeal. They may be masters of their field, but they’ve never been foolish enough to take themselves too seriously.

There’s a definite sense that even after twenty years, Spock’s Beard continue to strive towards a broader sonic palette: something that has to be applauded when even the band have admitted that sometimes negative fan reactions to the more experimental music they have made have made them think twice before placing some of the music on their albums. Striking an effective balance between art and entertainment can be extremely difficult for any band, particularly for bands of any longevity, and it is to Spock’s Beard’s credit that they remain committed to trying new things 20 years, and 12 albums, since their inception. This album may not be different enough to the band’s previous work to appeal to the unconverted, but for existing fans – at least those who don’t want their favourite band to exist preserved in amber – and for those new to the band, The Oblivion Particle is a potent and hugely enjoyable album that showcases the band on truly excellent form. Sometimes veteran bands seem to struggle to find new things to say after years making albums. Based on this record, it seems unlikely that that time will ever arrive for Spock’s Beard. For this, we should all be grateful.