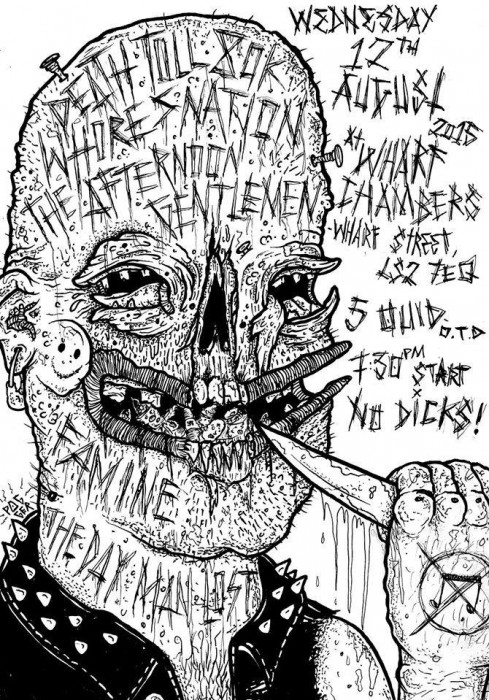 My friend, Carl and I decided it would be cool to head to Leeds for the day, but we were more interested in a gig than we were in the sights and sounds of Leeds as a city. It came down to a grindcore gig in a small venue known as the Wharf Chambers. Not knowing much about the journey we were about to undertake, I took it upon myself to get in touch with the organisers of the gig, one Ben Southern, who was incredibly helpful, sharing various locations on social media we could visit to entertain ourselves whilst we kill time before heading to the gig.

We ended up visiting some local pubs, which was awesome and everyone in Leeds seemed very friendly, which was a refreshing change from the hustle and  bustle of London. We eventually made our way to the Royal Amrouries and marvelled at humanity’s inventions used to wipe out our fellow man and found it all a bit silly. We soon started making our way to the Wharf Chambers and it was quite simple to find, bearing in mind that Carl and I didn’t have the best navigation skills.

Upon entering the Wharf Chambers, we immediately recognised the guys from Whoresnation, who came over and greeted us, having a good chat before making our way to the back, where the rest of the French grinders were having a good time relaxing before the gig.

As everything got set up and merch was set out, the venue, which was a lot bigger than I imagined, started to fill up gradually as I met with the organiser and some other band members at the merch stand. The soundcheck was good and the line-up was stacked and I just knew this was going to be a night to remember.

First off we started with local band Dog Eggs, and yeah I’ll admit that someone had to explain to me what that was to be perfectly honest. As much of a joke as the name is, they don’t fuck around when it comes to music. It was blast off time with some proper grindcore, but with an interesting twist and a lot of energy, which really set the stage for the rest of the night. I found the fact that they had some surf rock like rhythms amongst the abrasive grindcore incredibly refreshing along with some awesome tempo changes. They looked like they had fun whilst playing and in turn the crowd really got into it as well. 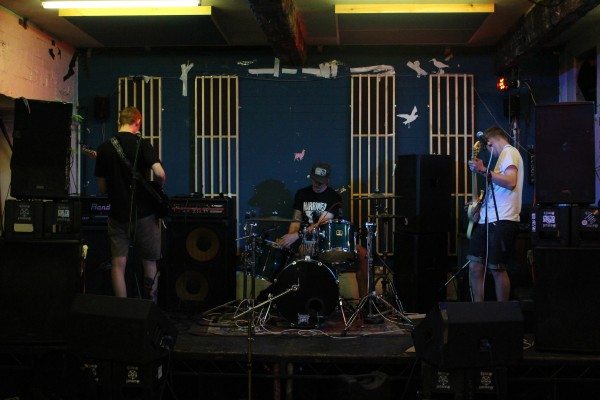 The 3-piece Leeds outfit, Famine brought the energy as they ripped into the crowd at incredible speeds with a more than active vocalist jumping all over the stage and screaming his head off. It was a combination of speed, precision and raw savagery for an entire set, which really was one of the highlights of the show, not to mention that 2 of the 3 members played in Dog Eggs earlier. Incredible rhythms and an all round awesome performance with a very fastcore feel to it as they just powered through their set. Famine are, in my opinion, one of the true gems in the Leeds extreme music scene as they just pulverise you with an incredibly big sound for such a small venue. 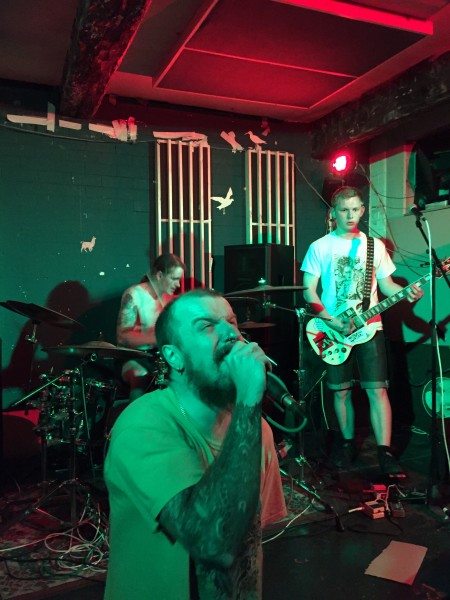 How is it that every time I see French grinders Whoresnation, I am blown away? They were absolutely incredible and I witnessed one of the fastest bands I’ve ever seen and tight to a dime with some incredible music showmanship as they destroyed Wharf Chambers one song at a time. The drumming was especially on point as it complimented some incredible bass and guitar work as they blasted their way through their set with grindcore that doesn’t really stand ceremony as they grind you into oblivion with riff after riff of grinding madness. A relentless onslaught that had the whole crowd losing their minds. Some might say it was the perfect set? I would highly recommend anyone who like grindcore to check these dudes out and if you can, go to a show, you won’t regret it. 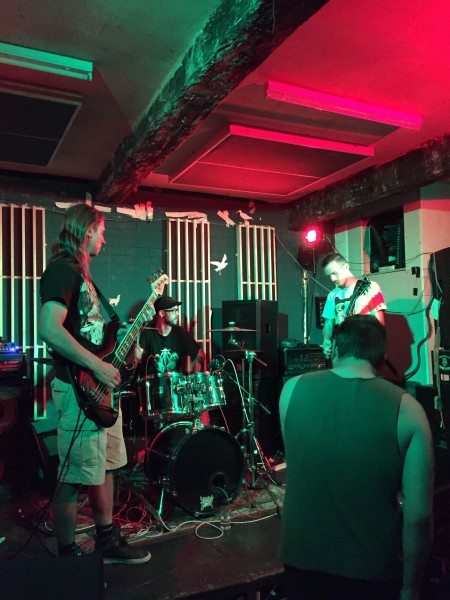 The Finnish grindcore ensemble Death Toll 80k were up next and it was going to be interesting to see what sort of level of intensity they could bring to the evening, with so many awesome bands throughout the evening and the Gents yet to play. Well, it was absolute non-stop balls to the wall intensity from the start with some bangers being fired at the crowd and it was like barrage after barrage of some of the most powerful,crushing and abrasive grindcore I’ve ever experienced live and the size of the venue made it just that much better. The spectrum of grindcore was just on a different extreme. It was in your face and just no compromises as they unleashed song after devastating song, not really giving anyone chance to recover. A complete onslaught until it all grinded to a halt after about 20 minutes give or take and I was left in awe as I just witnessed one of the best sets by one of my favourite bands. Phenomenal performance and they absolutely nailed it. 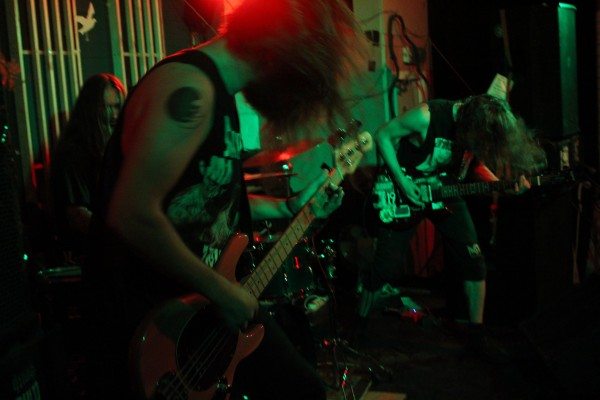 It was finally time for local favourite The Afternoon Gentlemen, who are from a different spectrum with regards to soundscape as the aforementioned Finnish grindcore ensemble. I picked up pretty quickly that they’re merely referred to as The Gents by the locals. Well, what does a bunch of dudes who like booze, skateboarding and grindcore/powerviolence give you when you give them instruments and throw them into a rehearsal space? The answer is simple. Woodhouse Grind Violence! Some incredible material that is on par, if not better that some of the best acts I’ve seen live and it was simply the cherry on top of an incredible evening for Leeds underground music. Not taking themselves too serious, the 5-piece grindviolence machine powered through an incredible set, which had crushing riffs, incredible start-stop section mixed some pretty awesome rhythms and vocal styles, as everyone had a mic. This made for some interesting and hilarious banter between songs, which was something the crowd was totally onboard with as everyone seemed to get into it and just have a blast. 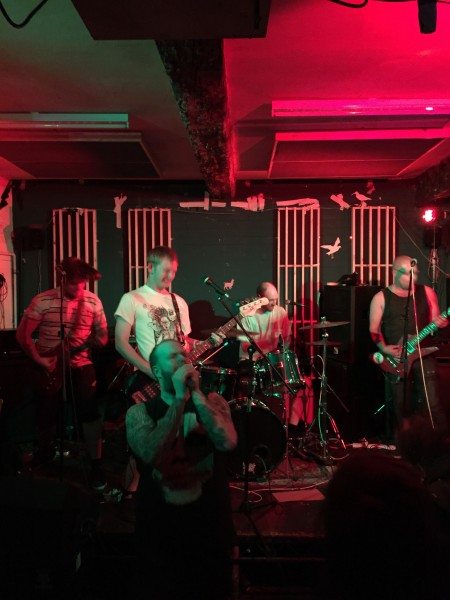 I’ve been to many shows in my life, and this one was probably the best one with class acts all round and incredibly well organised. I can’t wait to head back to Leeds and catch another show like this! D.I.Y or die!

Thanks to Pierre Pibe from Whoresnation for the photos!