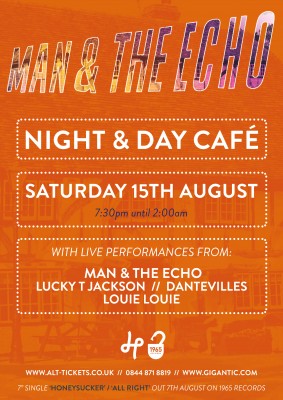 In the familiar territory of Night & Day in Manchester’s Northern Quarter four local, up and coming bands were due to take to the stage. Manchester has a wide variety of gig venues, from the iconic to downright dumps, this one, should be noted for being not only a decent venue with good staff but also a good bar.

To open the evening Louie Louie, a half-mancunian, half-portuguese, rock band. Jangly, poppy guitar, strong drums, bass with a bit of funk thrown in and great vocals from lead singer Rita Faria. The band, despite being together for less than a year showed some good musicality and had some catchy melodies. The songs layered and sounded fuller when Faria picked up the guitar. Drums did wander a bit in places, not for a lack of talent just think that some of the tracks needed a bit more foundation.

There is the basis of some great tracks here, the band need to tighten a little but this is just a matter of time. Tracks such as ‘Carry the Man’ show what this band care capable of. One for the future here I think.

Second on stage were Dantevilles. The started with an 80’s vibe with a big chunk of northern indie. The songs were a bit more complex and interesting than the average indie guitar band. ‘It Might Be Tomorrow’ was a standout track, the band got better once they settled into their set and seemed to feed of the energy of the place a bit more. The vocals, again, were strong with an excellent use of reverb and echo. A few tracks were weak but the core was there. These lads don’t suffer the same problem as a lot of this genre bands in that they sound a bit different. Definitely something there I think, bit of an emerging talent.

Lucky T Jackson were up next. They started with some surf-rock tinged riffs. The band had a lot of energy right to begin with, combined with a nice feel-good 60’s feel. There was a real miss-mash of influence coming across. The vocals remind me of Greg Dulli in Backbeat. Bit of a edge to his singing. ‘This Paticular Girl’ was a catchy track and by this point there was quite a bit of dancing going on, which, to me, is always a good sign. The band were at there best when playing fast and loud. Even better after a few beers on a Saturday evening.

The headliners, this evening were Man and the Echo. ‘Honeysucker’ the first track is upbeat, prominent vocals with a tight rhythm section. The next two tracks, ‘Favorite Band of a Dead Man’ and ‘Vile as You Want’ were upbeat with good interplay between the keys and guitar. The nature of the songs belies the lyrical content. Which is much more political and cynical than the poppy sound might suggest. Other tracks see both a harder, angrier edge and a moody, quieter mood. ‘Alright’ is a great track catchy, great harmonies, stick-in-the-memory song that’s bound to see some more airplay. The evident fan-base in the crowd definitely enjoyed it.’Distance Runner’, ‘Operation Margarine’ and ‘I Don’t Give a Fuck’ are lively tracks, the band showing some talent and energy. Maybe to do with the time of a Saturday night but there was several people evidently enjoying the show. ‘Pulse’, ‘Very Personally Yours’ and ‘That’s Life’ ended the show.

Man and the Echo do certainly have something about them, a catchy tune or two, a bit of indie charm and some meaningful lyrics.