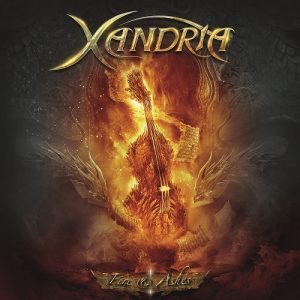 German symphonic rockers Xandria’s Fire & Ashes is an interim release, a treat for fans and aficionados to tide them over until the band’s follow-up to their well-received album Sacrificium is released. Comprising seven tracks – three new songs, two covers, and two new recordings of older Xandria songs – and housed in a strikingly attractive sleeve, it’s half an hour-and-change of everything that’s great – and disappointing – about this undervalued band.

‘Voyage Of The Fallen’ makes a lively opener: perhaps typically for Xandria of late, it’s an Oceanborn-era Nightwish style juddering rocker: the guitar lines separating the Epica-style choral chorus from the verses is deeply reminiscent of ‘Gethsemane’ from the aforementioned album. Already it’s plain that Xandria’s biggest problem remains the degree to which they are in thrall to the Nightwish legend and to predictable symphonic metal tropes: the very thing that made Sacrificium simultaneously a joy and a missed opportunity.

‘Unembraced’ similarly falls victim to the same problem: it’s beautifully and powerfully played, and formidably sung by the always superb Dianne van Giersbergen, but it so clearly owes most of its DNA to Nightwish (in this case equal parts ‘I Wish I Had An Angel’ and ‘Storytime’) that it feels familiar – and safe – before it’s even halfway through. There is a brief flash of some real teeth in the middle eight, with some brilliantly menacing guitar riffing, but it’s over so soon that if you blinked, you’d miss it.

Happily, the third and final new song on offer here goes some distance towards reassuring those who might be worried that Xandria are turning into a tribute band. ‘In Remembrance’ is a gloriously atmospheric ballad that really displays van Giersbergen’s voice at its best. It’s refreshingly free of the overt Nightwish trappings of the opening two tracks, possibly because the sparser arrangement gives the band more of a chance to breathe. Whilst grandiose, it never sounds overly imitative; and whilst we’re still in familiar territory for symphonic metal fans, the band do at least sound truly like themselves.

It takes a brave band to cover Meat Loaf’s ‘I’d Do Anything For Love (But I Won’t Do That)’, a song already rich for parody, but that is indeed exactly what Xandria have done. In theory, Jim Steinman’s chest-beating romantic gothic sensibilities are designed for symphonic metal, so it may not come as a huge surprise to find that this actually works extremely well. Perhaps surprisingly, Xandria resist the temptation to really rock it up: it’s a surprisingly faithful reading, with little or no added guitar chug. Guest vocalist Valerio Recenti turns in a fine vocal performance towards the end as van Giersbergen’s love interest, but for all the wonderfully recreated sturm und drang, this track, more so than perhaps any of the other tracks here, really is all about van Giersbergen’s tour de force vocal. She emotes like a champion throughout, and for all Steinman’s faintly preposterous prose, van Giersbergen really does make you believe the whole wonderfully overwrought thing.

Two older Xandria tracks, fan favourite ‘Ravenheart’ and ‘Now & Forever’ get dusted off for new treatments. These curious are almost certainly going to appeal to the faithful rather than new listeners, being considerably less ambitious musically than Xandria’s more recent work, but the new-look band handle them both with aplomb. Both new versions are almost certainly improvements with slicker production and tighter playing; however, ‘Ravenheart’ fares best, a mid-tempo ballad that is given wings by Van Giersbergen and a rich arrangement that really gives it a unique flavour. It is striking, however, how much less these two older songs sound like Nightwish than much of the band’s more recent work. It’s a sobering thought, but the general impression this gives is that perhaps the band have developed their technical skill at the expense of sounding like themselves.

Fire & Ashes ends with another cover, this time Sonata Artica’s ‘Don’t Say A Word’. It certainly has bags of energy – launching itself forward with dizzying momentum, if anything sounding faster and more intense than in the hands of its originators. Van Giersbergen turns in a dynamite performance once again, and guitarist/keyboardist Marco Heubaum’s interlocking keyboard parts give it a gloriously gothic flavour – he even turns in a respectable keyboard solo. The rhythm section is on especially great form for this finale, too – Gerit Lamm’s drumming, in particular, is positively seismic.

Fire & Ashes is a welcome but unusual offering from an accomplished and under-appreciated band. It’s difficult not to enjoy something so brilliantly played and produced, especially for fans of the genre. However, it’s also hard not to come away from listening to this EP with the impression that the covers and the older songs are the most striking and enjoyable tracks on offer here, which perhaps should sound a note of caution for Xandria going forward. The band have talent to spare, but the general impression is of a band that are perhaps trying a little too hard. They might best serve themselves by sitting down to write something strikingly original that only they could have written, rather than relying perhaps a little too heavily on well-worn symphonic clichés. Then, perhaps, they may finally receive the kind of attention that they so deserve.