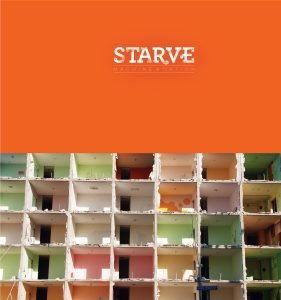 Released on June 29, 2015 via Badger Records/Wrath of Time Records

It’s a slightly odd word to start a review, I appreciate, but it does accurately convey the noise I made several times through my virgin listen to Machine Nation, such is the scale of the riffs in this tightly coiled, nuanced release. I came to these guys completely cold, have never heard of them prior to spinning these tracks for the review, and having done so I will be tracking down their back catalogue.

Starve are from Holland and describe themselves as a sludge band; while I can see that, I don’t believe it completely covers their sound. The music is tense, groove-led, with a dirty Southern feel and aside from usual sludge cornerstones, it also has touches of variously The Melvins, KEN mode’s latest album, hardcore weirdoes Circle Takes The Square, the atonal aural feel of some ‘90’s noisy alternative bands such as early Helmet and Unsane, and even odd touches of a heavily downtuned grunge on ‘IOU’. It’s an odd, dizzying mix of ideas, which despite snippets and sounds that recall other bands, hangs together magnificently, feels thoroughly original, and is both despondent and thoroughly angry at the world. When the vocalist intones “Isolation breeds anger” on ‘Isolation’, it honestly feels like he means it.

Some of this is down to the production job; the guitars are serrated, the bass distorted and tonally sitting closer to the guitars than the bass spectrum, the drums sound big and the mix of half spoken, half shouted and slightly atonal sung vocals sit proudly atop the mix, with interesting lyrics clearly enunciated. The sound and mix feels more in common with hardcore than a standard sludge band. The song-writing is ridiculously good. The riffs are strong with this one – ‘Empty (S)hell’ and ‘Shady’ being great examples, but the dynamics of the songs are what keep me coming back to this album. Quiet / loud dynamics are hugely overused elsewhere, but the drop to a reflective section in ‘Granite City’ takes me by surprise every time I hear it. It’s a calm eye in a storm of swirling riffs; a trick that is used a lot by sludge bands, but rarely so well as here; coupled with a bleak lyrical stance – sample line “the streets are extended gutters pouring into an abyss and the gutters are full of piss” – the song maintains variety and intelligence throughout without really giving the listener time to get comfortable or overfamiliar with any aspect.

This is sludge with a different objective; sludge that is not content with simply battering the listener into submission, or drowning them in tar riffs. The myriad influences, songwriting depth and ear for battered melody speaks to something more. That’s not to say that lava-thick riffs are not present, and that the threat of aural battery is not delivered upon – what makes this record special and worth your investment is the restraint displayed. You will get battered with a riff, but you will have to wait until the time is right, and then when the payoff is delivered Starve demonstrate the good sense not to keep hitting the same button over and over again. Repetition works sometimes, but too much breeds contempt, and usually boredom. I’m pleased to report that is not an issue with this record, with a perfectly pitched set of riffs, ideas and progression.

As I’m writing this I’m listening to the grinding mid-section riff and build-up and gurning of ‘Accept Defeat’. Actually gurning – it’s not a pretty sight. This song is a perfect expression of exactly the eclecticism that I love about this record – stoner grooves about for the first couple of minutes, dropping into a short grindy riff and then delivering a huge payoff with a vocal refrain that sounds like it’s been dragged out of a 90’s hardcore track – “you’ll take the violence to your grave, because you can’t ever take it back” – and dropping into a huge riff at that sweet spot that cracks a big involuntary smile on this listeners’ face. It’s clever, but never smug, always emotive and direct. It just works.

It’s very easy to overthink this reviewing lark, to get carried away with intellectualising music and ignore the visceral joy of it; to use 500 words when five will do. In that spirit, here’s my five word review:  “It’s just a great record”. That covers it nicely, end to end, a great record. I’ve not got a bad thing to say about it; I’ve ordered a copy of the vinyl. Do yourself a favour and go and check it out.