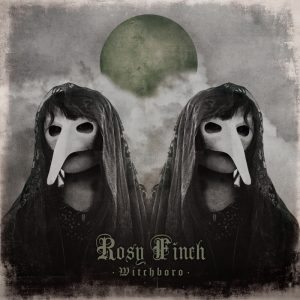 It’s almost an unwritten law by now that any band which consists of a trio of musicians must explode with tight, powerful energy and sound like more than the sum of their parts. Think about some of the greats and you see a trend emerging of a close knit bunch of musicians, almost psychically fused in what they are doing and creating a perfect storm. You can add Rosy Finch to that list now and, whilst they may not quite hit the giddy heights of say, Nirvana or The Jam, it’s surely only a matter of time.

That former band provides some sort of reference point for Witchboro, the first album proper for Rosy Finch after their debut EP, Wolves Waiting, as they build on their post-grunge sound and infuse a punk energy into an harmonious stoner rock sound. Like a pent up ball of energy, the first half of this album literally falls over itself in its narcissistic glee. In fact, if they had stopped there it would have been job well done.

You see, Rosy Finch stand out from the crowd by knowing that whilst there is a lot of ground to be trod in bring a full on punk stoner band,  there are also other avenues to explore and after you have delighted to the explosive sounds of ‘Úrsula’ and ‘Sexkinesia’, the album takes a sharp turn into more experimental territory with ‘Polvo Zombi’. From now they sound like a completely different band.

Once the shock of the change clears you realise that actually, it makes complete sense and once they hit highlight ‘Ligeia’ you will have completely succumbed to this band’s charms. Dark, elusive and grandiose, the three piece shimmer in pure psychedelic gothicness before unleashing yet another riff. Take ‘Will O’ The Wisp’, which stutters into life before a full on melodic riff reminiscent of Hole or early PJ Harvey rips you a new behind. Stunning stuff.

Rosy Finch are a band who you want to stay around forever. They’re the sort of band cults grow up around and whilst they may have missed their zeitgeist by twenty years, who’s to say there isn’t an appetite for this sort of music anymore. Emotionally visceral, Rosy Finch offer a marvellous escape from a humdrum life. Get this band into your life as soon as you can.