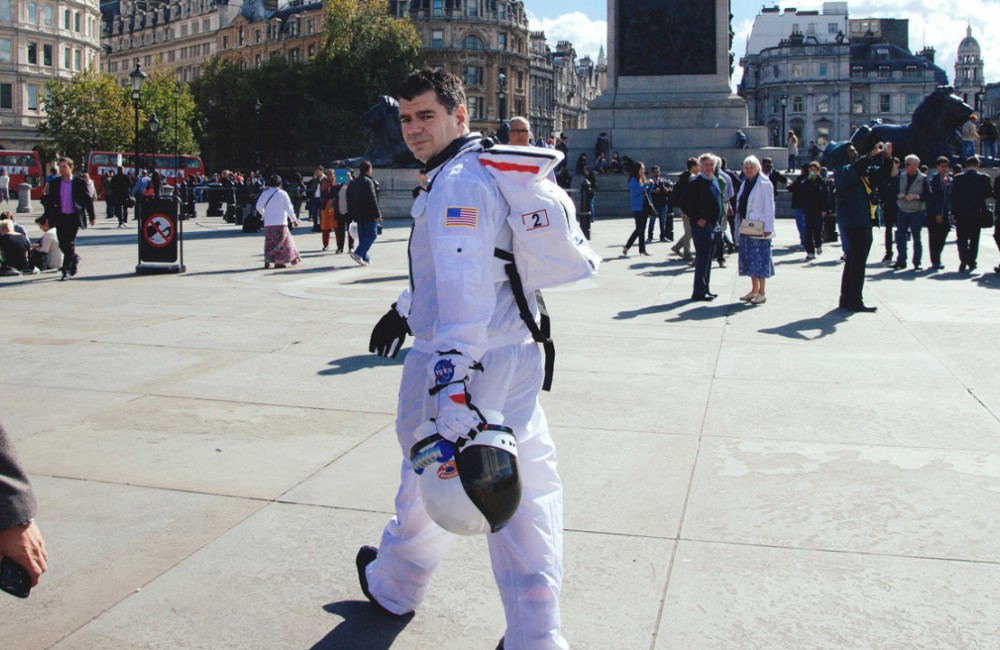 Guitarist/singer/songwriter/producer John Mitchell is well known to progressive rock fans across the world thanks to his contributions to projects by bands as diverse as Arena, It Bites, Kino and The Urbane, not to mention guest appearances and production work with a large number of other bands. Whilst he has been the driving force behind some of these projects in the past, he has recently released a new album of self-penned material under the moniker Lonely Robot, entitled Please Come Home. Dave Cooper tracked down the tireless Mitchell as he was preparing for Arena’s European tour earlier in the year to find out more about the inspiration behind the Lonely Robot album, where it fits into the pantheon of his other work, and what’s next for Lonely Robot.

(((o))): Although you’ve been the chief songwriter in bands before, Please Come Home is strictly speaking your first solo record. And yet you’ve released it under a project name rather than using your own name. Is there any particular reason for this? Do you feel that putting your own name on the cover is in some way limiting?

John: I think the simplest reason is that Lonely Robot sounds considerably more interesting than John Mitchell. That plus the fact that there is already a Joni Mitchell, and I don’t want to accidentally freak out her fans with space prog!

(((o))): By all accounts you completed work on the album very quickly – in around two months give or take – even whilst undertaking production work for other musicians. Is it fair to say that you’re extremely driven? Or a workaholic? Or was it simply a case that this was an album that just poured out of you? Did you set yourself a specific deadline, or was it a case of it being finished when it was ready?

John: I’m the arch procrastinator. I’m also incredibly lazy. The only reason it got done so quickly is that the OCD element of my personality doesn’t allow me to stop once I’ve started something until said thing is completed. This album certainly took a long time to get going. It was like stating an old knackered lawnmower! You might say I’m conflicted.

(((o))): It must surely have been a real challenge to complete the album that quickly, bearing in mind the roster of guest musicians. It’s been said that organising musicians is like herding cats – is it really that much of a challenge?

John: Not really. Some of the guests sent their parts in remotely and I was able to continue working around them rather than waiting for contributions to arrive. Everyone who guests on the album seem to be a lot more together and efficient than I am (laughs)!

(((o))): You’ve said that the name Lonely Robot reflects the human condition – that ultimately we are loners who long to make social/emotional connections. The explosion of social media in recent years certainly seems to bear this out. Could it be that social media is the ultimate expression of your project title: people sitting alone in front of their screens whilst undertaking as many interactions as they can?

John: Yes. Exactly that. You have hit the nail on the head. We have become a synthesised society. In a bid for maximum social interaction, we have become more disconnected than ever before from those who immediately surround us.

John: The significance works on several levels. The primary significance is based on my theory that Earth isn’t home to us and we are merely visitors. At the very least we are a hybrid species intent on being at odds with our surroundings. I personally feel a great disconnect with this planet. We belong elsewhere. We’re not home.

(((o))): The album doesn’t have a specific narrative, but explores various ideas related to the theme embodied in the project title – this need we have to form partnerships and connections. The album reminds us that this can be disastrous: as in ‘God Vs Man’, where our rapid technological progress sees us expanding outwards across space in an almost virus-like manner. Do you feel that this tendency of human beings is somehow irresistible, and that we will most likely be responsible for our own destruction?

John: I think it’s human arrogance to think we will be responsible for our own destruction. The planet and the universe surrounding it are far greater and far more powerful than we can imagine. The planet is warming up in order to get rid of us much like the manner in which a human body gets rid of a virus. I recently saw a documentary on the subject of how long it would take the planet to wipe out all signs of human existence should we systematically vanish. All traces of our buildings and roads and factories would have been reclaimed, devoured and engulfed by nature within three hundred years. Compare that to how long the planet has been around. It’s certainly food for thought.

(((o))): Could you tell us a little more about some of the other songs, lyrically speaking? I’m especially intrigued by ‘A Godless Sea’ and ‘Construct/Obstruct’.

John: ‘A Godless Sea’ was inspired by the rather tragic nautical endeavour of Donald Crowhurst in the late 1960s. ‘Construct/Obstruct’ is about our need to constantly advance, build and destroy in equal measure and not preserve.

(((o))): Do any of the songs stand out as having been especially good fun to write or record?

John: ‘Lonely Robot’. Mainly because I had no idea whatsoever where it was going until I got there.

(((o))): And were any of them difficult to get right? Did you have any ‘problem children’ on this record?

John: Not really. If you write to a title, the song sort of writes itself. I don’t find making music to be too problematic. It’s all the third party nonsense surrounding music that I don’t deal with so well.

(((o))): You’ve said in other interviews that live performances are possibly unlikely unless you find yourself able to truly give the material the epic treatment it deserves; I notice, though, that you’ve posted on Twitter asking how people would feel about a one-off special show later in the year. Can you tell us anything about whether this seems likely to happen and what form it might take?

John: Two shows. One in Holland at the Borderie on December 4th and another in London at the Scala on December 20th. I hope to showcase songs from the next album at these two gigs.

(((o))): I have to offer congratulations on how well Please Come Home has done – #71 in the UK album chart, which is deeply impressive for such a comparatively low-key release. Did you have any idea that there would be that level of support for the album? Was it a “Dark Side of The Moon” scenario, where you listened back to the completed album and thought, “Hey, this is pretty good actually!”?

John: Not really. I’m as surprised as the next person. It’s certainly encouraged me to make another one. I like every album I like for about five minutes then my mind moves on to the next one and the last one gets filed in a bin in my mind.

(((o))): The next question has to be: will there be a sequel? And assuming there is, do you have any ideas about where it will go, thematically? I know you tend to write to a theme, or a title, or a combination of the two…

John: The next one will indeed occur. It will be called The Big Dream. It will explore the importance of what happens in our subconscious.

(((o))): Please Come Home does have a very different flavour to your work in It Bites and Arena, which is obviously couched to a much greater degree in progressive rock – and in the case of Arena tends to be very much darker in tone. Do you have an inner switch of sorts, that you can flip to put yourself in “Arena mode” or “It Bites mode” and so on, or does it all come very much from the same place?

John: Well I think that’s one of the things I struggle with in It Bites. There is always a nagging doubt as to whether what I am writing even fits the It Bites remit. As for Arena, I’m not a principle writer so such a problem doesn’t occur.

(((o))): You’ve talked before about Lonely Robot almost filling the gap left behind by Kino, which you say seems unlikely to be resurrected. Do you feel there’s a very close kinship between this project and Kino? If not, how do you feel they differ?

John: Not really. Kino sounds very dated to my ears now. The point of reference was more from the fact that I largely wrote all the music on Picture and it felt like my baby. I was sort of finding my way with that project. I’m a bit more sussed these days.

(((o))): You’ve done a great deal of production work for other bands, and have guested on quite a few records by different artists. Which do you prefer to do? Is one easier than the other, or more rewarding? If you had to choose one to do, which would it be?

John: Production is fun but it’s a means to an end in many ways. You’re assisting other people’s dreams. It’s a day job in many ways. Doing my own stuff is far more rewarding.

(((o))): Much continues to be said of your formidable guitar playing – who would you cite as your biggest influences in that area?

John: Well I don’t really practice any more but back in the learning phase it was all about Trevor Rabin, Ty Tabor and Francis Dunnery, and it was Eric Clapton that got it all started.

(((o))): Arena are about to hit the road with an extensive bout of touring in support of their new album The Unquiet Sky – what can people expect from the shows if they go along?

John: They can expect to see the band that “dry ice was invented for”.

(((o))): ‘Prog’ (whatever it may be) has become almost fashionable in recent years, with artists seemingly much more at ease with admitting to progressive influences. Do you feel that this increased focus on what has been deemed deeply unfashionable for so long has led to a renaissance of sorts, or do you think it will naturally only ever be a niche market?