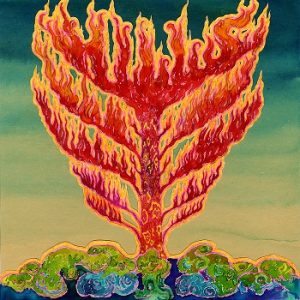 Released on August 28, 2015 via Rocket Recordings

After last year’s Master Sleeps album and a defining set at Liverpool Psych Fest, Hills have a lot riding on this new album Frid and with label-mates Goat making waves in even bigger circles it’s not too much of a leap to see them joining them soon. If there is any hope in this world then this will happen and if it does then Frid will be the perfect album to introduce this quite magnificent band to a wider audience.

Where Master Sleeps set it’s stall out as a pulsating psychedelic dance experience, for me it never quite worked on album. Live, though the band were something else and free of the strictures of the studio, they set about freeing those songs in to the ether. To follow up they have gone even further out and in an effort to bring some of their more out-there influences into play, have created an album which is maybe less accessible than Master Sleeps, but so much more enjoyable.

Not that you would recognise this new-found freedom on opening track ‘Kollektiv’ which is basically a rehash of something of Master Sleeps. It’s the perfect red herring though and as it’s pulse dies down and the bubbling start of ‘National Drone’ begins you start to hear new sounds erupting. About one minute later you may be forgiven for thinking you are on a full blown mushroom trip.

Frid owes a lot to 70’s experimentalists Brainticket and it’s their classic Cottonwoodhill with it’s pervading world music sounds which come to mind as Hills go deeper into themselves. Delving into their no doubt deep record collections for influences, the acoustic beginning of ‘Anukthal Is Here’ brings to mind late 60’s acid folk before exploding in psychedelic reverie. ‘Milarepa’ confuses with it’s backwards sound which makes all attempts to twist your mind into melon shapes before throwing you on to another planet with ‘Och Solen Sankte Sig Rod’ which niggles away as a slight bluesy guitar melts in your ears.

Throughout this album there are moments of absolutely divine inspiration that get you scrabbling for the rewind button just to make sure you really heard what you thought you heard. Instruments and vocals drop in as if from nowhere then float back out but everything coalesces into a formidable sound. It’s the album Goat should have made after World Music although if we’re being honest this is much better than anything from that prior band.

Maybe the deeper sounds will put off some of the fans caught up by Master Sleeps but the ones who stick around will be rewarded so much. Hills have stepped up another level with this album and you’ll be hard-pushed to find a more psychedelic experience this year (or any year for that matter). Totally peerless in what they are doing, this is Hills’s time. This is real world music. 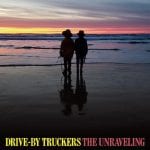