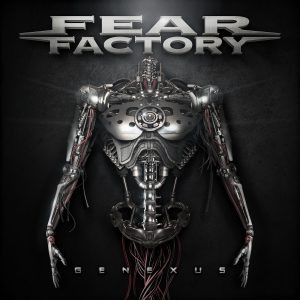 I was first introduced to Fear Factory through an unusual source. My significant other half around 2002/2003. What’s so unusual about this is she is probably the polar opposite as far as musical tastes go. The song in question was ‘Ressurection’ from the Obsolete album. This was and still is a belter of a song. So roll on a few years and I have the chance to review the new album Genexus.

So first off since the last album there have been a couple of changes to the line up with Mike Heller on drums and earlier this year Tony Campos took up bass duties. The vocals remain with the unmistakable voice of Burton C. Bell and the heavy as shit riffing continues to be dealt out by Dino Canzares. Lets just say that after a few plays this is a classic Fear Factory album. It’s got everything you would expect, from the dropped tuning straight from the pits of hell to the tight as shit double bass drumming and Bell’s switching from extreme aggression with the vocal delivery to melodic choruses melded with keyboards and a few samples thrown in for good measure. If you don’t believe me just check out songs like ‘Soul Hacker’, a song so heavy that your speakers and headphones will beg for mercy from the work out they will get from it or ‘Dielectric’, with an opening orchestral string sample luring you into a false sense of security before hitting you smack up the face with enough g force to cause G-LOC. ‘Regenerate’ opens with a Pink Floyd/The Who kinda keyboard riff, which have been given a speed metal makeover, before the heavy onslaught begins.

In fact listening to Genexus now it really shows how underrated Fear Factory are. These guys churn out quality on every album and be assured that there isn’t a weak song on this one. This band have probably influenced more bands, not only in the industrial genre that they are most known to inhabit, but in other sub genres than they are given credit for Slipknot, Stone Sour, Linking Park and Disturbed instantly spring to mind for me. Fear Factory also had a hand in influencing other genres that have fizzled out (nu-metal… Thankfully) with their dropped tuning riffs, samples and use of keyboards  and they were at it years before these others and have continued on after the others have faded away.

The only time the album gives you a break is the last song ‘Expiration Date’, which drops the bpm’s down and is as close to a ballad as you’ll get.

Music and various genres rise and fall and strong bands and genres also come back into fashion at some stage and with an album such as Genexus this should bring Fear Factory back into the spotlight. The Industrial Revolution restarts again and Fear Factory once again are the pioneers.