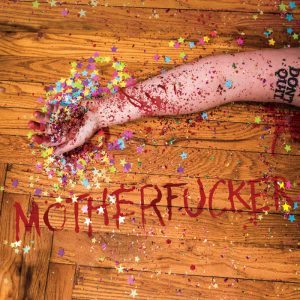 This Motherfucker is great!! It’s not every day that you can write a review that starts off like that. An extremely strong name for a band, it’s bold and offensive (to some), but it’s also a massive statement of intent. A kind of Fuck You, this is us, we’re in a band and don’t give a shit if you like the name are not. It flips the middle finger to the mainstream as well as it’ll take a brave section of  the media to write about, play or even utter the name of the band even in these more liberal of times. Personally I think the name is great and certainly a conversation starter and a way to get the band noticed. However sometimes with a controversial name it detracts in a kind of gimmicky/jokey kind of way, hopefully this won’t be the case.

So c’mon Motherfucker, let’s see what you have to offer with the album Confetti. First off I like everything about this, from the album cover to the song titles everything reeks of attitude and confidence in a kind of take us or leave us, cause we don’t give a shit. Track 1 ‘I’m Fucking Dick Dale’ is a cracking tune that has actually been added to my bike playlist that gets me into work in the mornings; it’s also my favourite track of the album. It has a great driving pulsing riff and some catchy vocals and like the rest of the album everything is played and sounds great.

Although it would be easy to compare Erika Rickson (drums), Erica Strout (guitar), and Mandy Branch (bass) to the like of other female rock acts (Hole, Mellisa Auf der Maur, L7 etc.) I would say that they are more like Queens Of The Stone Age musically with some L7 thrown in for good measure.

Apparently the band got together as a one off to play a festival and they must have went down a storm if this record is anything to go by. It’s a really good thing that they decided to keep the band going as they have delivered a cracker album here. The remaining 8 tracks are all great tunes that sound really fresh but with solid foundations in alt rock with some punk undercurrents and as previously stated great titles such as ‘Methwitches’, ‘Carl Sagan’s Ghost’, ‘Confetti (In Your Fucking Face)’ and ‘ZANG!’ to name but a few of them.

Thankfully the girls do the name justice and show that they are a serious force to be reckoned with. Hopefully they won’t be held back in any way cause from the name to the album these ladies rock. I just hope they gather enough momentum to get themselves over to Ireland so I can check ‘em out live. You should check these Motherfuckers out as well, you’ll be glad you did.