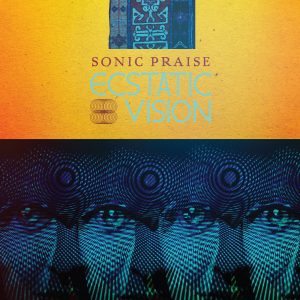 Another week, another heavy psych band turns up, but such is the superb pedigree at the moment you really don’t mind and with Ecstatic Vision you may just find yourself with another obsession. You see, it’s bands like this that raise their very own cults with fans latching on and never letting go. It worked for High On Fire and it works for many others. It is therefore fitting that there is a faint air of religiosity about this band.

It’s all in the delivery and how they create an intense storm that begs full immersion in it’s happenings. Sonic Praise is an apt title indeed and there are times when you may actually think you have met God as you pummel along yet another riff. There are also moments when you may feel like the Devil is on your tail too. Light and dark, exactly how psych should be.

Heavily influenced by Hawkwind and early Amon Duul II, it’s an intriguing cross between biker rock and krautrock, which seems to be de rigueur for the heavy psych scene these days. Rather than rely on peyote fuelled riffs, Ecstatic Vision take there music off into interesting angles often causing you to forget your surroundings such as on the long ‘Astral Plane’ or the stunning title track, which builds slowly from seemingly nothing into a massed tribal fury.

It’s not an album you can just drop into although each track does stand on its own. It’s all in the way each one complements the previous as it builds towards a sort of epiphany. It’s a journey through weird avenues of the mind with unusual links to Eastern mysticism and Western rock and roll. It’s a mix that has been used since the heady days of the 60’s and still works now.

Ecstatic Vision are a bit heavier than some of their counterparts but they also possess a great sense of melody and musicality that makes this album so accessible. Not that you would allow any uninitiated heavy psych listeners in on the trip though, as things do get quite intense. For the hardened psych head this is brilliant stuff and offers enough diversions to make it stand out from the crowd. We look forward to seeing what other rabbits this band can pull out of their collective hats.