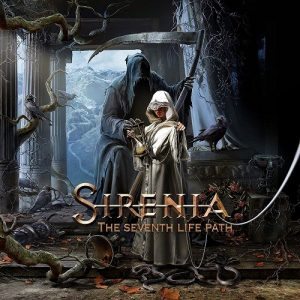 Sirenia are the brainchild of Norway’s Morten Veland, who founded the band following his departure from Tristania at the end of 2000. Veland had co-founded Tristania in 1995, and his decision to leave the band was a surprise to fans at the time. The reasons given for Veland’s departure were those old chestnuts, “musical and personal differences”, and whilst Sirenia’s debut, 2002’s At Sixes And Sevens wasn’t a huge stylistic leap from Tristania’s pitch-black gothic metal, as the years have passed, the two bands have to some extent diverged musically as they have both developed. Sirenia have always retained a very gothic sensibility, both musically and lyrically. Veland has penned Sirenia’s material himself, providing a clear continuity of style and content. Indeed, Tristania on record has typically been very much Veland’s baby, as he often plays or programs all of the instrumentation, a situation which has any number of pros and cons.

Sirenia’s early years were dogged by personnel problems: most particularly with regard to vocalists. The first three albums released by the band all featured different vocalists: it seemed that Veland simply could not hang onto them. Whilst change is often a catalyst for musical development, it can also be disruptive and there’s little doubt that the changes in personnel hamstrung the band’s early momentum. By the time Monika Pedersen, who provided vocals for the band’s third album, Nine Destinies and A Downfall, announced her departure in 2007, it must have seemed to Veland – and indeed many fans and observers – as if the universe was trying to tell him something. What Sirenia badly needed was some continuity beyond Veland himself, new blood that would stick around and develop, much as Veland’s own writing was evolving.

Happily, that new blood wasn’t long in arriving. Spanish singer Ailyn was invited to audition for the vocalist position, and beat a reputed 500 hopefuls in order to secure it. On the surface, Ailyn was an unconventional choice: a then-recent entrant to Spain’s edition of The X Factor TV show, she had also been part of Charm, an all-female group whose specialty was Japanese popular music. Hardly the background typical of someone auditioning to join a Norwegian gothic metal band, but Veland clearly saw something in Ailyn that appealed to his sense of where he could take Sirenia’s music. Ailyn made her debut on 2009’s The 13th Floor, and immediately split opinions: her pop edge brought a new flavour to Sirenia that her predecessors had not, and not everyone felt the change was for the better. Sirenia’s next album, The Enigma Of Life, would see them drifting still further towards a highly melodic, almost mainstream radio-friendly style, with shorter songs and huge choruses an increasing feature of their output. Reviews were mixed: some critics finding the more melodic feel at odds with Veland’s previous output with both Sirenia and Tristania, and others applauding Veland’s developing song craft and his willingness to experiment with an established formula. Much was said once again about Ailyn’s vocal style, some of it perhaps cruel and dismissive. Perhaps somewhat stung, perhaps through a sense that she wanted to develop and train her voice to better serve the band, Ailyn retreated for additional vocal training, and Veland returned to the studio.

The follow-up, Perils Of The Deep Blue, was some time in emerging, and upon its release it was immediately apparent why this was the case. Veland had, by his own admission, thrown everything at the new record to make it Sirenia’s best to date, and it made for a striking contrast with The Enigma Of Life. Whilst some of the big pop choruses remained, by and large Perils Of The Deep Blue was a much more ambitious undertaking. Veland’s songwriting was more varied than ever before, with sprightly rockers settling alongside more unpredictable fare, culminating in the 13-minute ‘Stille Kom Døden’, an oppressive thundercloud of a track with a truly progressive sensibility. Ailyn’s vocals, too, were much improved: a non-English speaker when she joined the band, her diction had vastly improved and her vocals possessed greater range and power. In short, the extra time spent working on the record had really paid off.

The Seventh Life Path is the band’s latest offering, and picks up where Perils Of The Deep Blue left off. The more progressive, expansive tendencies of Veland’s writing are given free rein once again, with many of the tracks clocking in around the six or seven minute mark and featuring numerous instrumental flourishes. Whilst there’s nothing quite as expansive as ‘Stille Kom Døden’ this time around, there is a sense that Veland is continuing to enjoy the space to explore less obvious song structures. This is especially notable on tracks like ‘Once My Light’ – surely one of the most uncommercial and seemingly illogical choices of promotional single ever made, if Veland was looking for radio play – the positively Wagnerian ‘The Silver Eye’ and the apparently Game Of Thrones-influenced ‘Sons Of The North’ which packs a lot of drama into its eight minutes, including a brief but expertly managed excursion into pure doom, with a grinding, descending riff that turns the whole track on its axis. Similarly, ‘Earendel’ is broken in two halves by a truly unexpected middle eight, where a ghostly pipe organ accompanies Ailyn in a woozily romantic interlude. As the song abruptly returns to its driving, drop-tuned riffing, it’s hard not to afford Veland’s ambition a knowing smile.

That’s not to say, however, that Veland’s dalliance with more radio-friendly fare is forgotten: ‘Elixir’ is a gloriously anthemic number, even with the choruses rendered in Veland’s gloriously reliable growl, and wields a shield of unapologetic Eurodance electronica with aplomb. Likewise, ‘Serpent’ and even the decidedly progressive ‘Sons Of The North’ aren’t afraid of a big Eurovision chorus and immediately memorable, hooky melody lines. Perhaps the real beauty of modern-day Sirenia is Veland’s willingness to serve both sides of Sirenia’s sound – the gnarly, progressive side, and the more commercial, radio-friendly side – with equal confidence.

Since Ailyn’s arrival – whether by coincidence or design – Veland has consistently been more and more adventurous in integrating a strong vein of electronica into Sirenia’s sound, and that too continues to be the case here; in fact, if anything it is more pronounced here than it was on the previous album. At times it is used as an atmospheric device, whilst occasionally it veers into outright industrial territory, as on ‘Insania’, where am icy electronic pulse flows through the track like a frozen river. Whilst Sirenia are hardly unique in this respect, their use of such instrumentation is effective, imaginative and never employed simply as a gimmick.

Vocally, Ailyn continues to go from strength to strength. The additional vocal coaching she underwent has paid enormous dividends, and she displays a confidence and ever-growing sense of the dynamics of Sirenia’s music. She turns in several of her best vocals for the band to date here, notably on ‘Earendel’, the powerful closing ballad ‘Tragedienne’, and her frankly sensational vocal on ‘The Silver Eye’, which is shatteringly powerful and a marked contrast with the vocals she contributed to The Enigma Of Life, prior to her vocal coaching. Perhaps most crucially, her pronunciation and general sense of the predominantly English lyrics is vastly improved; as with the previous record, there’s a greater sense of emotional investment in the material on her part, which is obviously of huge benefit to her performances. To her great credit, Ailyn has developed from an already striking singer into a versatile and charismatic performer, and should be proud of her continuing achievements.

Morten Veland clearly has issues. Chiefly concerning death and mortality, it would appear, but also with people. Veland’s writing is fairly consistently bleak, it has to be said. Fans will be reassured to hear that this tendency is unchanged on this album, with numerous songs engaged in these familiar topics – even lead single ‘Once My Light’ details a survivor’s desperate struggle with depression in the wake of their partner’s passing, whilst ‘Serpent’ sees the weary protagonist professing that “death awaits behind every door“. Like many writers before him, Veland seems to find his true inspiration from gazing into the void, and lamenting how terrible we can be to each other. Fans may have long since come to accept this, but seldom before has Veland come to so openly address his increasingly apparent misanthropy: “Life demoralize me / Won’t you all just leave me be?” he pleads in ‘Concealed Disdain’, whilst ‘Insania’ (not a Peter Andre cover, the listener will be relieved to discover) Veland admits “insanity consumes my mind“, and adopts a bleakly nihilistic stance: “As time passes by / We fade into the endless night / We can’t deny / We’re just mortals awaiting to die“. Pretty dark stuff, then, but Sirenia’s fans know what to expect, and Veland excels at putting the doomed romanticism into his songs. Penultimate track ‘The Silver Eye’ is perhaps the perfect distillation of this thing they call gothic metal, all forlorn, moonlit introspection albeit borne aloft on a bed of desperate heads-down riffing, and closer ‘Tragedienne’ sees Ailyn – playing the role of the titular “tragedienne, in sorrow eternally” – walking a freezing beach, lost in introspection: “Mesmerized and shivering / I came to understand / There’s something about the sea / The grave for a thousand men.” In Veland’s world, the world of the dead is never more than a whisper away, and that, perhaps, is its enduring appeal.

The Seventh Life Path, then, is Sirenia continuing to plough their own furrow. Those familiar with the band will know what to expect, although there are enough surprising flourishes and sonic experiments here to keep them guessing. After years of being their own worst enemies, however, it finally seems that Sirenia are ready to seize upon the early promise of their work and transcend the narrow appeal of a specific genre or sound. This is a beautifully wrought record – Veland’s meticulous studio work and attention to detail is to be marvelled at – but more importantly it feels vital; as on Perils Of The Deep Blue, here Veland and his band sound confident, reinvigorated. For all that the band have achieved on these most recent records, it’s hard to shake the feeling that the best is yet to come.