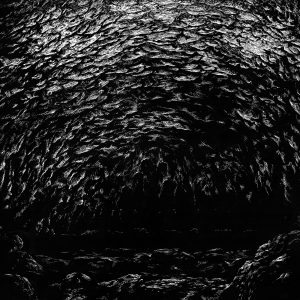 Thermal mud pools are bubbling, thick, puddles of ooze that with their slow, repeated, foul-smelling gurgles, make beautiful, ever-so-slowly changing patterns. They are mesmerising – the longer you stare at them, the more you see; concentric circles, interlocking hoops, shiny spheres, rings that seem to devolve into fractals.

All from mud and a bit of geothermal energy.

Which brings me to Ommadon, a duo of guitar (and noises) and drums, who make a simultaneously suffocating and epic noise that, the more you concentrate, creates spectacular images, as the resolutely geological riffs alter almost infinitesimally slowly over their 20-plus minute long doomy soundscapes.

It’s quite a feat.

This album, the Scottish pair’s sixth, has been mastered by none other than Billy Anderson – he of Sleep, Hellchild and Brothers of the Sonic Cloth – and features one song split into two parts, each surpassing 20 minutes. It is not quite as oppressive as their first album, although it does begin with a sound that is somewhere between industrial machinery and radio static. But once the low hum of feedback (a recurring, surprisingly comforting noise throughout the song) envelops you and the metronomic crash of low-tuned guitar and drums mark time, it soon becomes hypnotic, if foreboding. Then the riff proper kicks in, with some stunning drum work, and you find yourself somewhere subterranean, nodding your head interminably. From experience, the song is made even better when listened to somewhere wooded on a clear full moon night.

Sometime during the song (not sure when – time seems to bend with this band) the metronomic crashes return, signalling a subtle change which alters the mood somewhat. A churning guitar follows, before the drums come back, smashing out an apocalyptic pattern. Then, in what could be the soundtrack to a cargo ship docking, the first part of the song slows and fades and we are left with the low feedback hum. It’s dark, it’s heavy but at the same time it is soporific. And, it goes without saying, the slowdown, like that of a cargo ship, takes an age.

The hum fades back in for the second part of the song and it is here that we begin to see why Ommadon are known as a drone metal band. The first 23 minutes, with its relative riffery were a tease, it transpires; in the second part it becomes clear that these guys require (and reward) patience.

It swells and swirls like an alien ocean, with a machine-like dirge in the background for a very long time (again, exact measurements are impossible due to the time-moulding effects of the music) before something resembling a riff emerges and BANG! A snare-cymbal combo jerks the listener out of their trance, before a beat starts up to accompany the guitar, which by this time has slowly morphed into… well, something that makes your head nod sullenly. The final few minutes of the album are seen out by the guitar and various bleak electronic sounds washing over you.

It shouldn’t work. It is 45 minutes-plus of two people carving out enormous, low-frequency slabs of noise. But it does. And when it’s over, you feel as if you’ve experienced something supernatural; like you have seen things which you didn’t think you could see, all through your ears. Almost as if mud pools could make music. Fantastic.