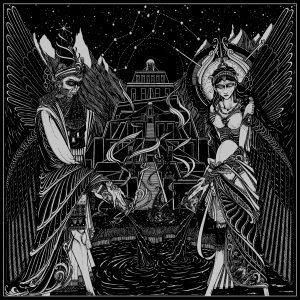 Released on April 27, 2015 via Candlelight Records

First, I want to apologize for not reviewing this album sooner. I feel like this is an album I should have been listening to since it came out! Ninkharsag’s newest album Blood of Celestial Kings is very poignant for the occultist black metal scene. It’s heavy, fast, and melodic with an emphasis on sharp sounding guitars and classic guttural black metal vocals. I reminds me a bit of San Francisco based Ludicra in some parts, with a faster speed and more emphasis on double bass drums and guitar parts.

The first song ‘The Sicarii’ is a powerful way to start you off on the album. It’s melodically depressive, but has an old-school black metal feel to it. The first thing I noticed is that the recording is done very well. The drums are on point, the vocals are just ahead of the roaring guitars, and the quality comes through. The guitars take you for a whirlwind of bleak emotion, with an almost d-beat in the background. It quickly became my favorite song on the album, as I went back to listen to it several times.

The album continues to throw intense songs that each have their unique style – breakdowns, different guitar melodies, crazy different drum beats (including some spot-on double bass drum action). Each song delivers and is different from one another. I appreciate black metal albums that have songs that are different from each other and know how to evoke different emotions from song to song.

Their self-titled song, ‘Ninkharsag’ has a pretty epic acoustic guitar breakdown. It’s beautiful and features a background of bass guitar, which is a unique sound. They quickly go into rip-roaring old-school black metal, with lyrics speaking of Ancient Goddesses and such. A great way to break up the album and give it a different feel. It also shows their Ancient occultist theme.

With speed, old-school melodic black metal, classic vocals, and intense drums, you will not be disappointed in this album. Black metal fans everywhere should check it out.

Blood of the Celestial Kings came out in April 2015 by Candlelight Records.