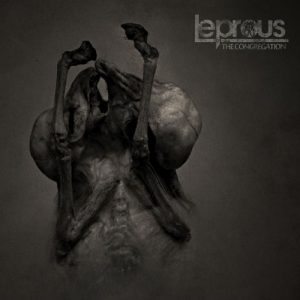 Norwegians Leprous are one of the veteran acts on the forefront of what many consider to be a new wave of progressive metal. This new wave of bands eschew the sometimes overwrought tendencies of the wave of 90s prog metal bands and their emphasis on showboating technical soloing, and plough a more thoughtful, introspective furrow whilst retaining the crunch the genre demands. Leprous were one of the first bands to give the nascent new wave of progressive metal a defining sound. Their third and most recent album, Coal, was a tour-de-force, a genuinely thrilling and intense roller coaster ride of fast and furious syncopated riffery and soulful balladry that cemented their position at the prog metal high table.

The Congregation is the band’s fourth full-length record and in some ways it’s business as usual: as on Coal, Leprous display a truly formidable skill with syncopated rhythms – in that respect this has to be one of the most terrifyingly proficient records you’ll ever hear. Their unerring ability to nail every quarter (or sixteenth) beat is positively awe-inspiring, and their dazzling skill in this area is showcased all over the record. The opening track, ‘The Price’, kicks off with a stuttering, mesmerising groove, and even that astonishing demonstration of their ability to screech to a halt and race off at 90 degree angles pales into insignificance next to tracks like ‘Third Law’ and ‘Moon’, where their technical prowess is given free reign. Yet no matter how technical their musical pyrotechnics become, they never succumb to the lure of the ego-stroking solo setpiece: their tendency is to act in uncanny unison, dropping jaws with the intricacy of their performances rather than by handing control to individual players. These instrumental passages are truly breathtaking: mesmerising, euphoric, and yet at times crushingly claustrophobic.

‘The Price’ sets a definite tone for the rest of the album. In many ways it’s the ultimate taster track for Leprous’ sound: tricked-out syncopated riffing; subdued, introspective verses shot through with a uniquely Scandinavian yearning; and a blistering chorus which lifts the track into the aurora-dappled heavens. Masterful as Coal was, however, there is plenty of evidence here that the band continue to up their game. What’s clear even two or three tracks into the record is just how much vocalist Einar Solberg has raised his game: he was phenomenal on Coal, but here he is positively incandescent. For all that, there will undoubtedly be some raised eyebrows among the hardcore metal fans who will observe that Solberg turns in less harsh vocals than previously. The plain fact is, he doesn’t need to: his vocals are always deployed with an unerring understanding of what is required and when – like the other band members, he provides exactly what is needed, exactly when it is needed, and his economy is welcome and reassuring in its confidence. When he does unleash the full power of his voice, it’s as effective and stirring as ever, notably in the whirling maelstrom at the centre of ‘Rewind’, which is as powerfully brutal as Leprous have ever been. It’s almost impossible to sit still in the face of the band’s withering assault, and by the end of the track the listener will most likely feel like they’ve been run over by a combine harvester.

It’s also clear that line-up changes have not had any major impact on the band’s sound. It seems churlish to describe Baard Kolstad as the band’s new drummer, since he has already toured extensively with the band in support of their previous album. The Congregation marks his studio debut, however, and he is little short of phenomenal throughout, often lending the material a ferocious momentum that recalls the best of previous drummer Tobias Ørnes Andersen’s work. Whilst ostensibly still a session player, bassist Simen Daniel Børven acquits himself extremely well too, providing colour and fluidity whilst still managing to keep pace with the lightning syncopated passages without apparently breaking a sweat. This new blood has, if anything, spurred the band on to deliver some of its best instrumental work.

Solberg’s keyboards, as ever, provide a crucial element, and if anything there is a slightly more pronounced use of keyboards and elements of electronica in the band’s sound this time around. If anything, it serves to make their music sound more epic than ever: this is especially marked on the dynamic ‘The Flood’ (the longest track here) and ‘Red’. They also play a key role in the dramatic ‘Slave’, the album’s huge, tragic ballad – Leprous have never sounded more akin to fellow countrymen Gazpacho than here, and Solberg’s impassioned vocal shares much in sound and feel to the vocals of Gazpacho’s Jan Henrik Ohme. The song is never allowed to become a pastiche, however, its mid-section crammed with a cavalry charge of guitars led by some of Solberg’s hardest-hitting harsh vocals. At the end of the otherwise restrained ‘Red’, the band employ a similar trick by abruptly disposing of the established structure of the song and introducing a frantic explosion of syncopated insanity that steadily dials up the intensity before a sudden halt that will snap your neck back. The quiet/loud/quiet dynamic is an old trick, but Leprous wield it like magicians: even when you can sense the approach of a lurching riff or thunderous drum roll, when it arrives it can still take your breath away, like a freezing cold wave on a hot summer day.

The general impression here is of a transitional record: The Congregation feels very much like a consolidation of the rich vein of quality and strong musical identity the band hit upon with Coal, but also like a jumping-off point to a new sonic destination. The slightly greater emphasis of the electronic element of their sound is intriguing, and if the band can marry it to the full-tilt riffery they have so plainly mastered, they may well take their sound somewhere utterly new, which is a thrilling proposition. With most of the tracks here clocking in around the six or seven minute mark, and crammed with startling about-turns and unexpected arrangements, the band’s progressive tendencies are given free rein, which is very welcome as they are simply so good at flexing their muscles in this way. The album is lengthy, clocking in at 65 minutes (70 minutes if you’ve had the excellent sense to snap up the mediabook CD edition or double LP with extra track), but never overstays its welcome; it’s also a very polished and slick-sounding affair, but it’s not so slick that it has had the life polished out of it.

The Congregation is a remarkable album that cements Leprous’ enviable reputation, and showcases a band whose confidence, and willingness to explore and develop their sound, grows with every trip to the studio. Anyone who might have imagined that the band had provided their definitive release with Coal may wish to reconsider; on this evidence, that’s still some way in the future for this astonishingly inventive band.