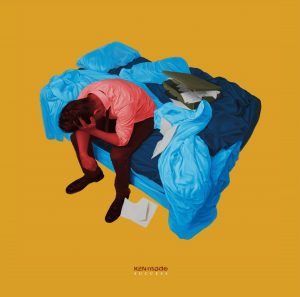 Having witnessed KEN mode live twice in as many years, and having heard a couple new songs live, I was eager to see what their next move would be. I was a huge fan of their previous record (2013’s Entrench, which was produced by Matt Bayles) and when Succes was announced I was excited and also apprehensive to hear the results.

Behind the desk this time is none other than Steve Albini and straight off the bat you can hear his influence, gone are the big slabs of distorted metallic guitars and chaotic arrangements, instead in their place there are very precise, very well-structured pieces of noise rock (with exception of ‘I Just Liked Fire’, which is 2 minutes of hardcore fury).

The album opener ‘Blessed’ starts will squealing feedback and then enters a huge riff to kick the album off as you might expect from KEN mode. The riff doesn’t last for long though and it’s left up to the bass and drums to carry most of the song, whilst the vocals are spat at the listener over the top of it all. This method is repeated for large portions of the album, which is not necessarily a bad thing as the rhythm section are incredible, giving vocalist/ guitarist Jessie freedom and space to deliver his cynical world view with venomous style.

There are moments on here that are really great, taking influence from bands and peers of Albini’s (The Jesus Lizard, Nirvana, Flipper, Big Black, Shellac). The second half of the album is stronger than the first from fifth track, and my highlight, ‘Management Control’ through to album closer ‘Dead Actors’. The songs are, in my opinion, more focused and flow better compared to the rather disjoined first half.

This is a very bold record for KEN mode to make given how well received their last one was, both in their native Canada and also further a field, one which sees them leave their metal leanings behind them in search of something a little more diverse and interesting. Success may alienate some fans of their previous records, but if this is a statement of intent, I’m not sure that will worry this power trio in the slightest.