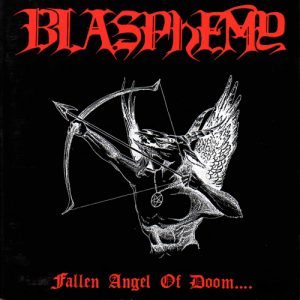 Way back in 1990 I used to while away my time listening to Pop Will Eat Itself, Jane’s Addiction and the final throes of The Ramones. My only window into heavy music was through a friend of my brother’s named Colin, who would delight in sneaking into our house (not nearly as creepy as it sounds) and waking us up with the likes of Slayer’s Reign in Blood at ear-damaging volume.

The odds are high he’d have had Blasphemy‘s savage début, Fallen Angel of Doom…. when it first came out in 1990. If he didn’t, it wouldn’t have been through any lack of trying.

Because this, apparently a massive influence on black metal as we know it, is nothing like anything that was around back then. Sure, Seasons in the Abyss from Slayer and Cannibal Corpse’s Eaten Back to Life were both released that year, but compared to Fallen Angel…, they sound like the Backstreet Boys – whose biggest album was also released then, in case you are wondering.

And anybody who bought this album in the year of its spawning would have spent the next couple of decades disappointed that very little surpasses it in terms of sheer evilness or heaviness, not to mention scary amateurism. In this cosseted 21st century bubble we live in, Fallen Angel… sounds more like a demo tape from a death metal band that can’t play very well, rather than what we’ve come to call black metal.

It’s full of blast beats, death roars (and plain angry ones), skin-shredding, all-fingers-and-thumbs guitar solos – the sort that you’d thrash out when handed a Flying V and a Marshall stack if you couldn’t play a note – and also boasts the occasional neck-wrecking, riff-filled breakdown. And it all sounds as if it was recorded in a brimstone cave. By a person with no knowledge of how music is supposed to sound.

There is nothing to be gained by looking deeply at each song – they are uniformly offensive. I swear that sometimes the vocalist actually utters “yuck”. Or at least “yeuurgh”.

So why are we reviewing it now? By rights, this album should have been locked up: it’s raw, it’s angry (about something, although song titles like ‘Hoarding of Evil Vengeance’, ‘Desecration’ and ‘Weltering in Blood’ suggest their fury wasn’t focused) and at times it sounds bloody awful.

But for all that, it’s awesome. And apart from anything else, it served as a huge influence on metalheads of an extreme persuasion, so it deserves to be heard by anyone too sheltered or young to have enjoyed – no, that’s the wrong word – experienced it the first time around. Yes, this album may have given rise to the occasional guitar-wielding pyromaniac, but then again, once upon a time Elvis Presley was accused of corrupting minds.

And, in this age of post, blackened, doomed, math, god-knows-what metal, it’s good to hear a source of all that music which is just plain furious. And now that it’s being re-released, on vinyl, CD and cassette, on a label headed by R Förster of fellow Canadian black metal merchants Conqueror, you have no excuse not to hear this relic.

Put it this way: despite (or maybe because of) its teenage anger and sonic limitations, I can’t stop listening to it. Wish I’d heard it in 1990.