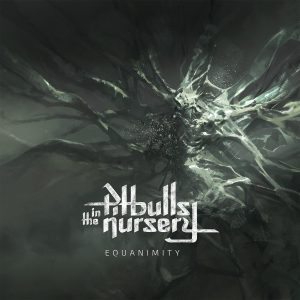 Released on May 4, 2015 via Klonosphere Records

True story: Pantera once saved an acquaintance of mine from a bleeding nose.

OK, perhaps I’m using a little poetic licence. But Pantera’s third “proper” album (excluding their early party-metal phase) Far Beyond Driven did in fact save me from punching my acquaintance in the face.

It was years ago, back when record shops still had listening booths. I was in a mall with the man in question, who was doing my head in to the extent that I escaped to a branch of Tower (yep, it was that long ago) on the pretence of needing the toilet. The Pantera album was on display. I picked up the headphones. It took no more than a couple of minutes of the furious rage of the first song, ‘Strength Beyond Strength’ before my anger had dissipated.

What does my catharsis involving an utter bonehead and Pantera have to do with this album from Pitbulls in the Nursery, an outfit from the outskirts of Paris, I hear you ask?

Mainly that the opening bars of ‘Crawling’, the first song on Equanimity, are as cleansing, mood-changing and downright metal as anything Anselmo and co ever produced. And, as far as I can hear, minus the misogyny. Sure, the band’s name is questionable, but the music makes up for it. And what is even better is that the double-kick drumming and frantic guitar work that hit you from the beginning of ‘Crawling’ is a tiny fraction of what this album offers.

Yes, it’s loud and aggressive enough to channel the most white-hot anger, but there are enough nuances and technical flourishes to make it far more than mere noise to accompany rage.

And despite the band – back after a nine-year hiatus during which their label went bankrupt and they changed vocalist – billing themselves as carrying some progressive influences, there is no discernible navel-gazing to be heard. They have the balance of visceral energy and technical prowess just right. They also profess to having a sitar in the mix, but I can’t hear it amid the din. Take the opener; in its nine-minute duration we get pure death, a bit of groove in the vein of Pitbulls in the Nursery’s compatriots Gojira and a few Meshuggah-like angular rhythm changes. And it all fits seamlessly.

Then there is ‘Rule the Plight’, with its thumping riff topped off with an added trill of guitar, which makes for a perfect metal song. Again, subtle time changes keep it interesting. ‘The Oath’ does have a proggy interlude, but still demonstrates powerfully the importance of having moments of complete silence in a riff. As does ‘Reality’, which has more Gojira style touches.

After the instrumental ‘Interlude’, ‘Insiders’ screams at you with another avalanche of drums, which morph and twist into an impossible groove. ‘Conspiracy’ follows and its melody provides a slight breather, although the technical ending sounds exactly how you’d like chucking your toys out of the pram to sound. The  dub passages of ‘Soulbones’, however, bring to mind Soulfly, if they were fronted by an angry Frenchman, instead of a dreaded Brazilian.

They save the most monumental for last, with the ten-minute epic called ‘Your Dream’s not Mine’. It starts quietly and menacingly, with vocalist Tersim Backle whispering “How do you feel?” Then after some super-tight and bewildering time changes, a shuddering riff looms to close it out. By the time the crashing, huge riff arrives, with its soaring guitar solo, your anger is gone.

This album clearly took some dedication to finish. Apart from the time scale and their label going belly-up, the band had to crowd-fund its way into existence. It’s worth the wait and it will be an injustice if it is not heard by discerning metal-heads the world over: in fact it is essential for anyone who feels the need to punch a person on the nose. With this album, you needn’t resort to violence, because, like the title suggests, one listen will bring a state of equanimity.