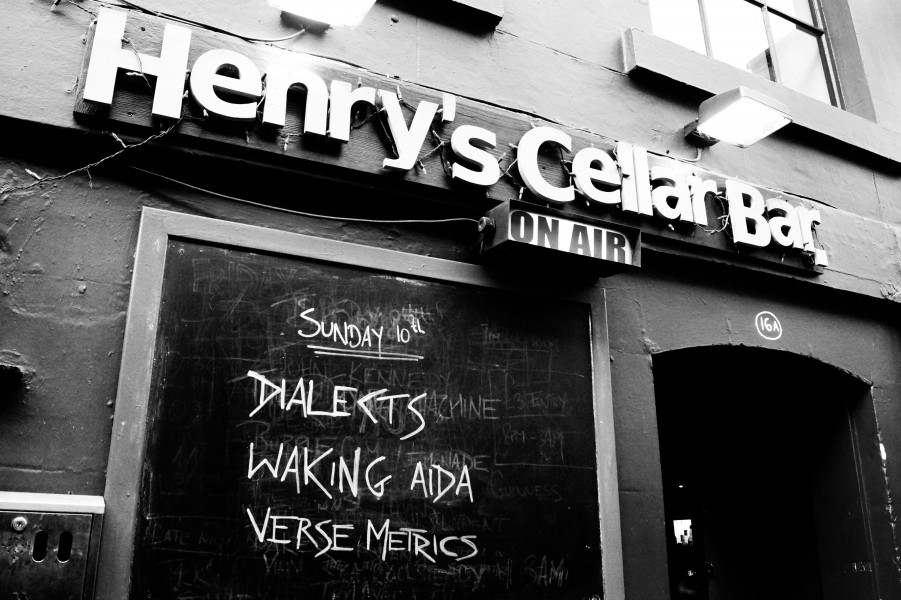 This is going to be interesting. Henry’s is tiny, a tight little gig space at the back of a…well, a bar in a cellar. Any more than, say, 20 people and the crowd spills back into the drinking space, in amongst the handful of tables. And tonight we have Dialects, Glaswegian math-rockers who are not averse to throwing themselves around a bit. They’re here to promote their new record Let The Kids Light These Lanterns, released yesterday May 11th.

So, let’s push on up to the front and see what happens. This could get bumpy.

Well, as we shall see, it doesn’t. And it kind of does.

Anyway, the advertised ‘TBA’ don’t turn up, leaving the duty of ‘Opening Act’ to Glasgow’s Verse Metrics in their occasional 2-man almost-unplugged form. Which is nice.

I really like Bob and Al’s stripped back post-indie1 re-imaginings, because it really lets us hear what a good singer Bob is. We get a handful of Verse Metrics standards – ‘Aches’, ‘Logarithms’, that kind of thing, and a lovely take on Interpol’s ‘Obstacle 1’ – all re-worked for Bob’s acoustic and Al’s delicate, windswept, post-rocky electric guitar. Puts me in mind of fellow Scots Twilight Sad when they do their own unplugged thing.

There’s a bit of a giggle when new-ish song ‘Interlocator’ stumbles to a ragged halt. Bob explains, ‘We haven’t written a proper ending for it yet, so…’ But it’s fine, we don’t mind. 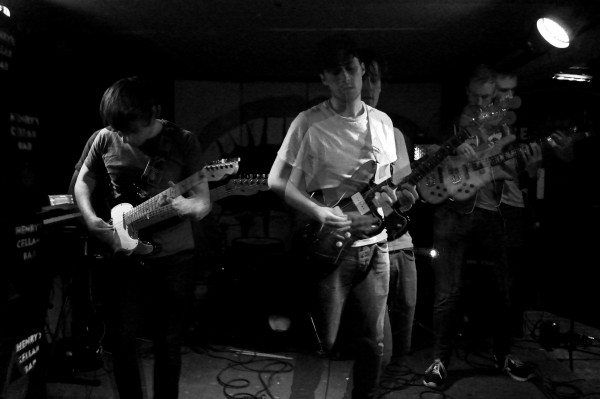 I feel a little sorry for touring support, Waking Aida. They’ve come a long way from Southampton to play in front of a meagre handful of paying customers, the other bands and the venue staff2. Still, despite that, they give it their all, and they’re a huge bundle of fun. I admit right away that I’m not overly familiar with their repertoire, but tonight’s set seems mostly derived from their Eschaton album3. Leaving aside song titles, they give us half an hour of gloriously summery mathy post-rock. They fill the tiny room with the sound of undiluted sunshine, really they do. There’s a hint of the Calypso about their music, or maybe of those African bands that John Peel often played and whose names I can’t remember. The sparkling guitars and piano. The bubbly bass. It’s simply joyful. The guitarist who doesn’t also play piano gyrates and contorts like some kind of rubbery thing, as often off the stage as on it. In a busier room, he could have been a health hazard. 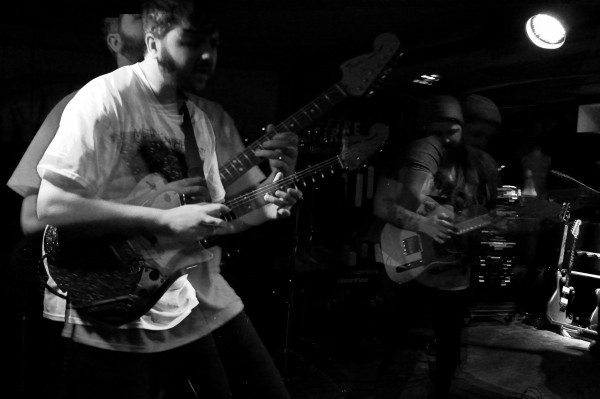 And then Dialects. Ferocious math-rock from Glasgow. Jesus, they’re fierce. Four – and I hope they don’t mind me saying this – burly bearded gents playing in Edinburgh on the final day of a tour promoting their new record LTKLTL4. They absolutely batter through ‘Restless Earth’ and ‘Unknown Orbit’ from that EP without, somehow, exploding. Think, if you will, And So I Watch You From Afar on steroids and less dull5.Connor and Steven on guitars thrash and flail, Ali on bass stands out front like a wall of tattooed meat, and Jonny holds up the rear hidden behind his drums and his colossal beard. Breathtaking stuff.

There’s a couple of new songs next, both of which show off Dialects’ more chilled side. Not exactly ambient, but looser, slightly less frenetic6. Just as good, though.

Back to the EP and the aural battery with ‘Spectacular Supernovae’ and then a closing  brace of ‘Let The Kids’ and ‘Mountainous’ leaves us, the minuscule audience, shattered and grinning, and Steven, the guitarist, lying amongst a tumbled ruin of a drum kit. Bugger me, that was fun.

Yes. It WAS fun. But it could have been so much more. All the bands gave it everything, playing as if they were in front of a room packed with supporters. Which is fine, it’s the right thing to do. But, damn, it must be hard doing it in a ¾ empty room. At least the few paying punters, myself included, enjoyed the gig. Enormously. We can’t complain and I, for one, want to thank Waking Aida, Dialects, and all of the other bands who keep on playing to nobody in venues up and down the country every day. Please don’t ever stop.