So, Desertfest happened again… we came, we saw, fell over, lost our wallets, whitied, threw up, pissed in the canal and spent all our money. We think there was something else too? Oh yeah, a fine collection of some of the devastating bands on the planet. Read on as our man Richard Collins tries to remember what the fuck happened.

I expected to stroll in 1 or 2 minutes late and get a nice little spot in the Black Heart for this rather brutal Brighton/London based outfit. I was wrong, it was rammed and there was a queue and I had to squeeze through the beers and beards with every ounce of my strength just to get a decent view. It was worth it though, a thunderous display of doom fused with hardcore punk that got us all right in the fucking mood. Nats, the front woman, was fucking vicious and there was a very special atmosphere considering they were the first band on. The temperature in the Black Heart reached about 83°C, and that’s where it stayed… all weekend.

I’d never heard of these chaps and by God they were bleak. A punishing assault of paralysing smashes that went on no journey whatsoever… I cried. Nice!

These pissed off sludgers were a very last minute addition, which is great because I had not seen them for fucking ages. They were fucking disgusting, about as pissed off as you can get via pounding miserablism. The front man, Jake, looked like he’d been dug up from his grave to give everyone a massive bollocking. The crowd smashed into each other, beers went everywhere…really fucking awesome.

I fucking love Floor, they have that down-tuned chugging sound nailed to a fucking tee. They delivered and to say it was heavy would be an understatement. Couldn’t help feel it would have worked better in the Underworld though, those kinds of riffs need to be right up in your fucking face.

I saw these guys at the first Desertfest and was completely blown away – this time was no fucking different and then some. How this 2 piece sound like such a violent riff hurricane on top of a mountain, I have absolutely no idea! The vocals were vicious, the crowd were crazy and it couldn’t even be spoilt by the little idiot trying to start a fight in the moshpit – you know who you are!

We all get patches in festivals which we can’t account for, where we’ve pushed ourselves a little hard and we’ve got no idea what fucking happened. Sadly, this was the case for me and Galvano. Don’t get me wrong, I had a great time, I was down the front bobbing my head and pumping my fist like the universe’s existence depended on it, but as for what happened or what they sounded like? No fucking clue.

I had managed to get half a grip on reality and was semi-aware of my surroundings by the time Noothgrush descended upon the Underworld. They had tech problems at the beginning, which wasn’t ideal, but after a lengthy break they launched a sludgy attack and gave us a right good kicking. It was loud, long, and downright horrific. Their front man is a seriously intense performer and I’d be surprised if anyone didn’t go home and have life-destroying nightmares.

Getting out of bed and getting to the Underworld for 1pm was no easy fucking feat, but I heard this new project featuring members of Part Chimp, Dethscalator and Mugstar was not to be missed, so I fucking did it. They were amazing, pumping out this very odd kraut drone with crazy sax all over the place, like Drunk In Hell in a fucked washing machine. I was hooked and there was a seriously nice vibe in a busy Underworld, which is impressive when you consider the early start time. After the final loop faded, I remember thinking “that’s my favourite band of all time”, but I was hungover and having daft thoughts. Still fucking great though.

Palehorse are a bunch of pissed off individuals with 2 basses, no guitars, a guy doing noise, drummers and a front man bursting with frightening energy. I’ve seen them a few times, but never quite this spiteful. You can tell they’ve been together for over a decade as they are worked together seamlessly to create an unspeakable blast, which just fucking winded me. The front man, Nikolai charged around the Underworld’s stage going fucking nuts, like he had to tell us something important before it was too late. I don’t know what about… drugs?

The Black Heart was packed out for these Dalston-based heavy rock titans. They’ve been getting a lot of attention recently for their insanely delicious Badguynaecology album and stupidly enjoyable ‘Prostitutes’ video. Believe the hype, they effortlessly throw out all kinds of heroic riffs on their ludicrous double neck guitars whilst the front man Stu menacingly spat his nonsense. Not an un-pumped fist in the house, the real fucking deal.

There was a fair amount of confusion in the air as this weird noise project started setting up their shit on the floor in the middle of the Underworld. One guy on drums, two guys fiddling with dozens of pedals and nobody really knowing if they had started or not… Sly and the Family Drone are hardly Orange Goblin, but I’d take this any day – entertainment on a whole new level. They somehow channel the weird noises that are being spurted out from all over the shop into something with real power. As per usual, they hand drums out to the crowd who participate in making the incredibly extraordinary vibe that this band conjure every time they play. Knob twiddler Matt Cargill got into his pants and surfed on a Martial stack like a tubby Spiderman whilst Nikolai from Palehorse grabbed a mic and went fucking nuts. It was history, not rock history…. HISTORY!

The first time I saw this band they played noise rock and had about 8 drummers. Now, here they are with just one drummer hitting one drum and two guys hidden by wigs hunched over all kinds of gizmos playing this dark techno music. It was just fucking weird, there was something oddly inviting about it though and made my brain warp and my mouth smile. The crowd could have probably done with being in a field holding a big fat pill in their bellies.

Anthroprophh are three seriously talented guys in their 40s who are hell bent on finding new ways on creating hypnotic rhythms that will chuck your brain in all manner of directions. It’s truly joyous watching them at work, a wonderful psychedelic episode that mashes your thoughts into a pathetic muddle. To finish, bassist Gareth got out his futuristic double bass and they mad this tantalising kraut noise, which morphed their set into a sonic miracle. They know exactly what they are doing. Class!

Bong switch on their gear and it makes this noise which just picks up from last time you saw them and you zone into it like a deranged moron. It’s a special consciousness, like when you and your mate do mushrooms together and you are thinking the same thoughts. Playing as a three piece, they hurled into ‘Time Regained’ from the new album, which was simply magnificent. The whole set was like some celestial spell and they played at quite a speed in some places (for Bong). The atmosphere was gripping and one thing became clear… Bong are an evolving entity, which is being controlled by forces out there in the Universe, which are far too wonderful to ever be comprehended by mankind.

What a run in of doom that was laid out for us in Koko on the last day – it was like the world cup final of all things loud and weedy and down-tuned. The first band that graced the stage by the time we arrived was San Francisco’s Acid King. There was a certain radiance about the performance, the riffs are fuzzy, spacey and the 1000+ hungover crowd were powerless other than to float away, enhanced by the addictive interplanetary visuals. Nothing too challenging or scary, just a comfortable trip across parts of the universe I had never seen before.

This Italian 3-piece are in the form of their life after the recent release of their scarily impressive new album Ecate. The stage was set, the screen came down, magic starts flying around Koko and then ouch… they stop due to technical difficulties. The disruption seemed to go on forever, which is really unfortunate as they are a band that is all about the drama. However, eventually they manage to sort it out and HOLY FUCKING FUCK… they create cosmic eruptions of riffs, synths, chants and retina destroying visuals that made me worry the planet was in trouble and we were being sucked into an acid filled black hole. EPIC!

The anticipation for Sleep was massive, they got announced about a year ago and I think I heard the word “Sleep” about 3.2 trillion times throughout the festival. Could they deliver? Course they could. They hit the stage and the atmosphere was fucking electric, before not fucking about in the slightest and tearing straight into Dopesmoker, which feels like a relic of heaviness that was recorded 1000s of years ago. Sleep have absolutely amazing riffs, a euphoric stage presence and seeing them live is always a special experience. Headlining Desertfest was another extraordinary chapter for a timeless band who will ring throughout the ages. Absolutely staggering! 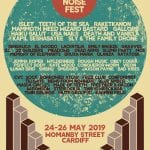 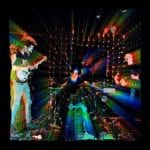