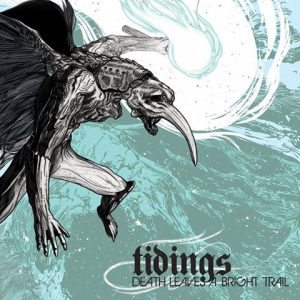 See, I’m in a tricky position regarding TIDINGS. I know them well. I’ve seen them live more often than seems reasonable for a man of my age. I was there for their first ever gig, back when they weren’t called TIDINGS. I was there for their triumphant set at StrangeForms last year. I’ve helped them out. I’ve plugged them remorselessly. They even added me to the ‘Thanks’ list on their first record.

How then, you ask, can I review their new record objectively?

Well, fuck it. You can stick objectivity where the Sun don’t shine. This album is immense.

We have here three (or maybe four) slow-burning chunks of the finest, heftiest post-rock you could ever wish to find.

Opener ‘On His Wings Hung Regret And Remorse’ pretty much sets the scene for the whole album. Patient. In no hurry to get to the punchline. Delicate guitar – that’ll be Thom – and new boy Henry’s swooping bass draw you in gently, in the classic TIDINGS style. You hardly notice the sound swelling until it bursts, big Gordon pummelling the drums and Santi entering full on Rock Star mode1 on the other guitar. Then it goes away, starts again with a grumbly bass and drums bit, then builds and builds to the final riffgasm.

Trying to be objective, I have to admit it’s a fairly standard post-rock formula – quiet, loud, quiet, loud, louder, VERY LOUD – but TIDINGS use that formula to kick the collective arse of most of the competition. Kick it hard.

(I’m trying to think of some other bands I can compare TIDINGS with, for those who don’t know them. Maybe an amalgamation of the post-rock of If These Trees Could Talk and the harder edge of What The Blood Revealed, or a less boring Pelican or Russian Circles without the dull bits. Yeah. Something like that. A bit.)

The centrepiece of the album, the 15 minute two part monster ‘The Bone Orchard’, will be familiar to anyone who has seen TIDINGS play in the last year or so2. It has been tweaked, honed, re-thought and re-worked on stage and now it’s a fucking3 BEAST of a song. Maybe it doesn’t quite capture the raw ferocity of the live version, but that’s fine. Now it reveals all of its subtlety, its elegance and its sheer epic majesty. This is TIDINGS purified and distilled, triple filtered like the finest vodka. Like, about a minute in, there’s a plaintive, crying guitar I’ve never noticed before, and it’s stunning.

It’s a masterpiece, really. Alternately uplifting and punishing. Relaxing and exhilarating, all the way from the intro of ‘Part l – Across The Plains’ to the languid, sleepy outro of ‘Part ll – At The Gates’.

(A quick word about titles and stuff… There is, apparently, a loose concept to the album, but it’s not something you need to be aware of to enhance your enjoyment to the music. The titles, despite appearances, have no great meaning or significance, other than as a ‘narrative cues’ to interpret as you wish. Or not. Whatever.)

Closer ‘Mighty Fallen’ is, perhaps, the most straightforward – and least TIDINGsy – song on the album, but it still frog-marches most modern post-rock to the exit and leaves it standing forlornly on the pavement in the rain. That bit in the middle, from about the 5:00 mark, is just lovely. I won’t describe it. You’ll have to listen for yourself.

OK, I realise that I am slightly biased here but, seriously, TIDINGS are awesome. But they were awesome before they were my friends, and me knowing them well doesn’t change that. They’d still be awesome if they had never met me, but obviously not as cool.

Death Leaves a Bright Trail is pure class. 35 minutes isn’t enough, though. I want more. Please, if you are any kind of fan of post-rock and post-metal, go to Bandcamp and listen to all of their music. Maybe even buy some, if the fancy takes you. Go see them live if you can4. Bands like TIDINGS need your support. They’ve already got mine. 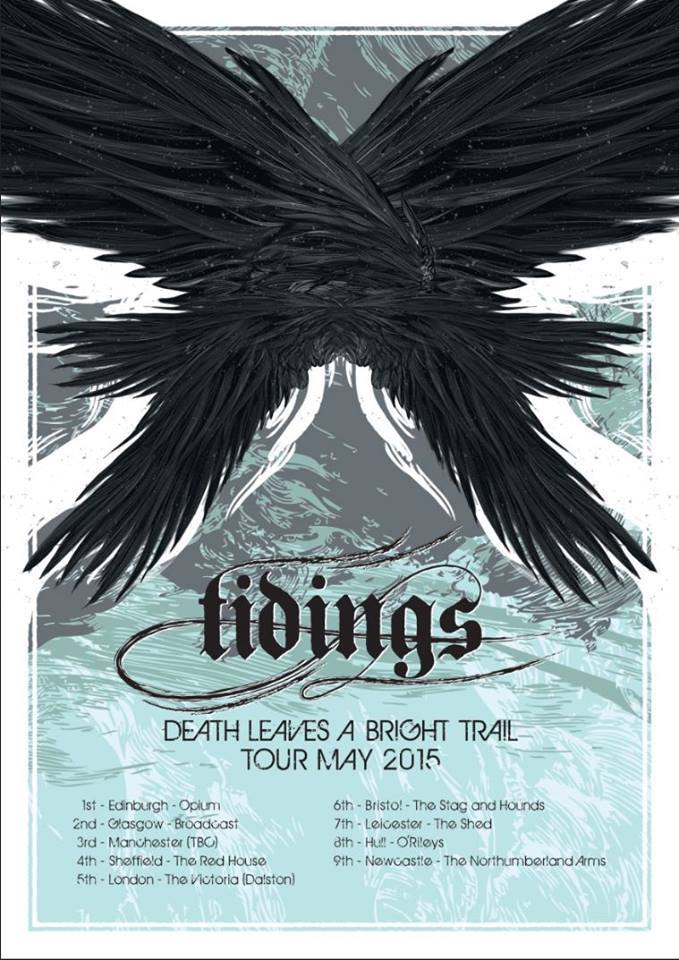