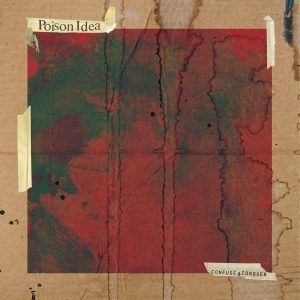 It’s nice to know that bands like Poison Idea exist. There’s no pretensions with them, just straight up, noisy punk rock. Listening to Confuse & Conquer, it occurs to me that the album could have been released at literally any point in the last 30 years, following the tried and tested formula of pounded drums, shouted vocals and speed. There’s a slightly self-indulgent Southern rock/cowboy theme to be had, but by and large it’s all 4/4 timing and a perfunctory number of power chords.

In some ways it’s difficult to review a hardcore record, because they all sound the same. Purists may argue with me, as is their right, but I argue that the *sound* of the album is, to some extent, besides the point. What we want from hardcore is passion and aggression, and with Poison Idea this is exactly what we get. All I need is for Sick Of It All and Agnostic Front to release new work, and it’ll be just like 1998 all over again, and wouldn’t that be splendid?

If Confuse & Conquer does vary from the tried and true slightly, it’s in the more southern groove sound that Poison Idea are now exploring. Think Pantera at their grooviest, or Clutch at their fastest. This album coming out on Southern Lord seems to be a perfect fit for them.

Of course, it being hardcore, the real proof of the pudding is in the live performance, which we in Britain will be lucky enough to be able to catch in May. Look carefully and you may see a fat guy in NHS glasses pogoing down the front. If you do, offer me a pint of cider. I’m nothing if not a traditionalist.