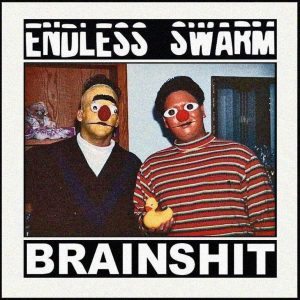 It seems that every year, there are a handful of obscure grindcore or powerviolence bands who make it their mission to just come up with the most ridiculous splits around. It seems to be a running joke, or maybe it’s just me. It is time again for one of these splits and this time it’s Edinburgh powerviolence cretins Endless Swarm and their partners in crime Brainshit, whom are also based in the United Kingdom.

Moving along swiftly we get into the nitty gritty with the Brainshit side of the split and what is there to say? It’s fast, harsh, abrassive and over before you can say “what the fuck was that?”. I had it on repeat so I could gauge the soundscape of their music and realized that it’s a clusterfuck of noise and speed pretending to be grindcore, but it has some elements of hardcore, which is ever present, especially in some of the riffs. The sound can basically be described as a product of locking a bunch of idiots in a recording studio together and just giving them free range to do whatever. It’s absolutely brilliant!

The other side of the split countains the Endless Swarm part of the matter, which in many cases leans itself more towards the powerviolence side of things, with slower, more intense riffs and rhythms, which reminds me a lot of Man is the Bastard and then of course the double vocal style that interchange, as you do in powerviolence. They have their own take on powerviolence, which is refreshing. So many bands try and just sound the same as the ones who came before. This side of the split has a bit more structure, but that’s as far as it goes. In my honest opinion the Endless Swarm side are an incredible couple of tracks!

As far as the split goes as a whole, I couldn’t think of a more appropriate combination for either of these bands in terms of doing a split! It’s going take something special to change my mind, but yeah as far as splits go this year, this one is high on my list! The album art itself is the best I’ve seen for a while and just based on that this would be the winner. This is an incredible split by two awesome bands.