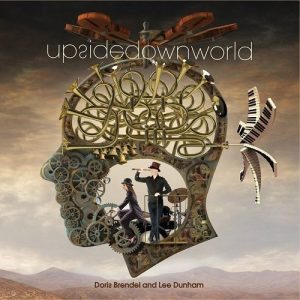 Back in 1991, fans who went along to see legendary British progressive rockers Marillion received an unexpected treat: a curious and intriguing support band named The Violet Hour. Long before progressive rock became a truly dirty word to A&R men across the country, The Violet Hour had managed to bag themselves a deal with Sony and had produced a fine debut album, The Fire Sermon. For a rock band with some progressive tendencies, a Marillion support slot was a big deal, and things were looking very promising indeed for the fledgling band.

However, whilst a deal with Sony and an excellent debut album were nothing to sniff at, what really set The Violet Hour apart was that they were a band with progressive tendencies who were fronted by vocalist Doris Brendel. This was some time before the explosion in women fronting progressive rock bands that were an undeniable feature of the early 2000s, when bands like Karnataka, Mostly Autumn and Magenta blazed a trail for numerous other bands to follow their lead, as bands realised that the female voice introduced an intriguing new dimension to their music. Of course, in itself this was nothing new, with bands like Curved Air, Renaissance and Solstice having reaped the benefits of having powerful frontwomen bring their own special magic to their music – but in 1991, The Violet Hour were an outlier of sorts. Taking their inspiration from these bands, from contemporary bands like All About Eve, and from the mid-80s explosion of so-called neo-prog bands like IQ and – yes – Marillion, The Violet Hour welded a progressive sensibility to sturdy folk-influenced rock to great effect. Brendel herself made for a magnetically charismatic focal point: an elfin figure whose slight frame produced an enormously powerful, rasping rock voice – that even back then was being freely compared with Janis Joplin – she wielded guitar and flute by turns through the band’s all-too-brief support slots. The Violet Hour were a palpable hit, and to this day they are fondly remembered by Marillion fans who went along to the UK shows on that tour.

Alas, The Violet Hour were cheated of their seat in rock’n’roll Valhalla. The band fractured – Brendel had been a late addition to the line-up, and artistically she and her bandmates were on very different musical pages – and Sony dropped them. At that point the writing was on the wall and the band went their separate ways. Brendel appeared to fall off the radar after an acoustic tour with her own material, making ends meet with guest appearances and lengthy stints in cover bands, whilst continuing to write, both on her own and with a roster of trusted collaborators. Finally, in 2010, she re-emerged with her first record in several years, the almost wilfully eclectic The Last Adventure. It’s completion appeared to give her new confidence, and it wasn’t long before another album appeared, this time co-written with collaborator Lee Dunham.  This record, Not Utopia, released in 2012, was further evidence that Brendel’s muse – and her formidable voice – was alive and well.

The ease with which the duo worked together and bounced ideas off each other led to a continued collaboration, and Upside Down World is the second album produced by Brendel and Dunham working together. Like its predecessor, and Brendel’s own The Last Adventure, it is deliberately and wilfully eclectic, a veritable patchwork of musical styles. In some ways this means it struggles to form a cohesive whole, but on the other hand it’s hard to conceive of a more perfect showcase for Brendel’s versatility.

‘The Devil Closed The Door On Me’ opens the album in fine blues rock style, equal parts AC/DC beer-soaked riffery and 70s denim-and-leather sass. Brendel unleashes her powerful, raspy rock voice over a bulldozing riff. The lyrics are, typically for Brendel, playful and funny, as she plays with the rock stereotype of a rock singer that’s mad, bad, and dangerous to know: “the boys all want to sleep with me / Just be my friend, invite me round for tea“. As is evident elsewhere, Brendel and Dunham can deliver a fine pastiche, but they never allow it to become too po-faced.

“I never get bored of being adored / I never get tired of being admired“, sings Brendel, opening ‘Adored’. The irony of the talented Brendel – a striking talent who’s spent so much of her time over the last two decades in the world of tribute bands, well-regarded whilst never managing to make waves in an industry that was briefly hers for the taking in the early 90s – delivering such a line is staggering, beyond bittersweet. A sweet but lyrically barbed mid-tempo number, it finds room for a lengthy, nimble guitar interlude from Dunham that never feels showy.

‘Slap Me And You Die’ – great title – is another riff-based rocker, its feisty verses the skin around a core of what can only be described as heads-down prog metal with a gallop that Iron Maiden would be pleased with. The rock is then abruptly replaced with a New Wave/power-pop hybrid: ‘Accessorise’ is a shorter number with a Garbage-esque feel, complete with treated vocal, layered effects and heavily processed percussion. It is, however, instantly memorable. This in turn is followed with another total change of pace, as ‘Tumbling Away’ dispenses with the rock bluster altogether, swapping it for a vaguely Massive Attack-style drum pattern and a more melancholy vocal, which is cleverly interspersed with lines of backward-masked vocals. The effect is mesmeric, and the track very effectively shows off the softer side of Brendel’s voice.

‘A Little Act Of Defiance’ opens with Brendel singing softly over a repeating piano figure, but soon takes a turn for the more dramatic. Of all the songs here, this is in many ways the closest to Brendel’s time with The Violet Hour, its progressive tendencies given room to unfold and develop over a six-minute running time; by the time it arrives at its suitably epic finale, it’s built up quite a head of steam. Some metallic syncopated riffing and an almost Muse-like arpeggiated section lend it a formidable momentum, and it’s easy to imagine that this one could be a real stormer when played live. Drummer Steve Clarke is particularly worthy of praise here, as his frantic fills and thundering bedrock of drums really helps give the track an extra frisson. The title track follows; an altogether more whimsical offering, its lyrics a list of contradictions delivered over harmonica and a lilting acoustic backing. It’s strikingly low-key after the fireworks of the previous track, and this contrast serves it well.

‘Still Running’ adopts a sterner tone, bass and a ticking percussion pattern underpinning swirling strings as Brendel delivers possibly her finest vocal on the album, as Brendel’s protagonist does her best to resist falling under the spell of someone she knows well is bad news for her. The track delivers a lot of sonic tricks, from treated vocals to sudden assaults of programmed drums and even an all-too-brief guitar solo before winding down to an exhausted halt.

In some ways, ‘Still Running’ is the real final track, the showstopper you would expect to find at the end of the record. The actual final track, ‘Life Is A Mushroom’ is… well, where do you go after a title like that? Possessed of a funky vibe that’s equal parts Yes circa Fragile and Parliament, it’s Stax-y vibe forms more of an epilogue to the album than a true end. Possessed of some clearly deliberately silly lyrics, it nonetheless provides Brendel with another opportunity to demonstrate her versatility, as she plays with a lengthy, chanted, spoken-word section. It’s all very silly indeed – although at the same time it’s sure to bring a smile to the faces of those who enjoy the more obvious influences. In that sense it’s as affectionate a pastiche as Zeppelin’s ‘The Crunge’ or (lord help us) ‘Hot Dog’. The only danger here is that as the last track on the record, it is perhaps not the best track to leave as the last sound in listener’s ears as the album ends. Then again, Brendel’s existing fans will know not to expect the predictable – her inability to play it safe is at least part of what endears her to her listeners.

Over two decades since her time with The Violet Hour, Doris Brendel remains unpredictable, willful, funny, powerful, devastating, melancholy and a hundred other things, often several of them at once. All her records reflect her restless muse, never doing any one thing for too long before moving onto something else surprising and unexpected. In some ways this is her achilles heel: it’s hard to say what Brendel’s sound or style actually is, which can sometimes make it difficult for new listeners to get a handle on her work. At the end of the day, perhaps that’s just how she likes it – and if any record serves as a good sampler of her eclecticism, then this finely-wrought record could well be it. Crisply produced, beautifully performed, and unpredictable as all hell, Upside Down World is the sound of one of the UK’s great undiscovered singer-songwriters following her fearless muse with a collaborator who clearly enjoys and understands her versatility.