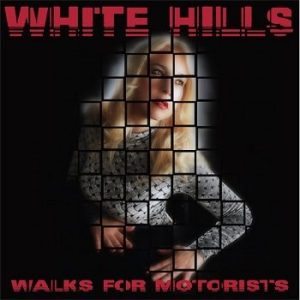 And this is where, in one quick moment, White Hills make a markedly big change in sound and once again prove themselves to be one of the most exciting bands around. In the past we have distorted guitars, spaced out rhythms, couplings with Gnod and now, post punk gothic-ness. If we were being glib you could say this was the best album Bauhaus never released.

Not that there is anything slightly derivative about Walks For Motorists. In fact, this album is one exciting romp into the dark side of the soul with enough panache to make it possibly the Brooklyn duo’s finest release so far. Heady praise considering their, at times, incomparable back catalogue but the crux of the matter is, a change is as good as a rest.

Maybe the clues were already there, ensconced in deepest darkest Wales where this album was recorded, images of Ego Sensation cavorting around with nature whilst Dave Hills takes apart fuzz pedals introduced a playful aspect to the band. Then came the promo shot, a glamourised, airbrushed portrait of the two members bringing to mind some cunning ploy thought up by the Eldritch twins. Finally, the opening chords of ‘No Will’, a song which blasts its way out of the wilderness into some dark, twisted daydream. Goth? Well yes, but also White Hills. And lots of White Hills.

The album feels almost throw-away in its delivery in that it sounds like Dave and Ego are having so much fun in playing these songs. Gone are the extended and dense layers of music and in place is a much more direct sound hinted at in some of their recent gigs. Not that their spaced out sound is completely gone though as ‘Lead The Way’ testifies with its almost never-ending coda which aims straight for the heart of a trance like feel.

In many respects this feels like Ego’s album more than Dave’s. You get the feeling that on songs such as ‘We Are What You Are’ and ‘Life Is Upon You’ that she was taking the controls of the music. This is just an instinct though and we must always remember the immense riffs that Dave H seems capable of throwing out in his sleep. It’s almost disparaging in the way they just spout out these songs and leave you shell-shocked with the sheer ease of delivery.

It may jar for some fans but ones who truly respect White Hills for what they are will find much to adore here. It will be interesting to see which way they head next as here is a band who have never stood still for a minute, so much so that they seem determined to discard the past in search of something new. That’s for another day though and for the time being we have this quite remarkable album to devour, and devour it you will. After all, why wouldn’t the idea of White Hills gone dark appeal to you?