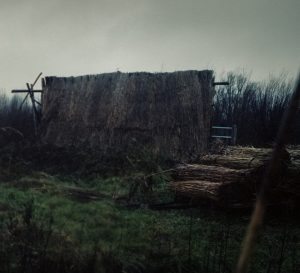 Released on March 6, 2015 via ConSouling Sounds

Close in spirit to fellow Belgian one-man soundscape explorer Syndrome, this is on the sombre and ambient end of the droney spectrum, though it does have its moments of darkness and melancholic unease. First, the title track sets out a mournful, bell-ringing-in-an-empty-sky guitar line, which descends in steps before wheeling back up again and setting out into the same rut endlessly. Some subtle lower-string work supports these clear sad repetitions, and the upper melody goes round and round like a single wobbling bird, inexplicably the solitary amnesiac survivor on a Penguin Race toy from the 1980s. This insistent monotony is simultaneously unavoidable while sending your attention elsewhere, so the nuances of the pastel washes have space to emerge, gather into clouds, crystallize into wiry tendrils and then drift apart.

Here and across the drizzling muted landscapes of this release, there are significant changes in theme and style in both the long tracks, but the transitions are smoothed over with such gradual, imperceptible development that each movement melts into the next in soporific brainfuzz. Eventually, interminably, the drone envelops then obscures that lightly clanging guitar line in airy, but ominous gloom. What started as a forlorn rain-streaked train journey across the flat expanses of the Low Countries is now a fumbling wander through cold fog, and the hints of recognition through the murk are bleak and unfriendly. But hints of deliverance break through, at first a subtle, fleeting chord change and then a single, high, clinging bell reverberates. The shifting tones and growling mists begin to have faint echoes and edges of choral singing, which become more pronounced until they too in turn become fading background to a more electrically charged buzzing resonance.

I wrote about the previous track and the Belgian landscape before sticking the second track title, ‘Het Vlakke Land’, into google translate and discovering that it means the Flat Land… Here then is a similarly single-planed exploration of slowly evolving change. Swooping, circling notes make the beginning more initially pleasing than the first track, though there is similar attention to detail in the lumbering, subtly swollen or spaced-out droning foundations. This heady, wilting reverie is slowly overtaken by rising turbulence, an esoterically accessed secret expansion of that split second moment when you turn onto the Underground platform and you’re alone as the train swooshes into nothingness. But here it’s spun out into a slow world of strange weightless confusion and anomie, before a final lapse into thick, reverent, hum. Evocative, introspective and well-balanced, this is a promising debut exploration of ambient drone textures and transitions.