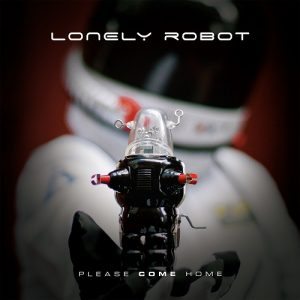 Released on February 23, 2015 via InsideOut Music

Lonely Robot is not a band so much as a project, a project conceived and helmed by veteran guitarist and singer/songwriter John Mitchell. Mitchell is probably best known these days as long serving guitarist for British progressive rockers Arena and for replacing previous front man Francis Dunnery in much-loved 1980s progressive rock legends It Bites, who returned to active duty in recent years following a lengthy hiatus. Mitchell has also enjoyed time as a collaborator in progressive rock supergroups Frost* and Kino, and has made numerous guest appearances with other bands, notably the Milton Keynes-based Touchstone, who he has also produced. In short, Mitchell is a bit of a renaissance man, equally at home on both sides of the studio wall and with a sizeable list of credits as a songwriter, producer and performer.

In some ways, this, the first record under the Lonely Robot moniker, could be considered his first truly solo work, although he was the driving force behind another band, The Urbane, who made two well regarded albums (1999’s Neon and 2003’s Glitter). Even with this latest project, though, Mitchell has chosen to use a project name rather than his own, and whilst he is the sole writer here, the record features a veritable cornucopia of guest musicians. The uncharitable might be forgiven for thinking that this may be indicative of some lack of confidence; the more generous, that this is reflective of humility or a refreshing lack of ego. One listen to the album, however, utterly disproves the former assumption, and whilst it may be entertaining at first to play ‘spot the guest musician’ (Marillion’s Steve Hogarth, for instance, makes several appearances but may be harder to spot than you think, given that he plays piano as much as he sings backing vocals), for the most part you will soon forget about the stunt casting.

As befits many a progressive rock project, Please Come Home comes with its own conceptual thread. It takes the ‘ancient astronauts’ ideas of writers such as Erich von Däniken and posits that our ancestors, rather than receiving visiting aliens as gods, were actually transplanted aliens themselves, explaining the comparatively advanced knowledge some of our ancestors possessed related to astronomy, science and architecture. Mitchell uses this theory as a jumping off point for a succession of reflections on our development as a species, the human condition and the personal struggles we face as we look to the future and our exploration of the cosmos. Nothing too broad and ambitious, then…

Happily, Mitchell possesses far too strong a melodic sense and knack for drama to allow the scope of the project to overwhelm him. In all of his prior projects, he has demonstrated a keen sense of light and shade and a real skill in crafting memorable melody lines; his mastery of both disciplines allows him to straddle the usually mutually antagonistic territories of pop and progressive rock in a way that will delight adherents of both.

The album kicks off with ‘Airlock’, a moody introductory instrumental that opens with icy piano and a low, menacing drone, before exploding into a shower of thunderous drums and Mitchell’s trademark soaring lead guitar lines. In some ways this opening salvo is reminiscent of the start of Sound Of Contact’s Dimensionaut, which, given the spacefaring imagery involved, isn’t difficult to understand. Mitchell is a phenomenal guitarist – his guitar lines are effortlessly melodic and work beautifully to build and release tension through the track. The track builds into a crunching riff before crashing to a halt, giving way to the more anthemic ‘God Vs Man’.  This second track is built around a heavy rock riff worthy of Audioslave, its light, spacey verses interspersed with doomy, crushing choruses. Mitchell sings for the first time on the album here; for those who haven’t heard latter-day It Bites or Mitchell’s earlier work with The Urbane, it may come as a surprise that he is a very capable vocalist, his gritty voice recalling the likes of Ray Wilson and latter-day Peter Gabriel.

Third track ‘The Boy In The Radio’ is perhaps more typical of the album as a whole; nicely voiced by Go West’s Peter Cox in the first of several more obvious guest appearances, it’s a propulsive, anthemic number that displays Mitchell’s finely honed talent for broad melodic lines and an anthemic chorus. This is followed by ‘Why Do We Stay?’, which sees a switch to a more reflective mood, as Mitchell and ex-Mostly Autumn vocalist Heather Findlay duet effectively on a song of loneliness and regret, Mitchell serving up a lovely, languid and emotive mid-song solo, it’s tragic beauty unaffected by its brevity.

Perhaps the proggiest cut here is ‘Lonely Robot’ itself, an 8-minute mini-masterpiece that manages to somehow consolidate the various disparate elements of the album into a single cohesive statement. It has a huge, anthemic chorus of the type that Mitchell writes so well, but it also crams in some nifty soloing (Frost* aficionados will delight in keyboardist Jem Godfrey’s unmistakable guest appearance), some spoken word narration from actor Lee Ingleby – employed throughout the album in a way that helps tie the disparate strands of the narrative together – and a gloriously effective light-and-shade interlude where floating celestial melodies are repeatedly steamrollered by a lurching metallic riff before percolating back to the surface once again. It’s sturdy, earthbound progressive rock, but shot through with a soaring gift for melody that makes it naggingly memorable; an instant ear-worm. It’s this seeming dichotomy that typifies Mitchell’s work on the album, and gives a lie to the oft-expressed idea that progressive rock has to be ‘difficult’, or it somehow is not authentic. The moment as the fists-in-the-air chorus of this track accelerates towards the horizon is one of the most joyous and irresistably memorable musical moments on what is clearly by now a finely wrought and wonderfully imaginative album.

‘A Godless Sea’ dials the up-and-at-’em momentum down to a steady canter. A mid-paced song built around a simple cycling keyboard line, it’s magically enlivened by Mitchell’s decidedly Gilmour-esque guitar, that weaves around the melody before delivering a beautifully expressive and suitably cosmic solo that will have Floyd fans levitating with delight. That its spacey splendour is followed by the engaging and instantly addictive ‘Oubliette’ is a masterstroke. ‘Oubliette’ features another guest in the shape of Touchstone’s vocalist Kim Seviour. Seviour and Mitchell are a perfect pairing, playing off each other’s vocal lines with an infectious delight, and the song features another fabulously memorable chorus – Mitchell clearly has a real gift for this sort of thing. Seviour sings in a slightly lower register than is typical of her work Touchstone, but it works incredibly well. Touching and alluring, it’s yet another highlight on an album already heavily loaded with them. Even this song flirts with the progressive rock tendencies explored elsewhere, as what is essentially a lavishly produced pop/rock hybrid goes off on a tangent for an extended bridge section with numerous stops and starts that build further tension before a triumphant final chorus. It sounds like it could be a hit single. In another universe, it might already be.

‘Constuct/Obstruct’ is musically one of the simplest tracks on offer here, built around a simple repeating figure that varies little over its five minutes plus length; yet somehow Mitchell manages to ensure that you don’t even notice this, as it’s narrative verses are barged out of the way by a breathless, energised chorus that floors the musical accelerator pedal. When the songs drops quite abruptly out of the rhythm halfway through, Mitchell’s effortlessly kinetic guitar picks the listener up and carries them along before dropping them back onto the track to be swept up in proceedings again. It’s not a new trick, but Mitchell carries it off better than most.

‘Are We Copies?’ builds on a steadily climbing rhythm to deliver a blustering rocker that builds from the simmering tension of the verses into an explosive technicolor chorus. The last three minutes are dominated by a crunching riff, shot through with Mitchell’s dazzling lead guitar work that drops away to near silence, allowing Ingleby to deliver further narration, before exploding into life once more.

‘Humans Being’ returns to the mellower vibe of ‘Why do We Stay?’, although the mood here is more introspective. A lilting ballad, it features one of Mitchell’s most effective lead vocals on the whole album and a truly wonderful guest guitar solo from none other than Nik Kershaw. It provides a real old fashioned lighters-aloft moment at the close of the album, a gloriously widescreen display of catharsis as endearing and effortlessly emotive as it may be predictable. A fine lyric is just the cherry on the cake: indeed, one of the things that sets this album apart from its peers are Mitchell’s lyrics, which craftily interweave themes and concepts to intriguing effect. In the grand tradition of progressive rock, there’s more going on here than is immediately apparent, and some of the pleasure to be gained is in the continued exploration of Mitchell’s ideas. Whilst die-hard prog bores may sneer at the commercial feel of Mitchell’s record, appearances may be deceptive: this is not a slight or simple album.

The last word is left to ‘The Red Balloon’. Utterly at odds with the rest of the album in term of mood, this sparse piano/vocal duet is more of an epilogue than an integral part of the album, but in its highly emotive simplicity it acts very effectively as a coda to ‘Humans Being’ and to the album as a whole. The effect is decidedly Gabriel-esque. Close your eyes and it could almost be…

It’s very hard not to be hugely impressed with what Mitchell has achieved with Please Come Home, especially given its relatively brief gestation period. Whilst Mitchell’s work with a variety of acts may have earned him notoriety and respect, in some ways this is a first glimpse of the man behind the curtain, of just what John Mitchell sounds like away from the constraints of whichever band he is working with at any given time. Ungoverned by such limitations, Please Come Home is the sound of Mitchell reaching for the stars. Simply put, this is his finest work and a tremendous showcase for a musician who not only has something to say but knows exactly how to say it.