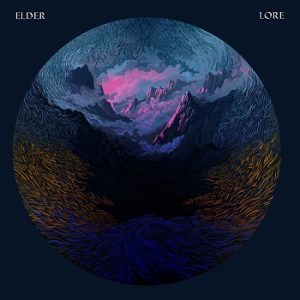 Released on February 27, 2015 via Stickman Records (EU) and Armageddon Label (US)

My first real experience with Boston stoner trio Elder was watching them in the tiny Silk City Taproom in Florence, MA. I already knew and loved their two most recent (at the time) releases, 2011’s Dead Roots Stirring and the follow-up EP Spires Burn/Release, but if you’ve ever seen a supremely talented band play to a packed house on a cramped stage, then you know how much impact a performance like that can have.

The band has since climbed much greater heights, flooring crowds at Roadburn and Desertfest, and building themselves into one of the most beloved bands in the underground. That has, obviously, led to much anticipation for a new full-length, and Lore delivers on every last ounce of hype. Dead Roots Stirring and Spires Burn/Release were already unique entries in their field, but Lore is a completely different monster, full of twists and riffs and turns and riffs and more twists and more riffs.

The album’s biggest strength is what, in my opinion, has been Elder’s main defining feature since Dead Roots Stirring pulled the band out of their Sleep-worship phase – namely, their sharp ear for beautiful melodies. The pretty guitar lines that made ‘Release’ and ‘Dead Roots Stirring’ so stellar are back, and arguably better than before, thanks in part to a few new tricks the band has added to their repertoire. The acoustic work in ‘Spirit at Aphelion’ is absolutely stunning, and the Thin Lizzy-inspired harmonies hinted at on previous releases are ramped up in album opener ‘Compendium’ and during parts of ‘Legend.’ The band works in some keyboards as well, most notably in the midsection to Lore’s fifteen-minute title track; those familiar with DiSalvo’s side project Gold & Silver will find the mellotron used to similar effect in the album’s centerpiece.

Structurally, the album is Elder’s most dynamic to date. While the band has never shied away from long songs with complex structures, Lore is the least predictable of the bunch, with some of the songs veering into unexpected territory at times. Thankfully, Lore feels remarkably unified despite the weaving and winding, and Elder successfully navigate the pathways while avoiding the pitfalls of incoherence that trap many bands that opt to move into proggier territory. The album feels a little more exciting and energetic as a result, compared to the more relaxed nature of Dead Roots Stirring, and when you look at both albums with Spires Burn/Release in the middle, the transformation makes perfect sense.

Lore is the product of a band that could have rested on their laurels and delivered more of the same, but didn’t. Elder were already on to something special four years ago, and I doubt many would have complained if they had stuck to their guns and kept rolling with what they had. But instead, they chose to keep pushing forward, and they’re better off because of it. Lore gives the sense that the band has finally arrived at the sound they should be making, but that should not be treated as an indication that Elder is done evolving.

For now, though, they’ve done extraordinarily well, and you should expect to see Lore on many year-end lists come December.